For the last couple of days Egri Nök has been translating German news articles like mad and posting them at Vlad Tepes. I’ve collected four of them below; all were originally posted at Vlad’s place in a slightly different form. 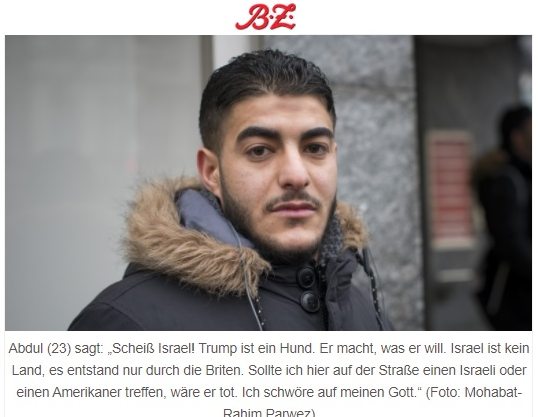 Berlin: “If I encounter an Israeli or an American here in the street, they would be dead.”

After Burning Stars of David: This is how Great the Hatred for Israel is in Berlin

Since Donald Trump’s decision to move the US embassy to Jerusalem, the atmosphere among Muslims is seething. They burnt Israel flags in Berlin. Just how big is the hatred?

At a hate-demonstration at Brandenburg Gate, Israel flags were burnt. B.Z. talked to young Muslims in the problem district Neukölln [Berlin]. What is their opinion on Israel and Trump’s decision to recognize Jerusalem as its capital?

Disturbing: After just a few minutes, several young men positioned themselves against Israel.

B.Z. think it is important to document their statements so that politicians will react to this.

Abdul (23) says: “F*** Israel! Trump is a dog. He does as he pleases. Israel is not a country, it came into being only by the Brits. If I encounter an Israeli or an American here in the street, they would be dead. I swear by my god.” (Photo: Mohabat-Rahim Parwez)

Mamonn (30): “Trump has no right to speak about Palestine and Jerusalem. It’s not his country. Jerusalem is not the capital of Israel. It is the old problem: Who has got the right for the land? Israel or Palestine? I attended the recent protest. Israel came and took the land from Palestine. I did not see the burning flags in Berlin, but that is not proper.”

Abdullah (31): “Israel does not exist for me. I think that the US congress and the White House know that Trump is evil. I attended the recent protests in Berlin. We have only this way, only our hope. I am opposed to burning flags. The Israelis are like us. But they divide the Palestinians.”

Hakan (19): “Israel is not a country in its own right, they occupied the land of the Palestinians. I don’t condone setting flags on fire. But somehow one should take a stance against what’s happening in the region. Trump’s idea to move the embassy is moronic.”

[See Vlad’s place for the videos]

Nuremberg: An African man, walking the street in his underpants at 0°C (32°F), attacked a 73-year-old pensioner, knocked her down, and kicked her in the head brutally and repeatedly, in the afternoon of Wednesday, Dec. 13. As of tonight, Friday, the woman is still in intensive care in critical condition.

Passers-by rushed to intervene (not shown in the video) and held the man, until police arrived.

The background of the shocking incident is still completely mysterious. The homicide division Nuremberg is calling for witnesses to get in touch. The attacker, a 23-year-old African, is being held in custody for attempted homicide and grievous battery. 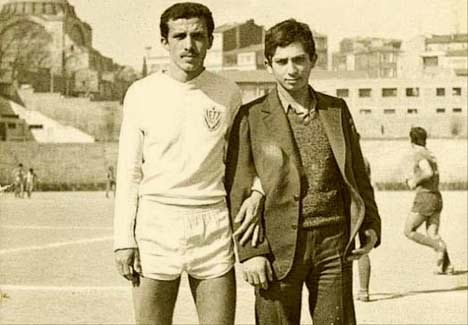 Erdogan Arming Up Turks in Germany Via A Confidant

An original translation from Stuttgarter Nachrichten:

Erdogan’s confidant kindling in the Southwest

Wiretapped conversations that ZDF magazine Frontal 21 and our newspaper have obtained prove: an AKP deputy finances machine guns for the rocker-like group Osmanen Germania. His aim: to fight Kurds in Germany.

Stuttgart — A close confidant of Turkish president Recep Tayyip Erdogan finances firearm acquisitions of the rocker-like group Osmanen Germania Boxing Club. Joint investigations of our newspaper and the ZDF political magazine Frontal21, based on wiretapped conversations and observation, and the findings of German security authorities that both magazines have obtained prove this. Investigators document how Metin Külünk, a close friend of Erdogan’s, and deputy of the Turkish government party AKP, several times handed over money, or had it handed over, to leading members of the Osmanen. From this money, fully automatic guns such as machine guns were acquired, according to Külünk’s instructions.

Additionally, Külünk organized, in close collusion with Erdogan and the Turkish foreign minister Mevlüt Cavusoglu, protests in Germany against the Armenia resolution by the Bundestag on June 2, 2016. In a phone conversation on June 1, 2016, at 10:21 PM, the Turkish premier reserved the right to personally decide about the continuation of planned protests in Berlin, and to promptly give Külünk new instructions. Osmanen members were involved in the protests in Berlin against the Bundestag’s disputed decision.

Külünk had the former Mannheim chief of UETD (Union of European-Turkish Democrats, a EU-wide lobby group — translator), Yilmaz Ilkay Arin, request the Osmans to punish ZDF host Jan Böhmermann for his smear poem about Erdogan. Böhmermann was warned, put under police protection, and had to leave Germany for several weeks.

Neither Arin nor Külünk responded to our enquiries.

In phone calls, Arin summoned Turks living in Germany to arm up. He was able to provide “clean” guns, and additionally, had an ammunition dump. The lawyer of the former Osman chief Mehmet Bagci said that it was not possible for him within six days to discuss our catalogue of questions with his client, who is currently in custody for other allegations.

Targets for attacks by the Osmanen Germania Boxing Club are, according to investigators, Kurds who live in Germany, and critics of the Turkish premier. Külünk summoned his compatriots in phone calls to “hit” Kurds “over the head with sticks” and film it and provide the videos to the Turkish state. The videos then were to be used to “deter” possible critics of Erdogan.

An original translation from Focus:

Too Dangerous: Social Workers Not Allowed In Refugee Accommodations On Their Own Anymore

The Social Assistance Office Munich has officially abolished the consultation of refugees by social workers in shelters where there are no security personnel. The social workers were called back even from houses where they were working in child and youth work, Süddeutsche Zeitung reports.

The city justified this measure in a letter to its pedagogic employees with the increase of “verbal aggression, improper social behavior, and threats”. The rule was allegedly already in place since November 7.

Andrea Betz, responsible for refugee aid at the “Innere Mission München”, criticizes the decision as a “dangerous example”, because it was precisely the deployment of security personnel that stirred fear among the refugees, which only would make the deployment of the social workers dangerous in the first place, reports Süddeutsche Zeitung.

In the meantime, 13,000 households in Munich are waiting with highest priority for council housing. But only 3,000 apartments can be assigned per year.

15 thoughts on “The Cultural Enrichment News From Modern Multicultural Germany”