It is often said in this space that Central and Eastern Europe — the former East Bloc nations kept in captivity behind the Iron Curtain until 1990 — escaped the madness of Politically Correct Multiculturalism that has infested Western Europe and is now in the process of destroying it. This is generally true, but that doesn’t mean that large sums of money (think: George Soros) aren’t being put into propagandizing the East in an effort to make it just like the West.

The following account by our Romanian correspondent cxt examines the Islamization of Romania via its schoolchildren. The latest textbooks are now promoting Islam to Romanian fifth-graders in the public schools. 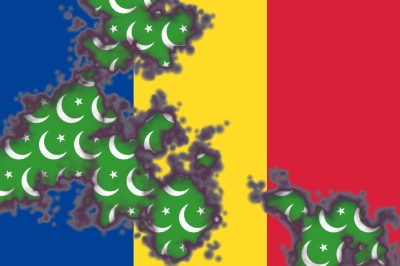 The new history textbooks, that all Romanian fifth-grade children should begin studying this school year were published recently. All seven history textbooks just barely mention Christianity, giving it only a page under the Roman Empire chapter, but dedicate an entire chapter to promoting Islamic civilization. Before translating the news article that made this observation, let’s look at a few examples of Islamic propaganda in public schools from other countries as well.

This article from 2008 talks about ten history textbooks used in USA public schools that blatantly promote Islam. The report that studied these history textbooks notes: “When … Muslims groups attack Christian peoples, kill them, and take their lands, the process is referred to as ‘building’ an empire. Christian attempts to restore those lands are labeled as ‘violent attacks’ or ‘massacres.’” Also, “While Christian belligerence is magnified, Islamic inequality, subjugation, and enslavement get the airbrush.” One such textbook, World History, which was being used by 50% of 9th graders in Florida, contains 36 pages dedicated to Islam and three paragraphs dedicated to Christianity.

The US Department of Education is also funding an Islamic indoctrination program for public schools for grades 5-12, called ‘Access Islam’ (details here and here).

In Spain, courses on Islam are available in public schools for Muslim children between the ages of 3 and 18 The government has agreed to allow local Muslim organizations to draft the course syllabi, choose the textbooks, and even determine who will teach the classes.

For more examples of Islamic indoctrination in public schools in Europe and USA, readers should check out this site.

Questions arise regarding why Islam is aggressively promoted in public schools in non-Muslim countries, and the long-term effects of Islamic propaganda in schools.

The textbooks reviewed by EVZ are developed according to the guidelines given by the Minister of Education. The new school curriculum was developed in the spirit of “Political Correctness”.

Due to the delay in printing the fifth-grade textbooks, we have just now had the opportunity to browse them, not in paper form, but in digital form. We immediately found some surprises that deserve explanations from those who decide what our children should learn.

On the website of the Ministry of National Education there are no fewer than seven choices of history textbooks for the fifth grade in which “Christianity” is treated as the poor and ugly relative of the Roman Empire, and “Islam” enjoys a chapter of its own.

So, what is the new curriculum for fifth-grade history textbooks? Regarding our topic, in the “Roman World” chapter, “Christianity” is the last case study, after “The city and the public monuments (the forum, the aqueducts, the thermae etc.)”, “Colosseum and gladiators”, “Pompeii”, “The Roman Army” and “The Roman Gods. Temples”. As a result, the textbooks allocate barely a page to Christianity, with only one exception where we found two pages.

However, there is a separate chapter on “Islamic Civilization”, where students are expected to learn “The Advent of Islam; the Muslim faith; the military and cultural expansion of Islam”. The textbooks approved by the Ministry of National Education, yes, so called “National”, allocate between four and seven pages to Islam.

The seven textbooks were approved by Order of the Minister of National Education no. 4864 of 06.09.2017 following the evaluation, and in accordance with the school curriculum approved by Government Ordinance no.3393 of 28.02.2017.

“The focus is on diversity and on its acceptance and valorization”

An explanation for favoring Islam ahead of Christianity is found in the curriculum, where it is stated that “In the gymnasium cycle (the history class) has to stimulate the adoption of multiculturalism and multiple perspectives,” but also “the formation of intellectual mechanisms that will prevent the emergence of stereotypes, combat discrimination and xenophobia.” All good and beautiful, we said, that is, our experts have made an ideological manual, according to what progressives call and cultivate: “Political Correctness”. Reading the guidelines further, it became clear that we were not wrong: “At the level of the attitudinal-value elements, the emphasis is on diversity (cultural, social, political, gender etc.) and on its positive acceptance and valorization. Diversity defines the contemporary world, and understanding, acceptance and valorization of differences are fundamental to the acquisition of social and communication skills, with a significant role in the later evolution of the students. Some of the proposed content directly responds to this area of interest by addressing controversial and sensitive themes, issues related to cultural and/or religious diversity.”

Students taught how to pray to Allah

Regarding Islamic civilization, students learn how to pray, also that the “Islamic science and culture” (not even Arab, but directly Islamic) has decisively influenced European civilization. Here’s what the student is encouraged to remember in one of the textbooks:

And in another (textbook), it is said from the very beginning: “In this book, you will learn: How Islam has appeared and spread, which are the holy places of Islam, what made the Islamic civilization remarkable, how Muslims pray.”

Only the fifth-grade curricula have changed this year

The (new) school curricula for the fifth grade apply starting with the 2017-2018 school year. Other (new) curricula will be applied as follows:

Authors can expand the curriculum

It is worth mentioning that the textbooks ultimately derive from the curriculum that imposes certain learning content. Practically, the content needs to be expanded in the book so that children learn everything mentioned in the curriculum. Starting from this idea, each textbook publisher follows the curriculum, but may also have a margin of creativity, according to each group of (textbook) authors.

29 thoughts on “The Islamization of Textbooks in Romanian Secondary Schools”