The following news report by Egri Nök was posted earlier today at Vlad Tepes in a slightly different form. 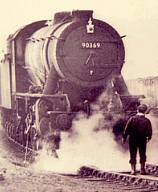 An original translation of a German Federal Police press release.

Munich: Rail block because of persons on the tracks

After seven illegal migrants had already jumped down from a moving freight train on Wednesday morning at the Munich East train station, once again ten migrants coming from Italy were apprehended on the tracks Friday before noon at Grafing.

Munich (ots) – Friday before noon (September 15) there was a track blockage at the Grafing station. Several unauthorized persons were moving on the tracks without permission. Around 10:15, the emergency headquarters of the Deutsche Bahn announced that there were several persons in the Grafing station area. Officers at the scene were able to apprehend five migrants without papers legitimizing their stay.

They had come with a group of several migrants on a freight train from Italy. At Grafing station, they jumped from the moving 44780 train incoming from Rosenheim. Thanks to a helicopter for the Federal Police Flight Oberschleißheim, five more migrants were apprehended who were on and next to the tracks. The helicopter was able to rapidly point the officers on the ground to the five migrants. The ten young men, according to their own statements, came from Cameroon, Nigeria, Guinea (2), Libya (2), Senegal and Ivory Coast (3). At their first interaction with police, the migrants applied for asylum, and were handed over to the Bavarian police. No trains or subways had to use the emergency brake. But due to the search, the tracks were blocked for two hours, which had a significant operational impact.

8 thoughts on “The Cowcatcher Must Have Failed”