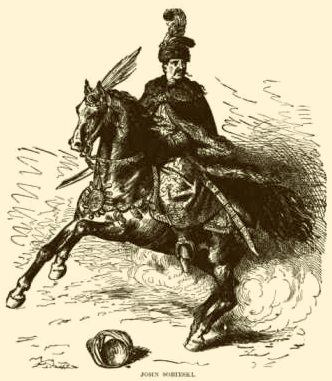 Austria is about to celebrate the 334th anniversary of the breaking of the Siege of Vienna, which took place on September 11-12, 1683. The force that rode to the relief of Vienna was led by King Jan (John) III Sobieski of Poland, who later became known as the “Hero of Vienna”.

On the night of September 11 the king arrived with his troops at the summit of the Kahlenberg, the wooded hill that overlooks Vienna. Early the following morning he led his men in a charge down the hill and routed the Turks before the Gates of Vienna, saving the city.

Last night the statue of King Jan III Sobieski on the Kahlenberg was vandalized and damaged. Below is the report from the Polish news site Wirtualna Polska . Many thanks to Ava Lon for the translation:

Polish monument was damaged in Vienna. The intelligence services are expecting something more serious.

A lot of police, a helicopter circling above — that’s how Kahlenberg Hill in Vienna looks right now, reports Grzegorz Łakomski, Wirtualna Polska. At night, before the celebrations of the 334th anniversary of the Vienna siege at Kahlenberg, two monuments were damaged. Now the police services are waiting in place for the participants in two demonstrations. They fear that there will be an escalation of hatred.

Judge of the State Tribunal and former Speaker of the Sejm [Polish Parliament] Józef Zych was invited to the celebration of the 334th anniversary of the Vienna relief in Kahlenberg. “It’s terrible what happened” — in these words he referred to the destruction of two monuments in Vienna in a conversation with the reporter Grzegorz Łakomski for Wirtualna Polska.

The Jan III Sobieski monument was damaged. It was painted black, and “sh***y” was written on it. Another monument, a Ukrainian one, has also been profaned. The perpetrators are unknown. Rallies by two radical groups were planned for today at exactly this spot.

Will it get worse?

In the evening, at 6 pm, there will be two demonstrations on the Kahlenberg Hill — leftists and neo-Nazis. The reason? The issue of welcoming refugees. One group is for it, others are against it. Both rallies were authorized, the first one for 700 people, the second for 200.

The police secured the area, set the barriers and are keeping guard. The Church of St. Joseph is also being protected.

A large number of officers will be deployed. They are prepared for fights.