The following report by Egri Nökwas published earlier at Vlad Tepes in a slightly different form. 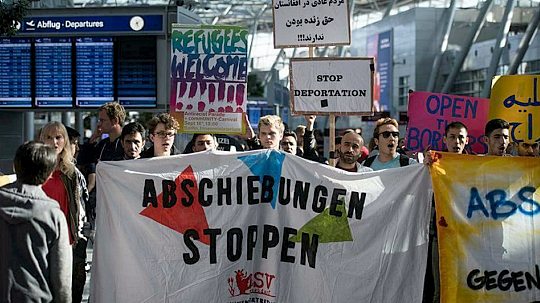 Last Tuesday evening saw Germany cracking down hard and deporting 8 (eight) convicted Afghan criminals. The men were put on a flight from Düsseldorf to Kabul.

The men were taken directly from prison to the airport. Their convictions are:

And still, a coalition of about 180 “refugees welcome” and fake “human rights”* activists gathered in the departure hall of Düsseldorf airport to protest the deportation.

(* we are for human rights, but there is something very much wrong with these activists’ definition in a case like this, hence the quotation marks.)

There are 15,112 Afghans currently residing in Germany who are obliged to leave the country immediately (in theory), and 43,000 whose asylum applications have been rejected but who were given a suspension of deportation.

Last year the district president of the German federal state of North-Rhine Westphalia calculated that under current German practice, it would take 20 years to deport every rejected asylum seeker just from the state of North Rhine-Westphalia alone.

15 thoughts on “Germany: SJWs Protest the Deportation of Afghan Rapists and Child Abusers”