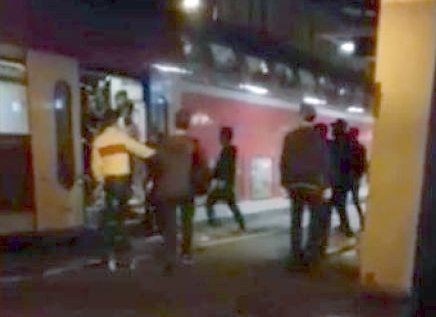 The following series of articles describes several incidents and mass brawls at the festival “Essen Original” in the German city of Essen. There’s an ironic twist to this story that will only emerge in the fourth and fifth articles — so keep on reading

All five of these reports are from the major regional news portal Der Westen, and were translated by Nash Montana.

Essen. “Essen Original”, the city festival that sees multiple bands and about 11,000 visitors every year, mostly went off normally, according to the police.

But one incident on the fringe of the Festival disturbed the peaceful goings-on. According to the police in Essen, about forty people brawled and were beating on each other on Saturday night at the train station.

Once the federal police arrived, the men disappeared.

What groups of men they were is therefore not clear yet. Nobody was injured or has been arrested yet, according to the federal police.

Mass brawl in train after “Essen Original”: Now an eyewitness talks about the disturbing incident

Mülheim. Scenes that witnesses won’t forget very soon: Last Saturday night multiple men were beating on each other on the RE1 bound for Duisburg.

The fight was so intense that after the train stopped in Mülheim, the driver refused to “drive one more meter”.

In an interview with DER WESTEN an eyewitness talks about the disturbing incident now.

“A good friend and I were on our way to a party in Mülheim, when suddenly a whole bunch of black Africans started to attack each other after the last stop in Essen,” she reports. More and more people became involved in the attacks on one another; some of them even had weapons.

“In the end there were about forty people. Some of them had butterfly knives and bats. It was horrible. Children were crying; people fled to other carriages with us.”

At the Mülheim train station she and her friend exited the train, and watched the situation from a safe distance, together with the train driver. Over and over these people exited and entered the train, screaming at each other loud and beating wildly on each other. “I felt like in a gang war,” the witness tells.

Only after about twenty minutes did about eight police officers and a few members of a security detail arrive at the station. But when the mass brawlers heard the police sirens, they all immediately fled in various directions.

Is there a connection with the fight at the Essen main train station?

When DER WESTEN asked, the police wouldn’t confirm whether there was a connection. “Between the call and the first responders in the first two vehicles, only seven minutes passed. A further vehicle arrived two minutes later at the train station in Mülheim,” a police spokesman from the Essen police confirmed.

All of the brawling participants were able flee in the meantime. Exactly like the mass brawl at the Essen train station about 45 minutes previously.

Whether they were the same people is still open for discussion, said the federal police and the Essen police.

Essen. In the night between Saturday and Sunday there were multiple conflicts during the Festival “Essen Original”. Among them incidents at the Essen train station, and also on the RE1 bound for Duisburg, a mass brawl broke out.

One indecent that the federal police responded to took place at the southern entrance of the Essen train station at 12:30am. There a 19-year-old Essen woman was allegedly choked by a 20-year-old. Furthermore, she reported to the police that the man’s friends also were harassing her.

The 20-year-old claims that the young woman insulted his female companion. But that they kept on walking.

Whether the incident happened in the way the 19-year-old Essen woman alleges will be cleared up after further investigations take place.

The federal police are opening an investigation for causing bodily harm.

Essen. The first evening of the Essen city festival “Essen Original” has literally been washed out.

According to the police, many visitors stayed away, and due to heavy rainfall the number of visitors was drastically lower than expected. This could be the reason why the police weren’t as busy as in prior years. “It was very quiet. There’s no comparison to last year”, the Essen police report reads.

The fifth and final report:

Essen. The city festival “Essen Original” sees about 200,000 visitors every year. After the sexual attacks during last year’s festival, the city, police and organizers of the Festival have developed a better security concept.

Concrete blocks have been added, and there will be more plainclothes police officers and bright lights, and the festival stands are closer together in order to provide a better feeling of safety for the visitors.

The festival opened on Friday, September 18th, with the Essen Philharmonic Orchestra. The Orchestra will also perform the closing ceremony on Sunday at 8PM.

Yep — It was the rain that kept people away. What other explanation could there possibly be?

These aren’t the culture-enrichers you’re looking for. You can go about your business. Move along.

3 thoughts on “Brawling and Dissembling in Essen”