We began reporting about Jamaat ul-Fuqra (a.k.a. “the Muslims of America” or “Muslims of the Americas”) back in October of 2005. MOA was founded in the 1980s by Sheikh Sayed Mubarik Ali Hasmi Shah Gilani, a Pakistani Sufi. The rural-based jihad has its headquarters is in upstate New York, but its compounds are scattered all across the USA (including several in Virginia) and in Canada.

JuF split off from the Nation of Islam because it didn’t consider NoI to be hard-line enough — the Fuqra wanted violent jihad. After they fell under the management of Sheikh Gilani they formed a national group, mostly made up of black ex-convicts recruited in the prison system. To this day, although the rank-and-file are Americans, the leadership is based in Pakistan.

Jamaat ul-Fuqra made the news briefly in the fall of 2002, when it was reported that John Allen Muhammad, the (late) elder of the two Beltway Snipers, had holed up for some R &R in the MOA compound in Red House, Virginia during his deadly shooting spree. After that the investigation of JuF went dormant until 2005, when it picked up steam again.

For the past eleven years Martin Mawyer of the Christian Action Network has been doggedly investigating and reporting on the Muslims of America. The group returned to the news recently when one of its leaders was arrested in New York on a weapons charge.

Now it appears that some irresponsible bloggers have been spreading fake news about a raid on the MOA headquarters in “Islamberg”, near Deposit, NY. It’s not true. The raid didn’t happen. In a word, they (the bloggers) were making [excreta] up.

I don’t have to tell you how much damage such fabrications do to the Counterjihad. The culture at large holds us to a higher standard, just as it does anybody who is to the right of center. For that reason, it’s incumbent upon us to be scrupulous about factual information in our reports.

That’s why I’m reproducing Marty’s article about the whole affair. The original was published yesterday at the CAN website:

CAN Condemns False Reports About “Muslims of America”

There have been a number of false and misleading reports over the past couple of weeks regarding an Islamic terrorist organization called “Muslims of America” (MOA) that is headquartered in Hancock, NY.

Misinformed bloggers have been releasing fake news reports about a 70-acre compound, known as Islamberg, claiming that it has been raided by police with the discovery of illegal weapons.

These reports are FALSE.

Though it is true that a member of MOA has been arrested on 15 counts of felony weapons charges with one misdemeanor count of theft, these charges are not based on anything found at the controversial compound located in upstate New York.

Ramadan Abdullah was arrested on June 13, 2017 after trying to steal ammunition from a local Gander Mountain store in Johnson City. The arrest lead police to a storage locker being rented by Mr. Abdullah that contained a number of assault rifles, pistols, ammunition, flak jackets and weapon feeders.

Mr. Abdullah has been a member of MOA since its inception in 1980.

Informants inside MOA have told Christian Action Network that leaders explained that the weapons were destined for Islamberg in preparation for an opposition biker rally that was held on July 15th. The weapons were seized before the rally ever took place.

The sources were dismissive, however, that the weapons actually had anything to do with the biker rally, instead believing they were being obtained for a different purpose.

Still, there is no indication or proof that the weapons ever arrived at the MOA complex or were ever used by members inside the heavily guarded premises of Islamberg.

Articles stating that MOA has been raided, or that weapons were discovered inside the compound, are false, misleading, unnecessarily inflammatory, inaccurate and an exercise of the worst possible journalism.

We ask all those who are sharing this untruthful information to refrain and stop. And we absolutely CONDEMN in the strongest words possible ANY blogger(s) that are stating MOA was “raided” or “found to have illegal weapons” on its premises.

We ask that all such bloggers issue an IMMEDIATE retraction. Any author attributing to CAN that it has reported that the MOA compound was either raided or found to have illegal weapons will face legal action.

More information about Jamaat ul-Fuqra and the Muslims of America is below the jump. 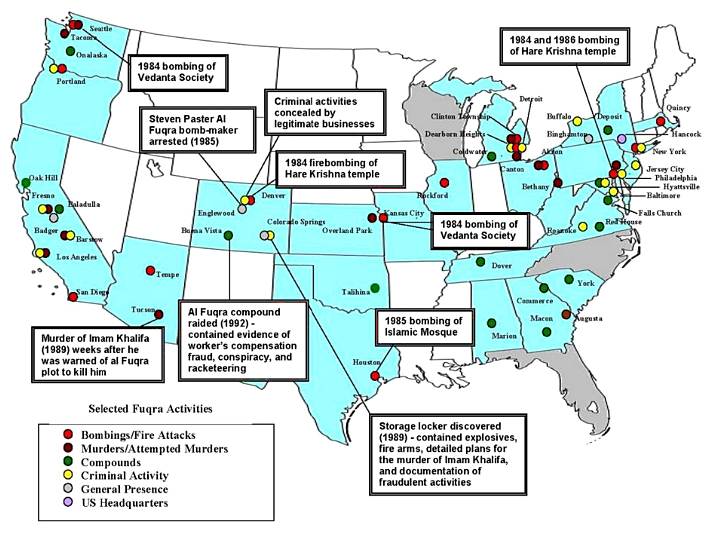