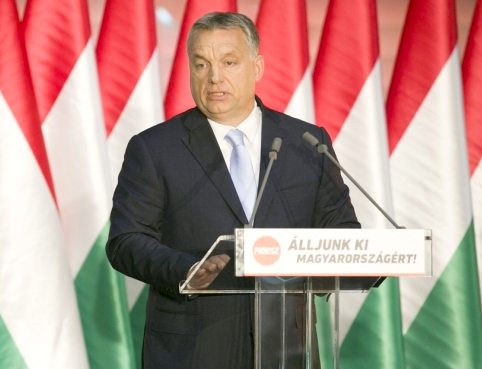 Below is a summary of a speech given earlier today by Hungarian Prime Minister Viktor Orbán. Many thanks to CrossWare for translating this piece from the Fidesz party website:

“Multiculturalism has utterly failed, and they want the price to be paid by all member states of the European Union, including Hungary,” stated the Prime Minister on the Fidesz faction Summit, the closing event of the “Stand for Hungary” campaign on Tuesday in Budapest.

The Prime Minister, referring to Mihály Varga’s [Minister of Finance] speech, stated: “A different answer can hardly be given” whether our economy is successful or not. Nobody could deny the improvement of our macroeconomic numbers, but the criticism just does not want to die down, he said; I believe the situation is that ”we are not successful in the way they would want it”. The global elite wants Hungary to be successful, but they want to be in the first place, with only second place for the Hungarians, he explained, and he added: but the government is opposed to that; it wants the first place the Hungarians to enjoy the fruits of economic successes and only second place for the global elite.

Viktor Orbán emphasized: as long as we have unemployed Hungarians, we should not give jobs to anybody else. He explained that he does not share the reasoning that believes letting guest workers into the country would help the economy. This has a cultural and spiritual side too, he explained: there is a difference between when a community — which owns the country — takes care of all the jobs, including the most difficult and the least respected ones, or whether a country looks down on some types of jobs and “passes” them over to others. “If we want Hungary to be a strong nation, first we must give work to everyone and we have to respect all types of jobs,” — explained the Prime Minister, praising the increase in the minimal wage.

At the event, which closed the political season, he also discussed: Two massive historical questions are pushing Europe today. The first is the problem of illegal immigration, which we validly call the modern-day mass migration. The second is what kind of future we are going to have: Brussels’ Europe, or the Nations of Europe, said Viktor Orbán. He added: The stakes are serious, so there are tremendous forces behind each of these issues.

“We are in the middle of two such arguments, which could determine the fate of Europe for decades and permanently,” he stated. He also drew attention to the fact that all over Europe, with the exception of a few countries, unemployment is very high, especially among young people, while only small portions of the migrants have started to work. Crowning the crazy ideas, with some referring to solidarity, they want to distribute the immigrants with mandatory quotas or with the creation of migrant villages to place migrants to every single member state of the EU. Furthermore, they expect cooperation from those countries, whose opinions they did not even ask when they decided to invite masses of migrants into Europe, noted Viktor Orbán.

The Prime Minister insisted: we do not want to participate in the German experiment in the falsification of history, which tries to blame Hungary for letting the migrants into Europe, instead of Germany. Multiculti has utterly failed, and they want its price to be paid by all European Union member states, including Hungary, said the Prime Minister. The migrants were unwisely let into Western countries; now they want to distribute them into countries who defended themselves and did not let them into their territory, for example Hungary, added Viktor Orbán.

He stated: Hungary suggests that, instead of distributing migrants inside Europe, they should be transported out of Europe. “We want the Europe of Nations, and we are not euro-skeptics. We are euro-realists, who want to build a solid foundation of the European Union on rock, and not on sand,” emphasized the PM. There is only one political foundation that exists, and that is the reality of European nations. Today that is the basis of the Union, he added.

The Prime Minister stated: nobody can order a nation with whom they should live within their own homeland; this must be the sovereign decision of each nation. The illusion of mass integration has failed, said Viktor Orbán, explaining: instead of integration, parallel societies have been created with increasing crime rates, deteriorating public safety and danger of terror attacks.

He added: In the arguments about the future of Europe, nobody else but Europe can decide. The Prime Minister stated: By “Europe” he does not mean Brussels or the leaders of Europe, but communities of European citizens, from Athens to Helsinki and Lisbon to Sofia. But Viktor Orbán also noted: This is not what he sees in Europe; in the cradle of democracy, nobody is asking the people. “Nobody except for us, the Fidesz-KDNP [Young Democrats and Christian Democratic Party coalition] government here in Hungary,” he added, recalling that since 2010, the government has asked the opinion of the people five times on the most important common issues.

The Prime Minister recalled: in the last consultation, which closed on May 31, they asked six questions; all of them were about Hungarian national sovereignty. Three questions were about the migrant crisis, and three about economic issues. Because on all six questions we had agreement, we can say we had “almost full consensus” [+99% support for each question —translator], that our economy’s independence and our migration policies must both be defended from Brussels’ intervention, he explained.

The PM reminded his audience: all six questions received overwhelming support for the government’s viewpoint that we must stop Brussels concerning the migrant crisis, stop the stealthy centralization and deprivation of our rights. The people insisted unanimously that decisions impacting the Hungarian economy should be made here, and we should continue to make decisions about our own taxes, energy prices and any other issues, he explained.

Viktor Orbán emphasized: Hungarians do not want to take in illegal migrants, “not a single one, not temporarily, not at all.” Hungarians have reached a complete consensus that we must do everything in our power to protect the country from illegal migrants, he added. He noted: in the meantime Hungary, in excess of its strength, helps Christian communities living in war-torn regions.

The Prime Minister noted: we have consensus that “we should not let illegal migrants roam around in the country, which would give them a chance to vanish, disappear from our eyes,” but to keep them under supervision until the authorities make a decision in their case.

We have full consensus that any activity helping illegal migration — such as human smuggling and the popularization of illegal immigration — should be punished, he stated.

According to Viktor Orbán, the Hungarian people see right through the deception, and know that a significant portion of organizations funded from abroad secretly organize the illegal migration, and that in “reality, unwillingly or unwittingly, acts as a Trojan horse of terrorism.” This is not only a Hungarian recognition; in Italy this is openly discussed and in the other countries are also finding it harder to hide the fact that human smugglers and civilian organizations that assist immigration are becoming a “shared mafia-network,” he said. He added: it’s understandable if the Hungarians want to know who supports these organizations funded from abroad.

He said the respondents stated almost in unison: Hungarians do not want to hand over the control to Brussels. They do not want to hand over more power, more authority, than is laid down in the original agreements, in the Accession Treaty. Hungary protects the European accomplishments and values; it is a strong and proud European country, which persists in its opinions and interests, he stated. According to him, we want the original founders’ European Union, not “a Kingdom of Brussels”. Where kingdom would be built, there are kingmakers in the background, as he phrased it.

Viktor Orbán stated: there is such “a self-styled, dedicated and successful financier, who thinks himself superior” in the shadows; “thanks to our rotten luck, he is a Hungarian”; his name is George Soros. He has a plan, he wants one million migrants per year coming from foreign cultures, if necessary by force, against the will of the Europeans, to settle in Europe, he said. He noted: if he really wanted to help, he could bring his money to the location where help is needed.

The Prime Minister highlighted: George Soros is “a speculator operating an extensive mafia network, threatening Europe’s peace and future.” For him, immigration is great business, and it would be even better “if we did not cavil so much,” he explained. He added: “He is especially angry at Hungary and myself, because we block his great plan for cashing in on his great business.” Viktor Orbán said that in the past “we got along well with him under one roof” and we would have kept a peace, if he had not paddled into dangerous waters and if he had not announced his resettlement program, if he had not started to finance the organizations and started to transport the migrants, and if he did not support the mafia network of NGOs and human smugglers.

He stated: today in multiple issues, George Soros gives order to the leaders of the EU and they “bow before him.” They also launched infringement procedures about the mandatory quotas at his order, he said. Viktor Orbán explained: “For us, the weight of the arguments counts, and not the origin of the arguments.” Everybody knows the government point of view: zero tolerance for anti-Semitism; the Hungarian Jewish community is under the protection of the government, and as long as “we are responsible for the general conditions of the country, they can count on that protection,” he stated.

The Prime Minister assessed that we will have a heated fall awaiting us; we are facing new hard battles, especially as the elections approach. George Soros will do everything in his power to set up a government in Hungary “that dances as he whistles,” which will tear down the border fence, open the borders to the illegal migrants, he said. He stated that it shows the seriousness of the situation that even Jobbik [Hungarian far right wing party — translator] is caught in his web.

Viktor Orbán emphasized: after the national consultation, our task is to keep calm, see the moral correctness of our politics and be confident of our strength. “We are standing alongside the Hungarian people, and Hungarians support the government against Brussels and Soros,” he pointed out. He stated: we will not let Soros have the last laugh. The Prime Minister closed his speech with his usual “Oohrah Hungary, Oohrah Hungarians” phrase.