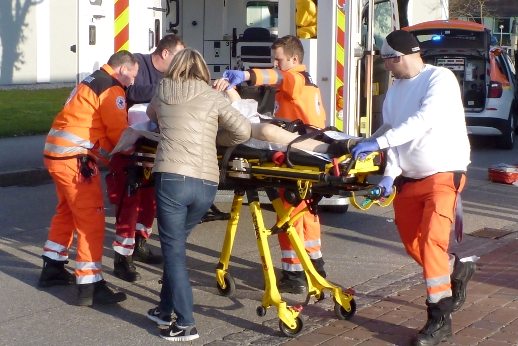 The following two articles describe a culture-enriching murder that occurred over the weekend in Prien, an idyllic little town, almost a resort, near Rosenheim on Lake Chiemsee in Bavaria. The perpetrator is said to have slit the victim’s throat on the street in broad daylight.

Many thanks to Nash Montana for translating this story from Die Abendzeitung München:

Prien: Mother stabbed to death in front of her children!

A horrible crime shook idyllic Prien on the Chiemsee: On Saturday a 29-year-old Afghan man stabbed a 38-year-old Afghan woman. She succumbed to her injuries in the hospital.

Prien — It all happened about 6:45pm in front of the Lidl grocery store in Prien. The 38-year-old woman was about to shop for groceries with her five-year-old and eleven-year-old children, when she was attacked by the 29-year-old. In front of the children the man stabbed the woman multiple times.

Although a policeman who coincidentally just passed by couldn’t prevent the crime from occurring, he was able to detain the attacker with the help of other shoppers, despite the attacker’s massive resistance. The heavily injured woman was brought to the hospital immediately, but she succumbed to her injuries that very evening.

The woman’s two children had to watch it all. They are now in the care of a crisis intervention team and have been brought to a safe location. It is not clear yet what relationship there was — if any — between the woman and the man.

The follow-up article from Merkur.de was translated by Egri Nök:

“Stabbed her in the head and cut her throat”

After the brutal knife-murder in front of Supermarket: Prien is shocked

After the knife-attack in front of a grocery store in Prien, where an Afghan (29) stabbed a compatriot (38) to death, flowers and candles line the boardwalk. The small community is torn between mourning, anger and maypole festivities.

Update, May 1, 2017, 9.35 AM: At request of the office of the district attorney of Traunstein, an order was issued to place the suspect in a locked mental institution.

Prien — incredible scenes Sunday afternoon in Franziska-Hager Street in Prien: passers-by gather on the Lidl parking lot and cry. They are visibly shocked by the knife-murder on Saturday evening in the open street.

“It was incredibly shocking!”

One women from Prien was just about to go shopping and was standing at the reverse vending machine, when a commotion started in the parking lot, and the situation escalated suddenly as if out of nowhere. “I heard panicking screams like ‘He’s got a knife, he wants to kill her!’ It was terrible. A brave citizen, I don’t know if it was the policeman, tried to intervene and to save the woman. Blood was everywhere, it was incredibly shocking!” The woman from Prien looks at the boardwalk in disbelief, rearranges the flower vases that the wind had pushed over. “I will never understand that something like this could happen on the open street in broad daylight.”

A young firefighter also still can’t grasp it: “We removed the blood stains from the street in the evening,” he says, his voice faltering. He had difficulties sleeping and suffered nightmares. “If you think about how small Prien is, and even so something like that happens here, it is incredibly sad. People don’t really dare to leave their homes anymore!”

“Stabbed her in the head and cut her throat”

Friends of the firefighter witnessed the terrible scenes. According to them, the suspect was initially sitting on a bench, opposite the entrance to the grocery store. From there he attacked the woman as if out of nowhere when she was just leaving the supermarket with her two children. “He attacked her from behind, stabbed her in the head and cut her throat. Then he kept stabbing his victim as if her were in a trance. An incredible cruel, bloody deed!”

Prien on the Lake Chiemsee is torn: on the one side, mourning, despair and shock, on the other side high spirit at the maypole celebrations.

19 thoughts on “Halal-Compliant Murder in an Idyllic Bavarian Town”