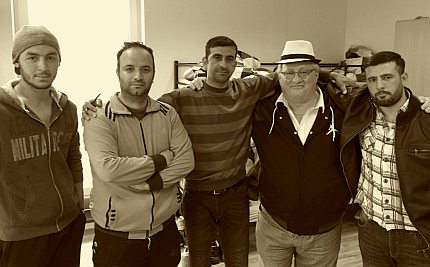 Tuvia Tenenbom is an usual animal in the European menagerie: a liberal Polish-Jewish-German who supports the right to free expression and the importance of being able to hold and voice independent, politically incorrect opinions.

Many thanks to Egri Nök for translating this interview from Der Spiegel:

Tuvia Tenenbom among the refugees

“You Germans really think you are something better”

The controversial author Tuvia Tenenbom on the most controversial topic of German policy: For his new book, he was “Alone among refugees” — and he met neighbours, Akif Pirinçci, and Gregor Gysi.

An interview by Kaspar Heinrich

Tuvia Tenenbom, born in 1957 in Tel Aviv, is from a German-Jewish-Polish family, and has been living in New York since 1981. He works as a journalist, essayist and dramatist, and has written for numerous newspapers in the USA, Europe and Israel, among others for Die Zeit. In 1994 he founded the Jewish Theater of New York. His most recent books were “Alone among Jews” (2014) and “Alone among Germans” (2012) and “Alone among Americans” (2016).

Tuvia Tenenbom answers questions about his new book Alleine unter Flüchglingen (“Alone Among Refugees”) in the Alte Handelsbörse in Leipzig. During the conversation there is discontent in the audience; not everyone agrees with the author’s provocative statements on right and left in Germany. Some of his wording raises eyebrows; some of the audience even leaves the room.

SPIEGEL ONLINE: Mr. Tenenbom, how is it going for the media landscape and the freedom of opinion in this country?

Tenenbom: There is no journalism anymore, particularly not in Germany. Instead, there is activism. Journalists do not report anymore on what is happening, but what we ought to think. Carolin Emcke, who received the “Peace Prize of the German Book Trade”, is an activist, not a journalist. She preaches.

SPIEGEL ONLINE: So for you, the best journalists are those…

Tenenbom: … who report about the facts. Not those who tell us what is wrong and right.

SPIEGEL ONLINE: But isn’t it essential to stand up against hate, like Emcke did?

Tenenbom: No. You can do that in your private life, but not in journalism. If I were a jeweller and selling you a diamond, I do not do so only when you believe what I believe. It is not a journalist’s task to preach to the masses. The jeweller should sell you what you want, and the journalist should tell you the truth. No more.

SPIEGEL ONLINE: What exactly is changing right now in the media landscape?

Tenenbom: The New York Times is on a mission called liberalism — whatever that means. For these liberal minds, it is: my opinion counts, yours doesn’t. It is even more pronounced in Germany, as you can see with the example of Akif Pirinçci. Think of him what you want, but he has a right to his opinion. The large publishing houses had to admit in court that they had misquoted him. But he is still under boycott. Random House cancelled their contract with him; you cannot even buy his cat books anymore.

SPIEGEL ONLINE: Random House is a private company. The publisher has a right to select their authors.

Tenenbom: But if they were to decide to publish only white authors, no blacks, it would go to court, and they would be stopped there. This is the same. No company has the right to damage others. 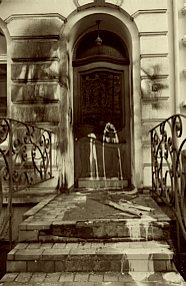 SPIEGEL ONLINE: But besides his ambiguous KZ-quotation, Pirinçci apparently has racist and inhumane opinions.

Tenenbom: On first glance, correct, on second, wrong. Yes, he insults Muslims and Islam. But he is a Turk, and dark-skinned. When a light-skinned German insults Christianity and mocks Christ and the Pope, he will end up as the director of one of the best German theaters. When a Christian insults his own religion, he stays a free man, he will even be applauded for his free spirit. Pirinçci did exactly the same, but as a Muslim. So is he a racist now?

SPIEGEL ONLINE: One does not make the other better. It remains: Pirinçci has racist opinions.

Tenenbom: Then withdraw his racist books from circulation. But this man is also the author of love stories and cat novels. How can you condemn all of his works? If you do that, condemn Wagner too. He was a Nazi beyond doubt.

SPIEGEL ONLINE: In your book you call Pirinçci a “free spirit”, the alt-right editor and publicist Götz Kubitschek a “nice chap”. Aren’t you being naïve?

Tenenbom: I am not naïve. I am well aware of what they say and think. But in order to meet someone respectfully, or to like them, I do not have to share their opinions. And besides: What Götz Kubitschek says, and also, what Lutz Bachmann says, is what every second person in the USA thinks.

SPIEGEL ONLINE: That does not make it better.

Tenenbom: What I want to say is: Are we supposed to treat all Americans that way? No. And do you know what? Many Germans think the same, but they are afraid to say it aloud. So what? All these people may call themselves Europeans. There is a conflict between one attitude, which is older, which aims at preserving your own culture — call this narrow-mindedness if you wish — and another movement, who does not want borders and national states and wants to mix cultures. Those are two legitimate opinions, two legitimate desires. Let the vote decide! But don’t call people Nazis just because they wish to preserve German culture.

SPIEGEL ONLINE: You spoke of liberalism. What does it mean to you?

Tenenbom: Diversity of opinion. We have an open door for everyone, everyone has the right to his opinion. Lutz Bachmann just as much as Gregor Gysi. And I think I treated them both the same. I do not see a difference between them. There is one, contentwise, of course, but it does not make one better than the other. Democracy ultimately means: the majority makes the rules. If the majority abuses their power, the highest court will decide against them. This is how it should be. But not by insulting people, boycotting them, or smearing them, just because their opinion is not politically correct.

SPIEGEL ONLINE: For your book Allein unter Deutschen, you travelled through Germany for six months in 2010. Last year, you were on the road again, this time “Alone under refugees”. How do you experience the country today?

Tenenbom: We have the really extreme case here of a country that was not an immigration country, and now suddenly has decided to be one. To walk through the streets and hear so many people speak Arabic. It is quite an extreme change. The whole West is moving in one direction — God knows where — but Germany is moving ten times as fast.

SPIEGEL ONLINE: How did the Germans meet you?

Tenenbom: Many told me how proud they were of what their country is doing. They were proving that they are good people, better than others. And I thought to myself: Deutschland über alles. You really do think that you are better than others. We are all the same, when will you finally get it?

SPIEGEL ONLINE: Do you think Germans are liberal?

Tenenbom: No, I do not buy it from them. Not what I mean by liberal. There still is anti-Semitism here, and if I just argue long enough with someone, I will be “the Jew” in the end. That is how it is, and I cannot do anything about it. Even when the Germans welcome the Syrians, they do not welcome me. Of course not all of them, don’t misunderstand me. There is no “all”. But there is this attitude.

SPIEGEL ONLINE: Some things in your books appear quite simple. What would you say to the allegation that you simplify in your assertions?

Tenenbom: I spent fifteen years at a university. If you want me to dress everything in smart phrases, I can do that, sure. But the most important lesson that I learnt from my religious studies from the Rabbis was: If you can’t explain it in simple words, you did not understand it. I try very hard to explain things simply, even if they aren’t simple.

SPIEGEL ONLINE: Because the world is complex.

Tenenbom: All people are complex, and I can make everything more complex all the time. But the final question is: “Do I like ice cream?” And the answer is: “Yes, I do.” Could I explain in complicated expressions why I like ice cream? Yes. The reasons are manifold, it has to do with biology, with chemistry, all sorts of things. But what counts in the end? Instinct. That is why people go to war, that is why they marry. In the end, we do not think in complex ways, because we have the ability to leave the complicated aside and focus on the simple.

SPIEGEL ONLINE: In your book, you describe the terrible conditions in German refugee shelters, the lack of privacy, broken toilets with no paper or water, the bad food.

Tenenbom: Germany took in the most refugees in all of Europe, but the way they did it was plain bad. They did not understand a lot of things. People were packed together with the murderer or rapist of his brother or sister. Basically, to accommodate Sunni, Shia, and Christians in the same room is criminal. I did not expect a paradise, but these living conditions are unacceptable. Germans should only have taken in as many refugees as they can handle.

28 thoughts on “Tuvia Tenenbom Among the Refugees”