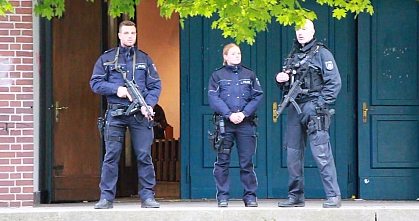 Yet another full-bearded mentally ill person of Middle Eastern origin has surfaced in Germany, this time at a Good Friday mass today in Essen.

Many thanks to Egri Nök for translating this article from the Westdeutsche Allgemeine Zeitung:

Panic at Good Friday Mass in Church in Essen

500 believers in panic during a mass when a suspicious man enters the building. Heavily armed police storm the building.

It was meant to be a contemplative mass on the evening of Good Friday, but became a nightmare: 500 believers fled the Catholic church of St. Thomas Morus in Vogelheim in panic, when an apparently mentally confused man disrupts the service. His Arab appearance apparently reminded the visitors of an Islamic attacker.

Initially, some just feel uneasy when the man enters the room in the church where the Croatian community is celebrating a well-attended mass. When the 33-year-old disrupts it by ostentatiously running around, the first leave, frightened. When suddenly a loud bang is heard, there is no stopping them. “Panic broke out among the believers,” says police spokesman Peter Elke.

Most of the 500 believers in panic storm towards the exit, and a scramble results, in which two women aged 56 and 18 are slightly injured. For some of the elderly visitors at the mass, even though apparently unharmed, it is too much. Outside, they need support by others, and a few later need emergency treatment for circulatory problems.

The police, alarmed by numerous emergency calls, storm the church minutes later. At the confessional, the officers, armed with machine guns, meet a few brave visitors at the mass who stayed in the room and detained the 33-year-old interrupter.

Quickly they realize: “The man was neither armed, nor did he have explosives with him,” stresses Peter Elke. It is unclear where the loud bang came from that scared the congregation and caused the panic. It was probably the cross falling to the floor. The pastor and the acolytes were just solemnly carrying it through the aisle, as part of the ritual, when the man intensified his heckling. Before that, he drew visitors’ attention with his “insane gaze” and scratching at the wooden benches.

No one was directly threatened, however. According to eye witnesses, the man had Arab features and a long beard. It was obvious that the picture of an Islamic terrorist spontaneously rushed through the minds of many believers, according to Peter Elke. This explains the panic. Police can confirm that according to the name in his passport, the man is of Arab ethnicity. “We arrived very quickly at the church with a large and appropriately equipped force,” says Peter Elke. The danger could have been real, after all.

The pastor stayed in the church, too

Besides the men who held him, the pastor also bravely stayed in the church room when the police finally arrested the man. Essen firefighters meanwhile took up the medical assistance of the lightly injured and shocked church visitors, who, after they fled, observed the goings-on from a safe distance.

Quickly there is word that it probably is a “confused person”. As of this evening, no more specifics can be learned; the suspect is being interrogated by police.