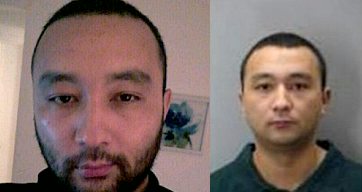 When this story first broke this morning, I thought it was unlikely to be jihad-related.

A woman was deliberately run over and killed in the middle of an intersection in Fairfax County, Virginia (Rt. 50 and Rugby Road, which is roughly in the Chantilly area, I think). Just to make sure she was dead, the perp ran over her twice, then sped away. Police said they were looking for a blond or sandy-haired man.

It sounded like a domestic incident — angry lover-boy runs over his cheating girlfriend. Wouldn’t be the first time.

But then this afternoon the identity of the victim was revealed, and she was 75 years old. Hmm.

Then the perp was arrested, and his name was (is) Kenan Ozcan. A Turkish name. Hmm again.

The news stories listed only his middle initial, M. Yet another hmm.

And sure enough, a little research turns up his full name: Kenan Mehmet Ozcan

In other words, this morning’s deadly incident in Fairfax County has a Mohammed Coefficient of 100%.

It’s a strange form of jihad, however — running down a solo pedestrian. Why not a crowded bus stop, or the parking lot of a popular eatery?

We may or may not ever learn the answer to that question.

I don’t know where Mr. Ozcan was born, but he attended both George Mason University and Virginia Tech. He seems to live in Reston.

He has a police record for armed robbery — several years ago he was arrested, convicted, and jailed, also in Fairfax County.

Some time afterwards he set up this GoFundMe page:

Im a Virginia Tech Graduate , and I have my Masters in Biology, however I have been going thru some tough times recenetly and I am an ex-felon, I thought going to school would change my life and I could really use any support to help my life, I really appreciate it.

It doesn’t seem to have done him much good.

That’s all I have on the story so far. The excerpts below are from various articles posted today, the earliest one first:

The Fairfax County Police Department is seeking suspects after they say a woman was intentionally run down by a vehicle.

The incident happened at about 10:16 a.m. in the area of Route 50 and Rugby Road. An adult female was struck twice by the car, police say.

“The woman was crossing Rugby Road,” said Tawny Wright, Fairfax County Police Department public information officer, in a Facebook Live video. “It looks like the car struck her, turned around and then struck her again.”

Police are looking for a black or blue Chevrolet or Mercedes-Benz sedan. The car was last seen traveling northbound on Rugby Road.

The driver is described as being a “younger” white male with sandy blonde hair. The car has blue and yellow license plates, police say, and it may have front-end damage…

WASHINGTON — A woman killed in a hit-and-run Friday morning in Fairfax County was struck twice by a car in what police are calling an “intentional act.”

The woman, who was struck about 10:15 a.m. on U.S. Route 50 approaching the Fairfax County Parkway, was pronounced dead at the scene. The driver fled the scene in a vehicle described as blue or black Chevy or Mercedes Benz sedan with blue and yellow license plates. Police said the car may have front-end damage.

The woman was crossing Rugby Road, off Route 50, when the car struck her, turned around and struck her again, Fairfax County police spokeswoman Tawny Wright said in a Facebook Live update.

“We’re definitely looking into why this would have happened, whether there was a dispute or a random act,” Wright said.

The investigation is expected to snarl traffic on U.S. 50 for several hours, police said. The westbound lanes of U.S. 50 are closed.

FAIRFAX COUNTY, VA. (WUSA9) — A 31-year-old man is in custody for hitting and killing a 75-year-old woman Friday in Fairfax County, police said.

Kenan M. Ozcan of Fairfax, Va. was arrested and charged with felony hit and run and robbery.

The victim has been identified as Maria Ascencio of Fairfax, Va. Police say she was pronounced dead at the scene.

Police believe Ascencio may have been intentionally struck by a car twice on Route 50 at Fairfax County Pkwy around 10:15 a.m.

Ascencio was crossing Rugby Rd. when she was fatally struck. The car then turned around and hit her again. Ozcan and Ascencio do not appear to know each other.