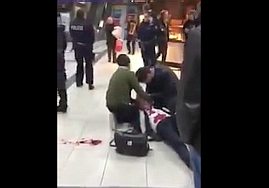 Below are several updates on the situation in Düsseldorf. All translations and summaries are by Egri Nök:

Concerning today’s alleged machete attack, a brief announcement was posted on the Facebook page of the North Rhine-Westphalia Police:

As part of the manhunt, currently, the Kalkumer Forest is being searched with participation of the riot Police

It has been officially revealed that the suspect in custody is from Kosovo. Der Spiegel call him “Fatmir H.” but their article has no new information besides that. He is an asylum applicant — a “refugee”, in other words.

Raw notes from the press conference in Düsseldorf, March 10:

“Nine victims, four of them gravely wounded. it was in an extremely densely-populated train station. The federal police were there very quickly. They chased the attacker until he jumped from a bridge, and was arrested, badly injured.

“The State Prosecutor will soon speak.

“We are thinking of the victims.

“The course of events was typical of what we have seen in other situations. Fortunately there was no large panic, so, if you want, it was a ‘normal’ course of events, sadly.

“Transportation to hospitals and the contacting of the families of victims worked very well.

“There are Italians among the victims.

“The perpetrator lives in Wuppertal. We searched his apartment in Wuppertal last night with a large force; we will comment on that soon.

Now a statement by Federal Police:

“Passengers who immediately witnessed the event alerted two federal police officers who were there anyway, so they were immediately able to chase the attacker. He injured people on platform 13 and 14, came downstairs, ran upstairs again, was chased. Jumped down from the Ellerstraße bridge. Lying on the ground, colleagues from Landes Police arrested him, he was on the ground and immobilized.

“The train station was evacuated.

“According to protocol, at this time Landes Police takes over command of operation. So my statement as Federal Police is over now, I think.”

“We classified the event as amok (rampage).

“Communications went very well, and we evaluated it as an amok situation, but we are still considering a terrorist background. But I can say in this moment there are no clues whatsoever at all of a religious or terrorist background; it is mental illness.”

“By evaluating the CCTV footage we confirmed a single attacker was likely.

“He came in the S28 bound for Mettmann [town/suburb east of Düsseldorf]. When the train arrived in Düsseldorf, upon exiting the train, the attacker chopped at those in front of him also exiting the train, with his axe in their backs. Passengers managed to push him out of the train. We thank the conductor for being quick and closing the train doors. The perpetrator then ran up and down the platform, then ran downstairs, then upstairs again.

“Including the attacker, there are ten injured. Upon arrest, the attacker hinted that he wanted to be killed by police. The four gravely injured suffered skull injuries, but it seems all of them are out of imminent danger.

“We expect other reports of injuries of people who fell down the stairs when fleeing.

“The attacker’s apartment was searched by us [Police] in cooperation with the State Security. We found nothing, absolutely nothing, the only thing we found was a medical certificate that he was suffering from a paranoid disorder, and we found appropriate medication.

“It is normal that in such situation the witnesses think that people who run away are suspects too, but according to our evaluation, it was a single perpetrator.

He is a suspect with migration background, from Kosovo, came in 2009, has got a temporary status (refugee).”

“We think he willingly wanted to kill people because he aimed for their heads and upper bodies. We think we will be able to apply paragraph 126a — as soon as the suspect can be transported, we think he will be taken to a prison hospital.

— Does he have previous convictions?

No criminal convictions. But he appeared at the police in 2015, and we noted he seemed mentally unstable, being a danger to himself.

Between 30 and 50 years old, and one child, 13. Two Italian tourists, women, who stayed in a hotel near the train station. The rest locals. They were on their way home with the commuting train.

— Could you again explain the course of events?

While exiting the S28 he began his attack. Realized he could not get back into S28 again, so went downstairs. Into the main hallway. Then left the train station at Ellerstraße. We are still evaluating CCTV and even YouTube videos.

— Do you know what happened in the train before the attack?

According to witnesses, no prologue; it came completely out of the blue.

— Can you comment on another situation taking place right now in Düsseldorf?

One injured, attacker fleeing, right at this moment, but there appears to be no connection at all.

— Could you repeat how many injured?

Nine victims, at this moment. We classify it as nine attempted murders at this time.

She is among the gravely injured. Four women, five men injured.

— How much time passed between his buying the axe and the brother realizing he was not home at night?

I estimate a week. But when he injured himself, this is the only entry we have on him in our (police) system. No criminal convictions; he injured himself on that occasion, we suspected a mental illness. When he was injured [last night], he hinted that he was ready to die at our hands, we call this “suicide by cop”, but we were able to arrest him.

Definitely, the first people were injured when they exited the SBahn. The first attack happened when exiting the SBahn, and on the platform.

Too early to say, wait for forensics.

No motive found at all. He is an asylum applicant.

— How long did it take between the attack and the police intervening?

I estimate it was 120 seconds until our colleagues started chasing the attacker. They had him immediately in sight while chasing him.

We do not know at this time, hope to reconstruct it via CCTV in the SBahn

We had eyewitness reports that another person ran away, so we had to secure the train station, but our immediate impression was that he was a single perpetrator.

(Second police officer:) And of course we are looking into his mobile phone.

Cooperation among everyone worked incredibly well. These situations are chaotic, but our proceedings were clear, we worked hand in hand.

— His brother lives in Wuppertal?

The perpetrator too lives in Wuppertal.

— You said the conductor closed the doors. Was that automatically, because the train was about to leave?

Normally, as a passenger, you can enter the train again, open the doors again, by pushing the button (next to the train’s door) and the conductor deactivated that.

— (question about large amounts of blood)

There is blood in the entrance of the train, along platform 13, downstairs into the train station’s hallway, very clear to see.

I would like to thank the people of Düsseldorf. There were no hoaxes at all. Not in contacting us, nor on social media, nor on YouTube. No hoaxes were published, we are very pleased with that.

18 thoughts on “Updates on Düsseldorf”