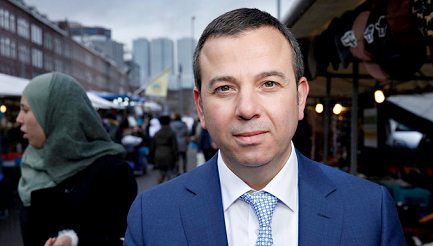 Turan Yazir, a Dutch-born politician of Turkish descent, was until recently a city councilor in Rotterdam. Mr. Yazir was targeted by supporters of Turkish President Recep Tayyip Erdogan in such a way that he was forced to give up his seat on the council a day after the general election on March 15.

Many thanks to Dr. Van Helsing for translating this article from Algemeen Dagblad:

Turan Yazir, a city councillor for the Christian-Democratic Party (CDA) in the city of Rotterdam, gave up his seat last week after a Turkish newspaper named him as one of the instigators of the diplomatic riot between the Netherlands and Turkey.

Increased tensions in the Turkish community in Rotterdam have had such an impact that it is impossible for Yazir to perform his tasks as city councillor properly, said Sven de Langen, the leader of the Rotterdam Christian-Democrats, in a written statement, but ‘Turan has decided to continue his political activities after a period during which his family and relatives will be the focus of his attention’.

Yazir, who is 42 years old, is seen as a Gülen sympathiser, and has been the target of threats and intimidation since the failed coup in July of last year. He is labeled as a ‘traitor’. The Erdogan regime considers the movement headed by the spiritual leader Fethullah Gülen as the mastermind behind the failed but bloody coup.

The Daily Sabah, a mouthpiece for the Turkish government, displays the former councillor by name and with a photo as a politician who hangs out with ‘fascists in the Netherlands’. The Gülenists, among them also former Rotterdam councillors Alaattin Erdal and Muzaffer Cetin (both Christian-Democrats as well) are portrayed next to a portrait of Geert Wilders. They allegedly support the Freedom Party leader because they are against an expansion of Erdogan’s powers.

Yazir, who is married and a father of two, doesn’t want to respond, out of fear of further escalation. ‘I feel singled out,’ said the Rotterdam-born man last fall to this newspaper when his name appeared on a list of Dutch organizations and persons that allegedly have ties with the Gülen ‘terror organization’.

Yazir’s tasks in the faction of three will be temporarily taken over by Christine Eskes. She acted as a stand-in for Danielle Knieriem during recent months, who was absent due to pregnancy but returns today to the council.

8 thoughts on “The Long Arm of Recep Tayyip Erdogan”