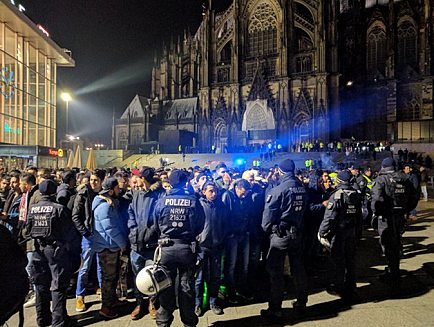 This the third in an occasional series of translations by Egri Nök about the ramifications of New Year’s Eve 2016 (Silvesternacht) in Cologne and other German cities.

The following article was published in Die Welt:

Silvester 2016 had to happen under police protection. But a torturing long year of debates and accusations had barely any effect on those who arranged to meet to commit acts of violence.

Silvester night 2016 was worse than feared. This does not refer to the hundreds of victims of violent excesses at Cologne Cathedral on the last day of 2015; the German police were able to prevent such widespread crime this time.

But what was worse, nonetheless: A tantalizing long year of initial suppression, of debates and mutual political accusation did not have any effect at all on those who arrange to meet for acts of violence on Silvester.

The same procedure [reference to “Dinner for One”] — they really tried it again. While it was possible in 2015 to have doubts that this worrying phenomenon was based on appointment and planning, such speculations are now obsolete. The many young men from Northern Africa, who were screened by the police in the days prior to Silvester, stated point-blank: They wanted to go to Cologne “to party”.

What did they want in Cologne?

After the dismissals by the police, which killed the mood, it can’t be ruled out that the Silvesterlust of all these men would just have come to a boozy Polonaise and a multicultural street party around the Cathedral of Cologne.

But what is more likely is the crushing realization that the mass violence of 2015 was taken quite well by the perpetrators. And why not? As barely any perpetrator had to suffer legal consequences, there was no reason for them to postpone the party in 2016.

The declarations by police and authorities of Cologne sound almost funny, that they were still not quite sure what the roughly 1,500 drunken and aggressive Northern Africans wanted in Cologne. What do you think?

The reaction of the politicians of the “welcome faction” was equally predictable: have the “New fellow citizens” been terribly wronged by the ethnic narrowing of the range of perpetrators by the police?

Strikingly few women on the streets

As always in Germany, the control of the public dialogue was more important than the control of public safety. That Germany would “drastically change” — this proverbial statement by a Green senior politician [Katrin Göring-Eckardt] can be confirmed for Silvester 2016, with a lot of police and strikingly few women on the streets.

This finding does not apply for the friends of the prayer wheel [idiom: repeating the same thing, over and over] such as the head of the Greens, Peter, or the SPD politician Lauer: The crimes in Cologne did not change them at all.

But patience. For Silvester 2017, the fiercely criticized police can verify when they can strike the general suspicion against a certain group of partygoers from their agenda, by issuing no dismissals to Maghrebians, and just letting things take their course.
In other European cities it went far less mildly than in the bulwark Cologne. In Innsbruck and Augsburg, in Den Haag and Malmö, in Hamburg and Zürich, women were sexually assaulted in large numbers, and other citizens were fired at with fireworks, cars were burnt, police attacked — always by the same “clientele”, as they say in vague newspeak.

The scaffolding of a church was burned in Dortmund

In Dortmund roughly 1,000 ill-humoured party guests tried restaging the chaos of Cologne 2015. They clashed with police, and fireworks set the scaffolding of the Reinoldi Church on fire; fire brigades and rescue forces were hampered, and the IS battle cry “Allahu akbar!” was chanted.

Local media interpreted this as celebratory joy about the ceasefire in the Syrian civil war. One might equally say that ruthless customs are beginning to be enforced in Europe, and our “new fellow citizens” ritually test on the first day under the Gregorian Calendar who the public space belongs to.

Meanwhile, even the German Interior Minister does not believe anymore that the downplaying of civil-war-like situations will be enough in the future. Thomas de Maizière’s call for a strengthening of the federal police, for a centralized deportation detention, and for a federation-wide intelligence service is being met with resistance from the states of the federal republic.

Which intelligence service official, which police president of Bremen, would want to hand over territorial jurisdiction? There can be no talk of central deportation detention when the new coalition contract in Berlin already requires the abolition of this governmental instrument of power.

The interior minister’s cries for help

Can a decentralized state protect itself from the inner threat of terror and violence? And, moreover: can the international war against Islamist fighters be fought effectively on the outside across national borders?

At the same time, the interior minister’s cries for help do not seem particularly convincing, when his highest master [Merkel] does not cease to proclaim that borders cannot be protected in these mobile times of ours.

Those who journeyed to Cologne die not behave differently from their convicted Tunisian compatriot Anis Amri. They were highly mobile, had the financial means for travelling, effortlessly crossed national borders, and could rely on their network. And obviously the laws of the host country did not matter to them.

Of course, it is not the same thing to kill numerous people in an attack, as to grope tipsy women and steal their phones and wallets.

Stable safety can no longer be guaranteed

But the reminders by the German interior minister show us that a hardened expert like de Maizière cannot guarantee the stable safety of the citizens without new jurisdictions, be it against Islamist attacks, or against a violent sex mob.

As now it is not just mass murderers, but also disturbing customs from the Islamic world, such as “taharrush jama’i” — the concerted humiliation of women — that press forward right into Europe.

We now know: there is a plan behind this. The Islam expert and scholar of Adorno, Samuel Schirmbeck, describes in his book “The Islamic crusade and the clueless West” how years ago in Northern Africa the secular daily life was stealthily subverted by fundamentalism and violence — and that this brutalization of daily life now threatens the “clueless West”.

This is the essential and crushing insight of the drab European New Year’s celebration under the protectorate of the police.

3 thoughts on “Cologne: The Crushing Insight of Silvester Night 2016”