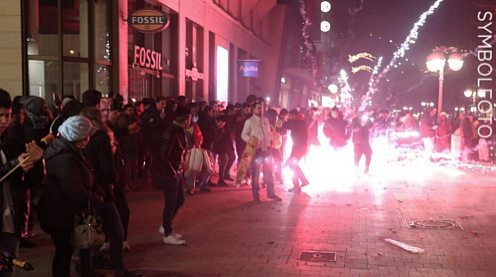 This the third in an occasional series of translations by Nash Montana about the aftermath of what happened on New Year’s Eve 2016 in Cologne and the rest of Germany.

The essay below was published not long after New Year’s at Emma.de, the website of the German feminist Alice Schwarzer:

Alice Schwarzer: Again it can’t be said who the (potential) offenders were. Namely that they were police known “North African repeat offenders”, “Nafris” for short. The preventive measures taken by proactive Cologne police were racist, said Green Party President Peters. But she didn’t waste a single word on the women who were efficiently protected that night.

If it wasn’t so bitterly serious, I could laugh myself to death! There again, unbelievably, another 2,000 or so men of the same provenance tried to create trouble at the main train station in Cologne. And for days so many haven’t even been talking about the truly harrowing and audacious repeat, nor do they talk about the fact that the police prevented worse this time. No, they talk about the use by police during their work of the abbreviation “Nafri” to describe “North African repeat offenders”. Huge outrage. Racism! In short: The deliberate confusion of 2015 is repeating itself.

Exactly a year ago today EMMA was one of the first to report what really happened on Silvester Night. That circa 1,000 men (since then we have learned: it was almost 2,000) of “Arabic and North African descent” were sexually violent towards women. EMMA compared the methods of these men with those at the Cairo Tahrir Plaza. And for that, namely that EMMA dared to utter these words of reality, we were reviled and berated as “racists” by many right up to today.

Back then I wrote that the perpetrators must have made some kind of arrangement and that there was purpose behind their actions. The reactions from the left and left-liberal media: Scorn and ridicule. But in the meantime it’s indisputable that these North Africans planned and colluded to meet at the train station a year ago and again this year (we just don’t exactly know how yet). And FOCUS also reported, “experts assume mastermind behind these groups” at this link.

We can thank the strategies of the new police chief of Cologne that this year was not a repeat of last year. Jürgen Mathies expected these gents and met them with a posse of 1,500 policemen and women (and he felt during the evening that it was necessary to call in another 200 reinforcements). And this time the police intervened preventively before things could happen.

Now was everybody in Germany happy that the horror night of Cologne 2015 wasn’t repeated this time, and have they thanked the police for it? Oh no! The green party chief, Simone Peters, had nothing better to do but to denounce the preventive measures of the police as “racial profiling”, therefore accusing the police of being racially motivated. She found politically correct speech more important than reality: For Peters and for the rest of the usual suspects on the internet, “Nafri” was THE sin of Silvester 2016.

And no less than Jan Böhmermann — famous for his “satire” in which he called the Turkish president not an “Islamist” or “dictator”, but a “goatf***er” — that Jan Böhmermann of all things, felt he had to tweet the following: “What exactly is the difference between a Nafri and a Negro?” To answer in Böhmermann-speak: That the Nafris are (bad language alert) camel f***ers and the negroes are rapists of white women.

But why Cologne? The most Moroccans are in North Rhine-Westphalia are, namely 6,444 Moroccans who have requested asylum (plus a few thousand illegals, more probably). However it should be known by now even in Germany that Morocco, Algeria and Tunisia are not war zones. So why are there North Africans asking for asylum here at all? Because the Green party wants it that way! They are the ones who since May 13th, 2015 have blocked a law according to which the North African states are rated as “safe countries of origin” — and therefore the requests for asylum by citizens from these countries should automatically be denied (except of course of a few qualifying exceptions).

North Africans would then, if the law was no longer blocked by the Green party, be easily deported. At least those with papers. With all others, it’s often the case that their country of origin acts ignorant. Makes sense. They know this kind of clientele of petty criminals and aren’t exactly longing for their return. Of course these uprooted, brutalized, Islamized young men act exactly the same way in their home countries as they do here.

Austria has found a great answer to countries of origin who claim ignorance: It threatens countries with economic sanctions if they don’t want to take back their rejected and delinquent citizens. It’s the kind of language that is internationally understood.

Just for the record: The murderer from Berlin, Anis Amri, also was a known-to-police “North African repeat offender”.

2 thoughts on “Silvester: Ideology Before Reality?”