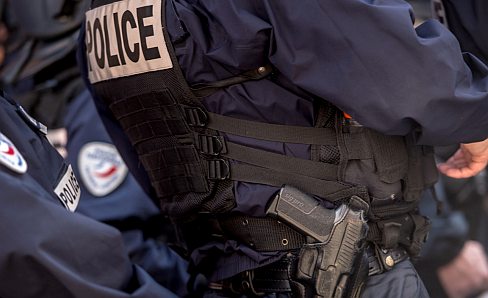 The following news report from the French online video news site BFMTV describes an attack on police in Seine-Saint-Denis, a suburban department northeast of Paris.

What I want to know is, if the police really do carry SIG Sauer Pros, like in the photo, how do they manage to get beaten up by “youths”?

Three police officers were beaten after attempting to carry out identity checks in the lobby of a building in Bobigny on Friday evening, where ten youths were arrested, the sources said. France-Presse (AFP).

Around 8 pm, the police “controlled young people who seemed to be consuming narcotics in the lobby, when they [the police] were beaten,” a source close to the investigation said.

A police officer was seriously injured in the eye. Ten days of total disability (ITT) were granted, pending further examinations. The other two officials, injured in the leg and face, received ten and fifteen days of ITT respectively.

Ten young men aged between 16 and 21 were arrested. Their custody was extended by 24 hours on Saturday night, said the prosecutor. Municipal security has begun an investigation.