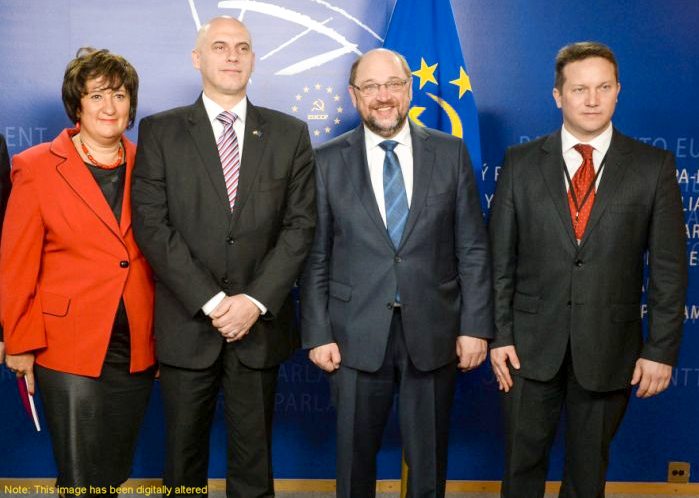 The following essay from the Hungarian daily Magyar Idők discusses the bizarre characteristics of the unnatural entity known as the European Union, and especially those of Martin Schulz, the president of the European Parliament.

CrossWare, who translated the piece for Gates of Vienna, had difficulty finding a direct translation of a particular Hungarian idiom. She said:

In Hungarian we have an expression for a super-bureaucratic office, where no decision is ever made and there is only the pushing of paper from one side to the other. It’s called sóhivatal, a “salt office” — in the Middle Ages that was the expression for bureaucracy and red tape.

I couldn’t come up with anything, either. There seems to be no precise analog in English that isn’t cumbersome. “Paper-pushers” describes the inhabitants of a salt office, and “make-work” describes what they do. Their positions may be “sinecures”. But we Anglophones don’t seem to have a concise, pithy term for the office itself.

The Hungarians have a useful expression in sóhivatal. English loves borrowing foreign words, so I suggest we borrow that one and make it our own idiom. If we can ever learn how to pronounce it, that is.

Martin Schulz is clearly clay-brained. We could prettify him, saying he has too big a coat on, and is undereducated for his position, but it’s best to say it bluntly: The president of the European Parliament has utterly lost common sense.

Otherwise, he would not continue with his arguments — even beyond the transfer of national powers to Brussels — when his salt-office EU has been unable to respond with a single able-bodied decision in its entire existence. He would stop smearing the Orbán government, because the prime minister is fighting tooth and nail to keep our country’s sovereignty, when more and more countries realize that nobody will protect them against the flood of migrants and the inevitably intensified terror threats, if they do not establish their own independent security measures. Schulz would not force the abnormal vision of the United States of Europe, if he were normal.

They say the fish rots from the head. The validity of this saying is demonstrated perfectly by the stupidity — they do not have to go to next door for it — of the representatives of the European Parliament. To provide proof, we collected examples from the magazine Politico to showcase what is keeping the elected ladies and gentlemen busy within the tingling safety of their astonishing salaries, while criminals, rapists and thousands of terrorists have flooded the continent, abusing our feelings of solidarity with the truly needy refugees.

First off, here is the proposal of Catalan Socialist MEP Javi Lopez about reviving the tradition of finch-singing tournaments, which were banned by the wicked Catalan government under pressure from the EU. The finch must first be caught, which contradicts the Catalan aspirations for independence, and the preparation for the competition is not animal cruelty but just the opposite: a convincing demonstration of the integration model, proving that the boringly-repeated basic values of European socialists can be accepted by anyone from finches to jihadists.

While almost half a million migrants slipped out of sight of the authorities, and the terrorists — after committing bloody terror acts — are traveling around Europe as if it they possessed the most modern methods of invisibility, the Italian Angelo Ciocca was asking in his latest speech whether the European Commission is planning to encourage people to establish snail-farms. While he finds it the most profitable business of the future, in the guise of snail saliva which can be applied to the face, he had not even considered that it might offer up new possibilities in the field of law enforcement. Snails pull saliva behind them. Perhaps studying them will give insight into how to track those cheating migrants — who register with a dozen fake identities and become rich on welfare — and make them visible to the authorities.

One representative named Ming Flanagan explained that the Irish have a different concept of time, and the EU definition of time infringes on the rights of Irish citizens. Since there is a theory that the perception of time does not exist, abolishing time would be the only solution which is not discriminatory. And from this lot it is not impossible to expect this.

But not to leave Hungarians out of the list of epoch-making proposals, consider this brilliant idea from Stephen Ujhelyi (Socialist) about traveling circuses. For most of the year our nation’s worthy son questioned the commission about when will it implement uniform regulation among the member states of this branch of art. Because it is discriminatory that in one place the rent for the location is different from another one. It’s just not right!

Of course, it is possible that he has the foresight to think ahead to when the peoples of Europe will sack all the clowns, political illusionists, and public policy acrobats like Schultz and Juncker, when it will be an important issue to calculate how much it will cost to park the company cars of the caravan.

I know that there are many of us who have been looking forward to this moment.