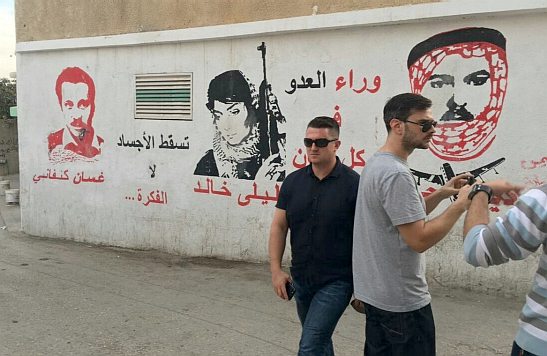 The photo above was taken yesterday by KGS in an unspecified Arab area of Israel. Among the revolutionary jihad icons on the wall behind Tommy is Leila Khaled, a heroine of the Popular Front for the Liberation of Palestine in the 1960s and ’70s.

The PFLP was a Marxist outfit backed by the Soviet Union, so the iconography surrounding it merged Arab nationalist themes with the stylistic elements of traditional Communist propaganda. As I wrote back in 2011, the “Palestina Libre” theme is still perennially popular among socialist revolutionaries, particularly in Latin America.

Here’s another version of the monochrome image of Leila Khaled: 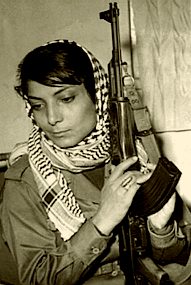 And the image to the right is a copy of the original photo that made her so famous.

I don’t recognize the fellow with the mustache next to Ms. Khaled on that wall. Perhaps someone who is more familiar with the heroes of revolutionary jihad in “Palestine” (or who can read the Arabic caption under his face) will identify him for us.