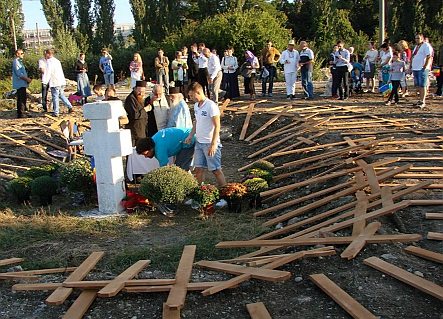 The resistance to the building of a mega-mosque in Bucharest continues. Now the opposition group has started legal action against the proposed mosque.

Many thanks to Stefan cel Mare for translating this article from Alternative News Romania:

We must support him! Catalin Berenghi starts the legal process against the Mega-Mosque

The Mega-Mosque scandal has reached a new level. When last year Catalin Berenghi and Catalin Ioan buried pigs on the land given in Bucharest to the Muslim cult and planted hundreds of crosses in the same place, in protest against such a project, meanwhile they also started a legal action against the construction of the Mega-Mosque. The first hearing will be on October 14, 2016. The Mega-Mosque project, endorsed by Ponta [prime minister] and Iohannis [president of Romania], is defying the religious reality in Bucharest, and is part of Erdogan’s dream of spreading Islam through all of Europe.

What the Ottoman Empire never achieved in all its history, to build a mosque in Romania, is a step closer to being realized in the time of corrupt and irresponsible politicians since 1990. This is why the action of these two is being welcomed, even if for some it can be exaggerated.

We must not forget that, according to the plan, near the Mega-Mosque a Islamic university was to be built with 5,000 places. In other words, the plan was to build in Bucharest the bridge into Eastern Europe for Islam.

Now, with this legal process started and all the instability in Turkey, there will be enough reason to put a stop to the project forever.

We are watching, and we will inform our readers about the evolution of this topic.