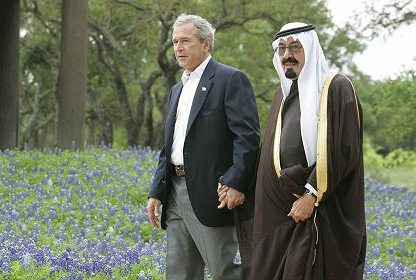 Obama’s ruination of MENA had method after all. And here we thought it was just mendacious madness. Now it turns out that after eight limp-wristed years he has succeeded in dragging home a goodbye gift for the whole world. Just what everyone needs: the soft music of a ticking-bomb crazy state.

BHO makes Bush’s iconic picture, holding hands with the Saudi prince as they walk through the bluebonnets, look positively benign:

Since Obama entered office nearly eight years ago, Iran’s record in advancing its aims has been of uninterrupted success.

In both cases, rather than oppose Iran’s power grabs, the Obama administration has welcomed them. As far as Obama is concerned, Iran is a partner, not an adversary. Since like the US, Iran opposes al Qaeda and ISIS, Obama argues that the US has nothing to fear from the fact that Iranian-controlled Shiite militias are running the US-trained Iraqi military. So too, he has made clear, that the US is content to stand by as the mullahs become the face of Syria.

In Yemen, the US position has been more ambivalent. In late 2014, Houthi rebel forces took over the capital city of Sana’a. In March 2015, the Saudis led a Sunni campaign to overthrow the Houthi government. In a bid to secure Saudi support for the nuclear agreement it was negotiating with the Iranians, the Obama administration agreed to support the Saudi campaign. To this end, the US military has provided intelligence, command and control guidance and armaments to the Saudis.

Iran’s decision to openly assault US targets then amounts to a gamble on Tehran’s part that in the twilight of the Obama administration, the time is ripe to move in for the kill in Yemen. The Iranians are betting that at this point, with just three months to go in the White House, Obama will abandon the Saudis, and so transfer control over Arab oil to Iran. For with the Straits of Hormuz on the one hand, and the Bab al Mandab on the other, Iran will exercise effective control over all maritime oil flows from the Arab world. [my emphasis – D]

It’s not a bad bet for the Iranians, given Obama’s consistent strategy in the Middle East.

Obama has never discussed that strategy. Indeed, he has deliberately concealed it. But to understand the game he has been playing all along, the only thing you need to do listen to his foreign policy soulmate.

According to a New York Times profile published in May, Obama’s deputy national security advisor Ben Rhodes is the president’s alter ego. The two men’s minds have “melded.”

In 2006, then president George W. Bush appointed former secretary of state James Baker and Hamilton to lead the Iraq Study Group. Bush tasked the ISG with offering a new strategy for winning the war in Iraq. The ISG released its report in late 2006.

The ISG’s report contained two basic recommendations. First, it called for the administration to abandon Iraq to the Iranians. The ISG argued that due to Iran’s opposition to al Qaeda, the Iranians would fight al Qaeda for the US.

The report’s second recommendation related to Israel. Baker, Hamilton and their colleagues argued that after turning Iraq over to Iran, the US would have to appease its Sunni allies.

The US, the ISG report argued, should simultaneously placate the Sunnis and convince the Iranians of its sincerity by sticking it to Israel. To this end, the US should pressure Israel to give the Golan Heights to Syria and give Judea and Samaria to the PLO.

Bush rejected the ISG report. Instead he opted to win the war in Iraq by adopting the surge counterinsurgency strategy.

But once Bush was gone, and Rhodes’ intellectual twin replaced him, the ISG recommendations became the unstated US strategy in the Middle East.

Caroline Glick sees clearly. This is the sad burden of a prophet.

Read the rest to understand more fully one aspect of the scope of Obama’s treasonous actions in the Middle East.

For this one, thank Valerie Jarrett and Ben Rhodes. If you smell sulfur, thank Lucifer.

7 thoughts on “Bush on the Primrose Path”