In his latest essay, Emmet Scott posits that Islam arose as a result of the Arab usurpation of the Sassanid Empire in the middle of the 7th century A.D. 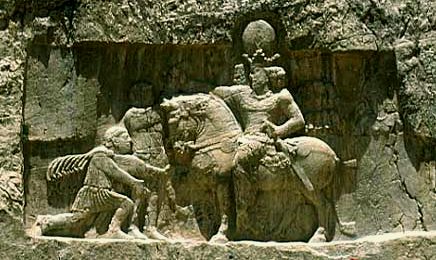 In my Impact of Islam (2014) and Guide to the Phantom Dark Age (2014) I argued in some detail that Muhammad was a fictitious character conjured to life by the Umayyad Caliphs in the late seventh century in order to justify and legitimize the Arab usurpation of the Persian Sassanid Empire. In the above studies I also suggested that the earliest “Islam” was spread by the Sassanid Empire and that the great “Arab Conquests” of Anatolia, Syria and Egypt were in reality carried out by Persian armies. Certainly the earliest Islam detected by archaeologists is thoroughly Persian in character in terms of art, architecture, iconography, and even pottery. Thus for example, the crescent moon with the star, Islam’s symbol par excellence, is in fact an Iranian religious motif and appears on Persian coins many centuries before the advent of Islam.

In the above two volumes I also argued that the Sassanid king Chosroes II (reigned 590-628) converted to the Ebionite (or Judaic) form of Christianity (or, more accurately, Judaic Jesus movement) and that Ebionitism, popular throughout the Middle East since the fourth century, formed the doctrinal bedrock of what later came to be known as Islam. I suggested too that the Qur’an was originally an Ebionite devotional text written in Aramaic, and that it was only under the Umayyad Caliphs (beginning with Mu’awiya) that the book was transcribed into Arabic — a transcription which changed the meaning of many passages.

The Ebionite cult was doctrinally almost identical to Islam; it accepted the Mosaic Code, with all it implied (circumcision, halal/kosher food, divorce, stoning for adultery, etc.), yet also saw Jesus as a prophet — though not the Son of God. That Chosroes II converted to Ebionitism is suggested by a number of clues. First and foremost, he is known to have converted to some form of Christianity (usually described as “Syriac”) after his marriage to the beautiful Syrian princess Shirin, who was also a Christian of some variety. Secondly, and crucially, he began to issue coins bearing the Aramaic legend bism Allah, “in the name of God.” These coins are regarded as the earliest Islamic coins and are usually believed to have been issued by one of the conquering Rashidun caliphs, either Umar or Uthman. Yet the same coins have the image of Chosroes II and his name in Pahlavi script, as well as a Zoroastrian fire temple on the reverse side. It is inconceivable that any Islamic ruler — (in our modern understanding of Islamic) would have issued coins of this design. Yet in spite of that the coins are routinely ascribed to Arab caliphs, for the simple reason that to assign them to the man whose name appears on them — Chosroes II — would mean placing a question mark on the whole of early Islamic history. And that is something historians have as yet been unwilling to do.

We know that a decade or so after Chosroes’ death the throne was occupied by Yazdegerd III, his grandson. Yazdegerd was the last Sassanid Emperor and we are told that in his time Persia was conquered by the armies of Caliph Umar. Yet Yazdegerd’s coins also display the legend bism Allah, as well as the Zoroastrian fire temple. Now it may just be conceivable that the Arabs could have for convenience continued to use the basic design of coins minted by the last Sassanid emperor, Yazdegerd III, but why continue to mint coins with the name of an earlier Persian king, Chosroes II, one who moreover had died a decade and a half earlier?

Caliph Umar, the reputed Arab conqueror of Persia, was said to have been assassinated by a Persian captive/slave named Piruz Nahavandi sometime around 645. Interestingly, the assassin, though regarded as a villain by Sunni Muslims, is seen as something of a hero, or even saint, by Shias, who report a tradition that he was miraculously saved from retribution and transported to Kashan in Persia, where he lived out his days amongst the adherents of Ali. The tomb of Nahavandi is still a center of pilgrimage for Shia Muslims.

And this brings us to a crucial point: The Rashidun, or “Rightly-Guided” Caliphs, the first three caliphs who are said to have conquered much of the Byzantine and Persian lands, are not honoured by the Shias of Persia, but are regarded as usurpers and impostors. Only Ali, the son-in-law and cousin of Muhammad and last of the Rashidun, is regarded as a legitimate commander of the faithful. In Shia belief, only Ali was legitimate, since he was of the bloodline of the Prophet.

Ali himself was assassinated by a Kharijite during a war of succession against Mu’awiya, supposedly in 661. Now it so happens that Mu’awiya is the first Islamic ruler to bequeath to us artefacts bearing his name: Neither Muhammad himself nor any of the “Rightly-Guided” Caliphs who came after him has left so much as a brick or inscription to mark his existence. This is an extraordinary state of affairs, for we are told that by the time of Ali’s death the lands of the Caliphate stretched from the borders of India in the east to Carthage in the west. For forty years then the Islamic world, a large and expanding empire, had been ruled by Caliphs who failed to leave a single artefact attesting to their existence. This is a situation unique to the early Islamic world, and must make us wonder whether any of the aforementioned characters actually existed.

Examination of the Qur’an, as Christof Luxenberg and others have shown, would suggest that the answer to the latter question would be “no.” As Luxenberg pointed out (The Syro-Aramaic Reading of the Koran, 2007), up to one third of the Qur’an makes no sense when read as an Arabic text. However, read as an Aramaic text, the whole book makes perfect sense, and reveals itself to be a devotional text belonging to some form of Christian sect. Jesus (Isa) appears twenty-five times in the Qur’an whereas Muhammad appears only four times. The name “Muhammad” implies “chosen one” or “praised one” in Aramaic (and Arabic) and the coins of Mu’awiya, which show a man holding a cross along with the name MHMT (Muhammad) would suggest that “Muhammad” was originally a title for Jesus. This is an opinion rapidly gaining ground amongst historians and lexicographers. At least three of the occurrences of the name “Muhammad” in the Qur’an could easily be interpreted as referring to Jesus, and even the fourth could conceivably be viewed in the same light.

Aside from Jesus and his mother Mary (Maryam) virtually all of the characters encountered in the Qur’an belong to the Old Testament, indicating a profoundly Jewish background to the text. Moses, for example, is mentioned 136 times, and more to the point, Jesus is identified as the nephew of Moses. This would suggest that the Qur’an’s Jesus (Hebrew Yehoshua) has been confused with the Old Testament Joshua (also Yehoshua in Hebrew), who was indeed from the next generation after Moses. Now whereas Jesus of the New Testament was more or less a complete pacifist, Joshua of the Old Testament was a war leader, and quite a brutal one at that. Could it be that the Jesus (Isa) of the Qur’an owes more to Joshua than to Jesus? In any event, if Muhammad was originally an honorary title for Jesus, this means that no historical character named Muhammad ever existed and the whole story of Islam’s origins and early development is a myth.

All of which brings us back to the first Umayyad Caliph Mu’awiya. With the latter ruler a process of Arabization began, and it is an extraordinary coincidence, if coincidence it is, that the first archaeological traces of an Arab Islamic civilization (as opposed to a Persian Islamic civilization) are found precisely in the reign of Mu’awiya, the man whose life marks the great divide between Arab Sunni and Persian Shia Islam. I would suggest then that Mu’awiya was an Arab general in the employ of the Sassanid Empire, who staged a coup d’état against his Persian masters and seized the Sassanid throne. It is known that huge numbers of Arab troops, along with entire Arab tribes and peoples, such as the Lakhmids, were affiliated to the Sassanids and formed an important part of Sassanid armies. Interestingly, the Lakhmids, whose territory included a large part of south-west Iraq and north-east Saudi Arabia, are known to have converted to some form of Christianity, usually described as Nestorian, in the sixth century. With the murder of Chosroes II in 628 the Sassanid Empire was rent by civil war, with rival factions vying for control of the state for over a decade. In the midst of this turbulent period, I suggest, Arab generals played a prominent role, initially installing kings on the throne and finally, under the leadership of Mu’awiya, seizing the throne itself. We should note that barbarian troops and generals behaved in the same way in the latter centuries of the Roman Empire. The Arabs, long minor partners in the Sassanid Empire, now found themselves in control, and they had no intention of letting it slip. A process of Arabization began: The Qur’an, previously known to all as an Aramaic document, was now transcribed into Arabic, and to complete the process “Muhammad,” previously a title of Jesus, was now transformed into a conquering Arab prophet, who emerged from the deserts of Arabia at the head of victorious armies. Arab generals, who had taken part in the wars for the Sassanid throne following the murder of Chosroes II, were transformed into conquering caliphs, and a story was concocted telling how these men subdued the mighty Sassanid state.

By the late seventh and early eighth centuries a veritable industry grew up producing hadiths which purported to describe incidents in the life of the newly-invented Prophet Muhammad, hadiths which often contradicted some parts of the Qur’an itself and which explained the contradictions by the expedient of “abrogation”. In short, the Prophet had changed his mind about this or that, following a new revelation from God, and cancelled his earlier teaching.

But the peoples of Iran could not be completely taken in by this process. They well knew that the Arabs were usurpers, and whilst they accepted that “Muhammad” was indeed a prophet who spoke a Semitic language (i.e. Jesus), they denied the legitimacy of the men who wrought such havoc in the Persian homeland following the death of Chosroes II, men such as Abu Bakr, Umar and Uthman. Only Ali was accepted as a genuine leader because “Ali” too (the “high” or “elevated one”), as Volker Popp has noted, was another honorary title for Jesus. (See Popp, “The Early History of Islam” in Karl Heinz Ohlig and Gerd. R Puin eds. The Hidden Origins of Islam)

Emmet Scott is the author of Mohammed and Charlemagne Revisited: The History of a Controversy.

Previously: The Myth of the Primeval Matriarchy