Emmet Scott is already well-known to many Gates of Vienna readers as the author of Mohammed and Charlemagne Revisited: The History of a Controversy

. In the following essay, Mr. Scott examines the evidence against the ancient Golden Age of Matriarchy so beloved of modern feminists.

This piece appeared earlier at the New English Review in a slightly different form. 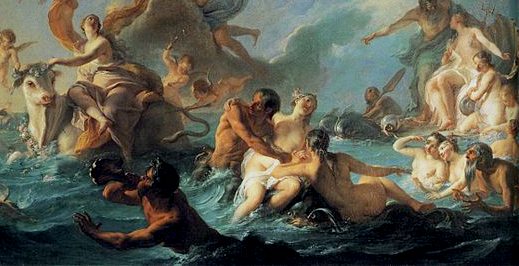 The Myth of the Primeval Matriarchy

Origin myths are of tremendous psychological importance; in many respects they inform our attitude to the world, to life and to the future. That is why Darwinism, which may be regarded as the first materialist creation-myth, was of such fundamental importance. It would be no exaggeration to say that in many respects the twentieth century was a creation of Charles Darwin. Certainly the decline and even death of Christianity in Europe owes very much to his epoch-making Origin of Species.

But the crude battle for survival envisaged by Darwin could hardly be considered emotionally appealing, with the result that other alternatives to Christianity were sought out. One of the most important of these and, I would argue, one of the most damaging, was that of the Primeval Matriarchy: the notion that at some early stage in human development the world, or at least most societies, were dominated by women, and that these early societies were characterized by pacifist co-operation and peaceful co-existence. The myth has several variants and several sources of inspiration, but it is an idea which is utterly without foundation and has caused no end of mischief in contemporary Western society.

The concept of a primeval matriarchy may be regarded, on one level, as a modern incarnation of the Golden Age myth, a belief found in primitive societies throughout the world that during the infancy of the human race mankind lived in perfect peace and harmony in a world of abundance. The Garden of Eden is the biblical take on the legend. In the Bible story however, as in all traditional accounts, there was a “Fall” from grace, after which strife and hardship entered the world. The Fall, or Original Sin, represented an implicit acceptance of human imperfection and in a way accounted for the violence and discord of life by pointing the finger of blame at humanity as a whole and the individual in particular. The essential imperfection of human nature was recognized by all ancient societies, and is a theme which we encounter in the works of the Chinese philosophers as well as those of India and Greece. With Rousseau and the Enlightenment, however, there came a change. Reacting against the rationalism and industrialization of the eighteenth century, Rousseau and his fellow proto-romantics adopted a sentimentalized view of ancient and primitive man, arguing that human nature, in its pristine form, was not “fallen” at all, and that human beings had in modern times been corrupted by an exploitative and degenerate economic system. 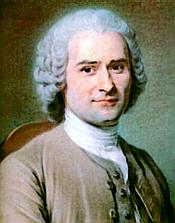 Rousseau’s Noble Savage has caused untold harm over the past two centuries as totalitarians of various hues sought to foster and free the inherent nobility of humanity by destroying the corrupt and exploitative economic systems which had supposedly turned people into butchers and criminals. Both fascism and communism trace a direct line of descent to Rousseau, as do anarchism and the various extremist ecology movements of our time.

Feminism, too, is a branch of Rousseau’s tree, though it has other wellsprings. Marx and Freud, of course, with their negative attitudes to Christianity and Christian civilization in general, contributed much to feminism. Marx in particular emphasized how “bourgeois” Christian society had oppressed women, and called for the abolition of the family and complete sexual liberation. Freud contributed by his claim that neuroses and mental illness in general were the result of sexual repression. But the myth of a primeval matriarchy also owed much to students of mythology such as James Frazer and (more especially) Robert Graves. Archaeology too played its part, as scholars began to uncover ancient images of goddesses and female deities from various parts of the globe. The Palaeolithic epoch, the earliest age of homo sapiens, revealed small statuettes of clay, ivory and bone, depicting some form of Mother Goddess. Perhaps the most influential archaeological discoveries, however, came from Crete, where between 1900 and 1905 Sir Arthur Evans uncovered a splendid pre-Greek civilization where women and female deities apparently enjoyed a privileged position. 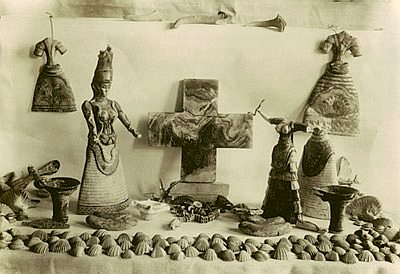 In many ways, “Minoan” Crete seemed like a Freudian paradise. Here the archaeologists unearthed colourful frescoes of naked-breasted women participating in the dangerous “bull-vaulting” game, whilst statuettes of bare-breasted goddesses, holding writhing snakes in each hand, emerged from various parts of the island. Evans spoke glowingly of a pacifist matriarchy that flourished before the coming of the warlike and patriarchal Greeks, and his vision was hugely influential in academic circles for at least half a century. It is a vision which has been humorously outlined by Rebecca Bradley on the dust-cover of her book, Goodbye, Mother: The Warriors of Crete: “Once upon a time, on an olive-strewn island in a wine-dark sea, beautiful people lived in peace under the rule of the Great Goddess and her matriarchal avatars. The like of their palaces was not seen again until the advent of shopping-mall architecture in the twentieth century; their artistry flowered like the saffron blossoms collected by their luscious bare-breasted maidens. This was Minoan Crete, stronghold of the Matriarchy and the Great Goddess, flower child of the ancient world — until those nasty patriarchal Mycenaeans and even nastier Dorians came along and crashed the party. Oh yes, and there’s something about a volcano on Santorini, and a few earthquakes as well, but the rot really set in when the men from the mainland took over.”

Perhaps the most prominent high priestess of the Great Goddess was Lithuanian archaeologist Marija Gimbutas (1921-1994). During the 1950s and 60s Gimbutas developed her so-called “Kurgan Thesis;” basically the idea that the archaeological marker of the arrival in Europe of Indo-European-speakers was to be found in the Bronze Age Kurgan mound burials of the Pontic Steppe, a vast region incorporating most of present-day Ukraine, southern Russia and northern Kazakhstan. Controversially, Gimbutas further claimed that these nomadic Indo-Europeans brought with them a warrior-culture dominated by male sky-gods, which supplanted earlier matriarchal and goddess-worshipping cultures. In this, she echoed ideas already expressed at great length by Robert Graves in his 1948 book The White Goddess. Over the next three decades Gimbutas developed her ideas further in a series of books, articles and lectures delivered at campuses throughout America and Europe, where she was immensely influential amongst the burgeoning women’s movement. Three major works, The Goddesses and Gods of Old Europe (1974), The Language of the Goddess (1989), and The Civilization of the Goddess (1991), presented an overview of her conclusions regarding what she saw as Europe’s primeval matriarchy.

The importance of Gimbutas in the development of the matriarchal myth, and also by extension in the development of modern radical feminism, cannot be overstated. Her archaeological experience and expertise, together with her wide knowledge of linguistics and anthropology, seemed to give academic credibility to the romantic and poetic ramblings of Arthur Evans and Robert Graves. Yet in retrospect it is hard to imagine why anyone with even a modicum of common sense could have been taken in. 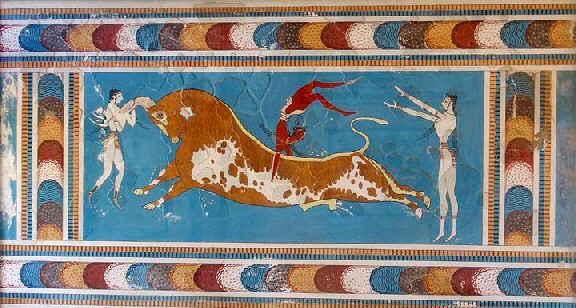 There were warning signals everywhere. Right from the beginning, for example, many historians were critical of Evans’ interpretation of Minoan Crete, and a devastating blow was delivered in 1974 when German author Hans Georg Wunderlich published his Wohin der Stier Europa trug? (Where did the Bull carry Europa? published in English in 1975 as The Secret of Crete). Here Wunderlich, a trained geologist, examined the structure of the “palace” of Knossos in Crete in detail and came to the conclusion that the building could never have been a palace for the living. It was, instead, a charnel house, a massive necropolis which doubled as an arena for human sacrifice. For the happy-go-lucky “bull vaulting game”, said Wunderlich, was nothing of the sort: it was a ferocious form of human sacrifice which involved young men and women being gored and trampled to death by a sacred bull. This, said Wunderlich, was the origin of the legend of the Minotaur. Since Wunderlich’s time human sacrifice has been confirmed as an integral part of Cretan religious practice, whilst the supposed “pacifism” which Evans and others had imagined, was exposed as nonsensical.

And so it has proved in region after region. Neolithic Europe, for example, which Gimbutas tried to portray as some form of matriarchal utopia, has been shown to have been just as warlike as later epochs of European history. The most prized possessions found in Neolithic burials are invariably weapons of war, such as bows, spears, axes and maces.

Indeed, throughout the planet, it has emerged that in the earliest epochs of culture and civilization war was universal and human sacrifice widespread (if not also universal). Modern “Druids” and Neo-Pagans, strongly influenced by the Matriarchy myth, have rejected Christianity in its entirety, and every solstice sees historic sites such as Stonehenge besieged by thousands of Wicca and Druid practitioners colourfully garbed in flowing vestments and jewels. But the tree-hugging, touchy-feely, feminist religion of the Neo-Pagans bears no relationships whatsoever to the actual religion of Europe’s Celtic and Germanic ancestors. In fact, notwithstanding the occurrence of the odd unusual character such as Boudicca, both the latter peoples were warlike in the extreme and practiced human sacrifice on a grand scale. Nor were women considered even remotely equal to men, and all the evidence suggests that a husband or father had the power of life and death over all the female members of his household. Homosexuality too, as Tacitus informs us, was a criminal offence punishable by a horrific death.

Contemporary tribal societies display the same essential characteristics, and nowhere has any evidence emerged of a genuine matriarchy as imagined by Gimbutas and the feminists. In the early twentieth century, for example, the cannibal tribes of central Africa threw their old people, both men and women, to the crocodiles, as soon as they became infirm and a burden to the community, whilst the tribal peoples of South America (like those of Africa) grant the power of life and death to a husband over his wives and daughters. Belief in sorcery was universal, and an outbreak of illness or any other kind of misfortune invariably attributed to the malignant influence of a witch — very often a young woman — who would be identified thanks to the skills of a witch-doctor (now called a ‘shaman’) and put to death. I vividly recall the content of a lecture delivered by Dr Andrew Saunders of Cardiff, who had during the 1970s spent a year living with the Yanomamo people of the Orinoco basin in South America. Shortly after his arrival in the village, Dr Saunders was seated round the camp fire with the other men of the tribe, sniffing an extract of the narcotic cocaine plant. One of the tribesmen began to shout at a woman who walked past the camp fire several times. Dr Saunders was informed that the woman was the man’s wife and he was telling her to get the dinner ready. A few minutes later, after another bout of shouting, the man got up, reached for a machete, and hacked the woman to death in front of the camp fire. Understandably, the Doctor was shocked and horrified by this unprovoked and utterly unexpected violence. But even more shocking was the reaction of the other men at the camp fire: They took no notice whatsoever, and continued chatting and joking as before. It was as if the murderer had squashed a bug!

How long will it take to convince the feminist goddess-worshippers and neo-pagans that modern Western society is the most female-friendly civilization that has ever existed? And when will they cease their attempts to subvert that civilization in the name of a feminist-shamanist utopia that never existed?

40 thoughts on “Emmet Scott: The Myth of the Primeval Matriarchy”