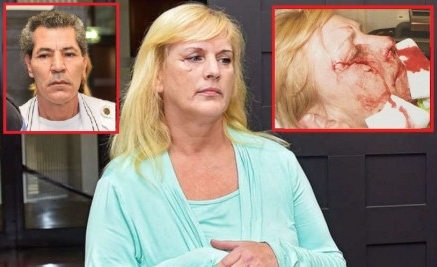 The following article tells the sad story of a middle-aged German woman who fell for the blandishments of a sweet-talking Arab man who longed to gain permanent entry to the German welfare state. She married him, and… Well, you can guess the rest.

Many thanks to Nash Montana for translating this piece from Politically Incorrect:

After a brutal attack — a courageous judge

This will finally have consequences. A phony Tunisian asylum seeker wanted to gouge out his naïve German wife’s eyes and injured her severely. For this, the Bautzen circuit court judge sentenced him to four years in prison. And he expressed this very clearly: after this despicable offender has served his prison sentence he should leave “our country” for ever.

On August 16th, 2016, different media outlets reported about an incident taken right out of the pages of the asylum seeker picture book of horror. The blonde German Marion Z. (photo, 55 years old, nurse, widowed, probably still having dreams of her fairy tale and multiculturally well-bred Prince Charming) from the town of Radeberg in Saxony experiences a second spring and falls in love empty-head-over-heels in the year 2014 “at a dance evening in Dresden” with the two-years-younger asylum seeker named Kamel K. (small photo, devout Muslim, no residence perspective), a man with the looks and the appearance of a steroid-butch whorehouse proprietor. He seems to recognize in Marion his ticket to entry into the German welfare state.

He lies about — how often have we heard the same thing before! — his ‘great undying love’. He lets her get him a job at the DRK [German Red Cross]. Everything went quite well. Then before he could marry the emotionally crippled multiculturally-enriched German woman, he was deported to Tunisia. Therefore they immediately got married in an Arab country in the spring of 2015. Apparently the people in their respective offices in that country were either too lazy or too cowardly to suspect foul play and a bogus marriage, so an appropriate test was not administered. The free pass had been issued: because according to Article 6, Paragraph 1 of the Constitution it is allowed that a marriage with a German citizen can be lived in Germany; a visa has to be issued, benefits have to be paid.

Therefore by July of 2015 the man could come back and live under the cornucopia of the welfare and benefits state. Right after their return, everything changed for the naive German. Are we surprised? “After the wedding he suddenly was a different man.” “I wasn’t allowed to smile at other men, he accused me of cheating on him, he called me a filthy slut,” the surprised Marion recounts with utter incomprehension. “He became more and more jealous and he accused me of having affairs with other men.” At their common employer, the DRK, where he in the meantime had become a “translator” for refugees, his behavior also turned strange. “He accepted no more women, not even our female boss. He constantly monitored me.” After a few months of tactics of Muslim oppression and private Islamic terror, in November of 2015 Madam Z. threw the “charming foreigner” whom she had married in a love-crazed moment out of the apartment in a lucid interval.

Those who are familiar with the Muslim Arab mentality will not be surprised that Kamel K. became gallantly angry after these bold assertions by his wife. An unworthy broad, such an incomplete, semi-human couldn’t treat him like any German boy! (Sura 4:34 does not even have to be cited here.) He began to ambush her. “He threatened me with his fists, he spat in my face,” the Radeberg woman reports. But why she didn’t go to the authorities, and why Kamel hadn’t been already put on a plane back to the desert, only the gods in Berlin know.

What we do know is that on January 23, 2016 he could calmly call Marion Z. and vigorously threaten her: “I will gouge your eyes out so that you can’t look at another man, and no other man will want to look at you!” This Arab declaration of love was understood by the now-courageous Marion. She reported him to the police and filed for divorce. And again nobody did anything. Kamel K. threatened again, red with anger: “I will take revenge.” On the evening of April 3rd he lay in wait for Marion at the train station in Radeberg on her way to work; he tried to gouge her eyes out with a fruit knife. It was Marion’s luck that our skilled laborer from the orient was too clumsy, so that instead she ended up with a split nasal wing. An emergency operation saved her.

There was no charge for attempted murder or manslaughter (then the district court would have taken the case). Instead it became a case of “severe bodily injury”, which could only be penalized — on probation — with six months. Obviously the frightened prosecution had too big a respect for the immigrant, who in the meantime had brought hundreds of thousands of Muslim friends and already had experienced the blessing of the grand Muslim mother A. M. [Merkel]. Kamel K. confidently and in domineering fashion claimed during the trial that he only wanted to scare the German woman. That he didn’t see any blood after the “deed”. “My wife lies.” In his lamentations he relished: “She only married me because of the money.” And he complained: “In Germany the laws are made only for women.”

The humane failure of Marion Z. and the failure of the German authorities (federal foreign office, foreigners’ registration office, police, prosecution) was not continued by the judge, Dr. Dirk Hertle, at the circuit court. He immediately took this crime for what it was: The bestial offense of a “lost” Arab. He imposed the maximum possible penalty of four years. And he added in clear words: “You terrorized this woman. Your jealous Arab macho attitude has driven you to your crime. That has nothing to do with honor, you walked away in a cowardly fashion, left your bleeding wife on the ground. I hope that you will leave our country after your sentence — forever.” Our country needs such judges desperately now more than ever. Such words should be heard in every courtroom to finally stop the stupidity of the German authorities who are being kept on strings by the furious freeloading cliques of the established media and politicians. But we all know what will now have to happen to judge Hertle. This kind of courage has to be punished by the establishment.

One may assume: Kamel K. will either be punished with a year and a half on probation in his appeal, or he will be released again after a year for reasons of prison overcrowding, “good behavior”, or “traumatic experience during flight and persecution”. The politically-controlled constitutional state knows many ways and tricks so that nobody who really deserves it receives a fair punishment — especially not culturally sensitive Muslims. And then K. will probably, with the help of another blue-eyed German woman, enrich the country until the end of his days. The scars on Marion Z.’s face will remain forever. May they be a warning for the sacrificial lamb and for all who are or want to become refugees’ sweethearts.

40 thoughts on “The Jihad Gigolo”