The following analysis by H. Numan is an extension of his earlier report on the recent terror attacks on tourist resorts in Thailand. 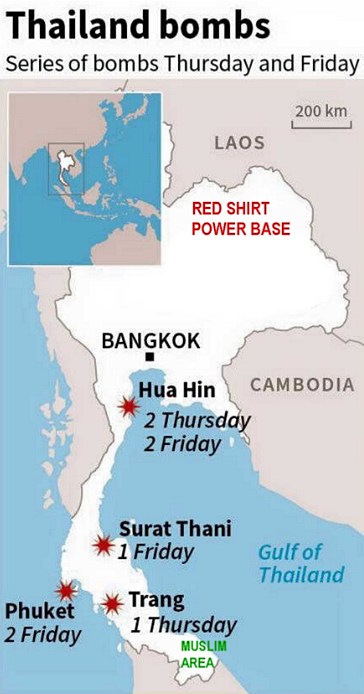 Last Friday Thailand was rudely awoken by a series of bombs and arson attacks. Nobody knows — as yet — who is behind it. The military government thinks the red shirts are behind it. Just about everybody else doesn’t. Most people tend to look to the deep south of Thailand and think the southern insurgents are behind it. So do I. The attacks are typical for southern insurgents: small explosive devices, arson, motorbikes rigged with explosives and no public claim of responsibility. The police recovered parts of the mobile telephones used to detonate the bombs, and they are all Samsung Hero mobiles bought in Malaysia. The only thing that is odd is that the attacks happened outside their normal area of operation in the deep south.

At the top we see a rift appearing between the police and the army. Officially the police lead the investigation, but in reality the army does. The police are far from happy, and made several statements indicating they are furious. One police general went as far as to say that he has considered turning over the whole case to the military and letting them figure it out.

Since 2014 we have had a military government, and one of the first things the generals did was to grant the army a lot of special privileges. For example, they can arrest people, try them in a military court, and keep them for interrogation for seven days without a warrant and without informing the civil authorities (=the police). Which is exactly what they are happily doing right now. Yesterday a bunch of red shirt leaders were arrested, seventeen altogether. All of them are over 50 years old, nine of them between 60 and 70. The army doesn’t have to say where they are incarcerated, and they don’t. This announcement came as a rude surprise to the police.

Before that, the local police in the south asked for an arrest warrant, got it, and wanted to arrest a man working on an oil rig in the Gulf of Thailand. Sure, no problem, said the local army commander. Bring a few cops, we’ll fly you in. The police made the arrest, the chopper flew back, but … landed at an army base, where the military took the man into their custody. Not surprisingly, the police were a bit miffed about that. To rub salt(peter) into the wound, the military announced after the police publicly said they weren’t happy: “We wouldn’t have arrested this chap if the police hadn’t asked for his arrest. Once they arrested him, we merely took over. Why the sad faces? We only follow orders from civil authorities.”

This is Thailand, and not the West. So forget any notions you have about an impartial military just doing their patriotic duty. Or police selfishly protecting the people from evil. Both have their own agendas. For example, the army owns national radio and TV stations, a bank (TMB or Thai Military Bank) and a lot more. So do the police. The military tends to be more involved in legitimate businesses and real estate, the police in less lubricious affairs. Hence they have a much more negative reputation.

I fully understand the military’s point of view. If they admit the southern insurgents are behind it, they’re admitting they can’t handle the problem at all and haven’t done anything useful the last fifteen years. There isn’t a revolt down south, because the army completely ignores any insurgent movement at all. There is just unrest created by people.

Another point to ponder is that the red shirts are temporarily finished as an important political force, but that doesn’t say anything at all. The army is looking into the near future and wants the red shirts to be powerless then as well. So what better way to solve your nasty little southern problem and get rid of that other nasty little red shirt problem at the same time? The red shirts aren’t involved? Who cares?

Being utterly ignored, according to academia, might very well be the reason behind the attacks. The acadhimmia of Thailand think the southern insurgents are behind it, and want to force the army to acknowledge their existence by doing something. They suspect the BNR-C group is behind it, as they are the only group capable of that kind of widespread action currently. I write “acadhimmia”, because what they basically say is ‘let the government acknowledge them, quickly surrender, and be over and done with. The poor oppressed southern muslims cannot be blamed as they are the real victims.’ The usual ivory tower stuff and political blah-blah we hear far too often in those circles. I’m a bit surprised to see the intellectual rot infiltrated here as well. Intellectuals in Thailand are usually much more conservative in their opinions.

At the moment we’re playing Cluedo in Thai. We know it wasn’t Mrs. Nokyung (Peacock) with poison, it wasn’t colonel Masstart (Mustard) with a candlestick in the kitchen. There is a very strong suspicion the southern insurgents have done it, and that suspicion is growing.

That could mean a lot of trouble in the future. Thailand is 94% Buddhist, 4% mohammedan, 1% Christian and 1% something else. Almost all of those mohammedans live in the three southern most border provinces, and in a few areas in Bangkok. Nowhere else. If they start targeting outside their normal areas of operation and specifically on tourism, we’re in for some fun. Just image what Europe and America can expect: both have much higher percentages of mohammedans within their national borders.