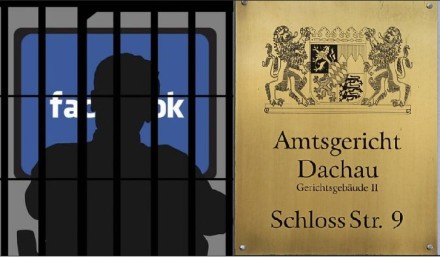 Vierkirchen is a municipality in the district of Dachau, in Bavaria north of Munich. A Vierkirchen man and his were recently tried and convicted for creating an immigration-critical group on Facebook.

Many thanks to Nash Montana for translating this article from Der Münchner Merkur:

Vierkirchen — A Vierkirchen couple was brought before the district court in Dachau, accused of sedition. The husband had created a group that was hostile towards refugees.

Due to the supposed anonymity of the Internet, the number of rightwing radical messages is increasing. But a married couple from Vierkirchen had to find out that there is no guaranteed anonymity. About a year ago, Peter M., 27, created a Facebook group called “Anti-Refugee Movement”. Since he and his wife, Melanie M., 26, are the administrators of the group, they had to stand trial in court on a charge of sedition.

M.’s description of the group was: “The war and economic refugees are swarming our country. They bring terror, fear, suffering. They rape our women and put our children in danger. It has to be stopped.” He added a picture of the German flag — and just like that, the creation of a radical rightwing group was finished, so says Judge Lukas Neubeck.

The group grew astoundingly fast: In only two months, it gained 900 members. One Facebook user, however, whose disposition was in direct opposition to that of M., stumbled over the group and reported it to the administration of the social network. They checked the group — and found it to be indiscriminate.

Therefore the Facebook user went to a police station in Lübeck. They discovered that the group was created on a PC from Vierkirchen. So they forwarded the case to the Kripo [Criminal Police] in Fürstenfeldbruck [adjacent district].

The couple came without their lawyer; she had — according to Judge Lukas Neubeck — waived her mandate just before the main trial. They brought their ten-month-old son, who sat on his mother’s lap during the trial.

“One can’t even say anything critical at all on the topic of refugees without immediately being branded a Nazi. I just wanted to create a forum for discussion where people could voice their opinions about the refugees. I never gave it much thought as to the exact phrasing; I didn’t mean it like that,” the accused tried to justify himself.

M. kept asserting that he checked out all members of the group and that he had repeatedly suggested in his posts that he didn’t want to read any radical right-wing utterances — but he couldn’t prove it; the group has been deleted in the meantime.

After repeated inquiry by Judge Neubeck, M. then said at some point that he doesn’t actually have anything to do with refugees, and that he distances himself. That the only thing that bothers him is “the actions of the chancellor”. M. used the male ‘Kanzler’, instead of female ‘Kanzlerin’ in front of the judge, at which point Neubeck indicated to him that Germany has a female chancellor and not a male chancellor. “Furthermore, you are not exactly distancing yourself from refugees with this group. The description of the group is a stringing-together of pure generalizations, with a very clear radical right-wing background.”

M. was sentenced to nine months prison, suspended, and his wife was sentenced to a monetary fine of 120 daily rates at €10. Judge Neubeck: “I hope that you understand the seriousness of the situation. If I find you here again at this bench, you will land in prison.”

23 thoughts on “Criticizing Immigration is a Criminal Offense in Bavaria”