MC sends this brief note about one particular example of the propaganda churned out relentlessly by the British Broadcasting Corporation:

The Beeb is a source of endless irritation to me. Auntie is old and heavily biased, but I still go back, a form of comfortable masochism, I suppose. 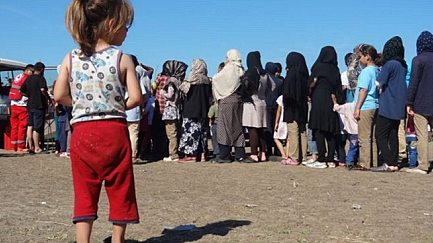 The photo above accompanied a BBC article with this title:

“Hungary deploys army to push migrants back to Serbia”

The picture is supposed to show migrants being sent back at the Hungarian border. So where are the migrants? All I see are unaccompanied women and their children.

“So who do you think you are kidding, Mr Hitler?”

Is the British public gullible enough? I suppose so, or else the Beeb would not do it…