Below is a recent op-ed by the well-known German opinion writer Henryk Broder. Many thanks to JLH for translating this piece from Die Welt:

Politics and Media Are in Their Own World

The citizens may not know everything, but they are capable of comparing the mottoes to what they see at their own front doors. 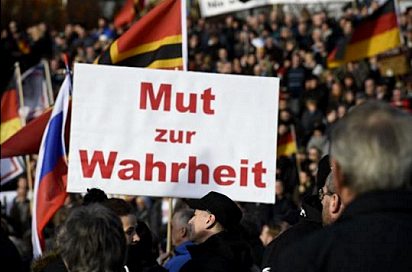 Lead photo: Pegida followers in Dresden call for “The Courage for the Truth.” The answers of politicians and the media completely, and obviously, ignore them.

Divers who do more than snorkel on the surface know the danger of coming up again — decompression. Gas bubbles form in the body, interrupting the blood supply.

The diver passes out, respiratory arrest occurs, the circulatory system shuts down. Before it is too late, the diver must be put into a pressure chamber, where the process of resurfacing is replicated slowly, under controlled conditions. Assuming good physical condition and with a little bit of luck, there should be no residual damage.

What is true for the individual diver also applies to whole societies that are going through a radical system change. The citizens of the GDR had only a few months to come up from the depths of their history. No pressure chamber would have been big enough for 17 million people.

The Phenomenon is Neither Exclusively Nor Typically East German

Ostalgie [made-up compound for “nostalgia for the East”] was not an expression of longing for a better yesterday, but an attempt to take leave of that yesterday in a way that was culturally and socially acceptable. You wore an FDJ[1] shirt, drank a Bitterfelder Edel-Pils[ner] and sang along with Frank Schöbel, “Ich geh vom Nordpol zum Südpol zu Fuß,”[2]

The phenomenon is neither exclusively nor typically East German. It also happens in the West, in the Federal Republic — admittedly under different auspices.

People “out there in the country” who have evidently gone astray, and are waiting for the political establishment to come and fetch them back, are overtaxed. They have to manage not only their own lives, but also those of “others.”

The lives of the poor and the needy of the Third World, of the refugees in Greek reception camps, of the single mothers who do not reach out for help to the fathers of their children, but to “society”, which is both guilty of and responsible for everything.

Those “people out there in the country” are repeatedly told that they must share their “prosperity”, and it is no longer fitting “in a globalized world” that “a part of it lives in wealth and peace while other regions are sinking in war and misery.”

So will global justice be achieved when everyone is living in war and misery? Is that why we are so fiercely determined to import the conflicts of the world to Germany?

They Find Out the Joke is on Them

The “ folks out in the country” i.e., “the people” or the “citizens” are not so schooled in dialectics as the authors of these bits of advice, but they do have a gut feeling that helps them to distinguish “right” from “false.” Or at least between “believable” and “fantasized.”

They are capable of comparing what they are told with what happens at their own front doors. And when they hear, for example, that immigration is “an enrichment for our country,” it dawns on them that someone is playing them for fools. They just wonder why.

They don’t like being called nationalists and racists because they won’t be sacrificed for a completely out-of-control immigration and allocation policy.

And they do not appreciate being insulted as a “rabble” by Sigmar Gabriel, who, in one of his rare bright moments, calls for a “social package for the indigenous” and the basis for this call is: We cannot allow “the impression that we would forget our own citizens.”

At such moments, it becomes clear to even the last, clueless, biological German that the “impression” Gabriel is trying to counteract, is not an impression, but an accomplished fact.

The Cosmetic Beautification of Reality

There is hardly a day when reality is not stood on its head, prettied up or whitewashed, as it was in the GDR with the “parade routes” set up for dignitary guests. Or now, when Claus Heber in Heute Journal introduces the outcome of a Swiss referendum on minimum wage with the comment that “something astonishing” had occurred.

“Almost one in four of the allegedly so conservative, frugal Swiss who took part in today’s referendum voted for a utopian idea.” Only later does the reader learn that 77% of the Swiss voted against it.

This kind of cosmetic beautification of reality is also found on a personal level. For instance, when a fire in a Düsseldorf refugee accommodation, which injured dozens, is downgraded by stages. It had been confirmed “that the fire was set ‘from the inside.’”

A Dream of “Lebensborn”[3] With an Immigration Background

In the long run, it has not paid to underestimate the “people in the country” just because it takes a while for them to articulate their displeasure. They may not understand energy transition down to the smallest detail, but they wonder at the fact that electricity is getting cheaper on the electricity exchange but more expensive for the users.

They are amazed to hear the minister for agriculture say “in a social market economy, it is not the task of the state to interfere in price policy,” just after the federal cabinet has decided to encourage the sale of electric autos with €4,000 per vehicle — for vehicles costing up to €60,000.

People out in the country wonder what planet Martin Schulz — the ubiquitous president of the European Parliament — is living on. In a speech on “Homeland, Flight and Identity in Times of Globalization,” he maintained that “What the refugees bring us” is “worth more than gold.” Because “It is an unswerving belief in the dream of Europe. A dream that we have lost track of.”

Is there anyone outside of Martin Schulz who is convinced that the refugees set out on the expensive, long and dangerous path to Europe, to save Europe? Possibly Wolfgang Schäuble, who said in an interview: “Isolation is what would destroy us, would make us degenerate into inbreeding.” That really sounded like a dream of Lebensborn, with an immigration twist.

Does Heiko Maas Have Nothing Else to Do?

And when the minister of justice announces he will forbid “sexual advertisement, “ the “people out in the land” do not break out in approving cheers. They wonder: Does the man have nothing else to do? The fact that he does not notice the mockery and the gleeful ridicule directed at him is just further proof of how comfortable he and his ilk have become on the far side of the moon.

Minister Maas, however, would like to “socialize” this job. In another interview, he said that the majority must “be silent no longer” — “We are all called upon: We must slowly pull back the curtain, open the window, show our faces and shout back.”

The Remake of the “Uprising of the Respectable”

It is not the first time a member of the administration has called on the silent majority to break its silence and speak out. After a failed arson attack on the Düsseldorf synagogue in early 2002, the federal chancellor at the time, Gerhard Schröder, called for an “Aufstand der Anständigen” — looking the other way, he said, was “no longer allowed.”

After it became known that the arsonists were not, as originally assumed, German rightist radicals, but two “ethnic Arabic” young men — a Moroccan with a German passport and a Palestinian from Jordan — the “Uprising of the Respectable” died aborning.

Now there is supposed to be a remake. Maas does not say what the citizens should shout after they pull back the curtains and show their faces. “Nazis go home!”, “No person is illegal!” or “Germany you crummy piece of s**t!”, as recently heard in a demonstration attended by Claudia Roth, vice president of the Bundestag. It is only clear that the silent majority is expected to bolster the regime.

What the Silent Majority Expects

And actually, the silent majority has enough to do. They have to get up early, take care of the children, drive to work, stand on the assembly line or sit at a desk for eight hours, drive home, go shopping, prepare supper and help the children with their homework.

The silent majority expects that the government will take care of the tasks for which it levies fees from income tax, VAT, tobacco tax, gasoline tax, business tax, liquor tax — that it will take care of internal security and not turn to the citizens for help. That would be like the trash removal service suggesting that citizens bring their trash to the dump to demonstrate their responsibility for the community.

There is only one solution. For the its next closed conference, instead of going to a castle out in the country, the government, should enter a pressure chamber, so they can make the transition from a virtual to the real world.

Other photos in order:

20 thoughts on “Politics and Media Are in Their Own World”