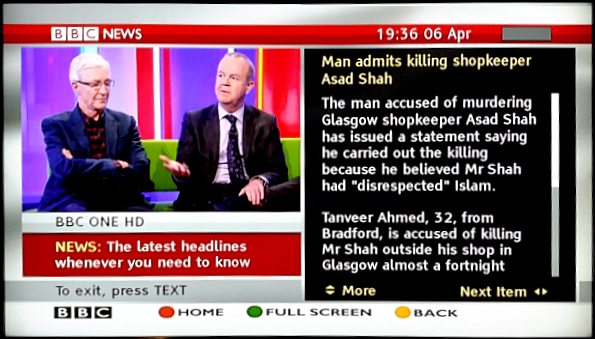 Nick just sent this screen photo of the Beeb’s news report about the killer of Asad Shah. A couple of weeks ago Mr. Shah was murdered outside his shop in Glasgow not long after he wished his Christian neighbors a happy Easter in an online message. His murderer, a fellow Muslim named Tanveer Ahmed, was eventually caught and charged. He had driven all the way from Bradford to Glasgow to do the grisly deed.

The murderer has now stated that he wanted to punish the victim for disrespecting Islam — that is, for blasphemy. In this he was acting in strict accordance with Islamic law.

Guidance on these matters may be found at AbdurRahman.org, under the heading “A Muslim is prohibited to congratulate the disbelievers, Christians, Jews or whomever, on their distinctive occasions”:

Muslims must resent disbelievers, dissociate themselves from them and hate their disbelief and disobedience to Allah, as Allah (Exalted be He) states, It was authentically reported that the Prophet (peace be upon him) stated, Anyone who imitates a people becomes one of them. the Shaykh of Islam Ibn Taymiyyah commented on this Hadith saying, “This Hadith at least implies that it is prohibited for a Muslim to imitate the disbelievers though it apparently signifies the disbelief of the imitator. Allah (Exalted be He) states, …and if any amongst you takes them as Auliyâ’, then surely he is one of them.

You (O Muhammad صلى الله عليه وسلم) will not find any people who believe in Allâh and the Last Day, making friendship with those who oppose Allâh and His Messenger (Muhammad صلى الله عليه وسلم) He (Glorified be He) states, O you who believe! Take not the Jews and the Christians as Auliyâ’ (friends, protectors, helpers), they are but Auliyâ’ of each other. And if any amongst you takes them as Auliyâ’, then surely he is one of them. Verily, Allâh guides not those people who are the Zâlimûn (polytheists and wrong-doers and unjust).

Thus, Muslims are not permitted to express joy or congratulate disbelievers on their festive occasions, whether by word of mouth, posters, newspapers, magazines, cards or the like. The legal authorities must remove these notices.

IslamWeb goes into greater detail on the same topic, citing authoritative scholars of the law:

Ibn Al-Baghdadi said: “It is not permitted to attend the festivals of the Christians and Jews. Ahmad also stated this, and his evidence for that is the verse (which means): “And those who do not witness falsehood…” [Quran 25: 72]. He said: “The Muslims are to be prevented from entering upon them in their synagogues and churches.”

Greeting the non-Muslims on Christmas and other religious holidays of theirs is Haraam, by consensus, as Ibn Al-Qayyim said in Ahkaam Ahl Al-Thimmah: “Congratulating the non-Muslims on the rituals that belong only to them is Haraam by consensus, as is congratulating them on their festivals and feasts by saying: ‘A happy festival to you’ or ‘May you enjoy your festival,’ and so on. If the one who says this has been saved from disbelief, it is still forbidden. It is like congratulating someone for prostrating to the cross, or even worse than that. It is as great a sin as congratulating someone for drinking wine, or murdering someone, or having illicit sexual relations, and so on. Many of those who have no respect for their religion fall into this error; they do not realize the offensiveness of their actions. Whoever congratulates a person for his disobedience or Bid’ah (innovation) or disbelief exposes himself to the Wrath and Anger of Allah.”

Congratulating the non-Muslims on their religious festivals implies that one accepts or approves of their rituals of disbelief, even if one would not accept those things for oneself. But the Muslim should not accept the rituals of disbelief or congratulate anyone else for them, because Allah Almighty does not accept any of that at all, as He Says (what means): “If you disbelieve – indeed, Allah is Free from need of you. And He does not approve for His servants disbelief. And if you are grateful, He approves it for you…” [Quran 39: 7]

And (what means): “. . . This day I have perfected for you your religion and completed My favor upon you and have approved for you Islam as religion. . .” [Quran 5: 3]. So congratulating them is forbidden, whether they are one’s colleagues at work or otherwise.

Ibn Al-Baghdadi was an 11th century jurist of Islamic law of the Shafi’ite school. Ibn Al-Qayyim was a 13th century Hanbali jurist. It’s therefore safe to say that these rulings enjoy a consensus of the scholars. Since the crimes implied are bid’ah (innovation) and kufr (unbelief), the death penalty is indicated. Thus Mr. Ahmed was simply the executioner of a shariah judgment against Mr. Shah, acting as an agent of the worldwide Ummah.

The fact that the victim was an adherent of the Ahmadi sect, a splinter group of Islam considered heretical by the mainstream, undoubtedly added to the zeal of the executioner.

22 thoughts on “From the BBC, This Just in: Dog Bites Man”