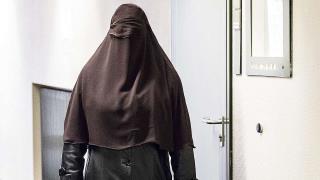 Last year a female culture-enricher in Munich defied a judge and refused to take off her niqab in court. The prosecutor appealed, and there will be a new trial. What’s galling about the whole thing is that German judicial authorities felt compelled to consult with an authoritative Islamic scholar in Saudi Arabia to get his permission under sharia for the woman to unveil herself before the judge.

Many thanks to Nash Montana for translating this article from Bild:

Munich county court wants a witness to take off her veil: Muslima Amira B. (43). She refuses to show her face during the trial.

Because the Muslim woman refused to take off her veil. The woman was wearing a so-called niqab, which completely cloaks her head, with a small slit for her eyes.

Judge Thomas Müller (55) said at the beginning of the hearing: “I would like to see your face, so I can see your reaction and your expressions.” Her answer: “Because of my expression? No I’m not doing that. Because of my religion.” The judge did not want to accept that at first.

When Amira B. said that she had already been screened at the entrance to court, he said: “No! I want to see you too. Otherwise I have huge problems with the evaluation of your statement.”

But even that didn’t make the burka woman change her mind. She remained unreasonable, called upon Islam: “I have one god at the end of the world, who will prove I am right.” The judge allowed her to testify veiled, and resignedly remarked during the trial: “I’m not going to open that Pandora’s box…”

This process was a cause for indignation all over the country within judicial circles. The prosecutor filed an appeal against the judgment; a new trial is coming. However: the judges are concerned that the Muslim woman will again refuse to show her face.

That is why the 22nd criminal chamber obtained an expert opinion of the high ranking Islamic legal scholar Sheikh Abdullah Al Muuslih from Saudi Arabia. This legal scholar already wrote in a similar case: “(…) that the taking off of the Niqab in front of judicial organs such as judges, police, prosecution etc. (…) on the base of necessity and prevention of damage (…) is allowed (…).

The court already assigned a witness advocate for the woman, and expects “procedural measures in the implementation of the request”. Which means, for instance: a fine, a court-ordered appearance, and — in a worst-case scenario — coercive detention.

15 thoughts on “Will a Munich Court Force a Muslima to Unveil?”