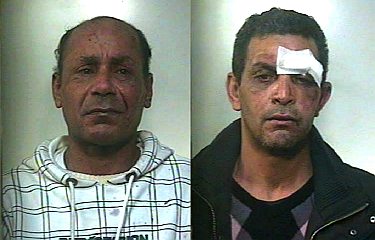 The tips for these two news stories from Italy just happened to come in this morning’s email back-to-back. Juxtaposed in that fashion, they seemed like two sides of the same coin.

The first article from ANSA is a feel-good story about Christians being nice to Muslims. Italians, like other Europeans, want to feel good about themselves, and long to make up for a past history of colonialism, racism, discrimination, etc blah yak, so they go out of their way to promote diversity and inclusion. This especially means being “welcoming” to Muslims:

(ANSA) — Pescara, December 9 — A 17-year-old Muslim student will play the role of Mary in a large nativity play organised by a school in Pescara, the institute’s head teacher said Wednesday. Some 200 pupils from seven different schools in the Adriatic coastal city will take part in the show, which is being staged by the Aterno-Manthoné Institute for the twentieth year.

“There will also be other Muslim students,” said head teacher Antonella Sanvitale.

“We gave students of different faiths full freedom to choose whether to take part, but it was them who asked us whether they could participate.

“We are happy to be able to send an important message of welcome.” The nativity play will take place on December 18 at 5.30pm in the surroundings of Piazzale della Madonnina.

The mayor of the city, Marco Alessandrini, will appear as one of the Three Wise Men.

The Muslim mentioned above is of unspecified nationality, but is presumably not from a culture that differs radically from that of the Muslims described in the second article. This story actually features two separate horrific incidents in different parts of Italy, and involves Albanians (victim and presumably also the perp), Algerians (perps), and a Kazakh (victim).

Are Italians really too obtuse to grasp that when you welcome the nice Virgin-Mary Muslim into your culture, you are also welcoming those who burn people to death?

It’s a package deal — Islam brings the behavioral sink with it into any culture foolish enough to import it. The fact that an occasional flower blooms in that foul sink is hardly a mitigating factor.

(ANSA) — Milan, December 9 — A man confessed to police on Wednesday to stabbing his wife to death overnight Tuesday, said police in the province of Varese, northwest of Milan. Police said the 30-year-old woman from Albania was killed in front of the couple’s children in their home after an argument.

Meanwhile, in the southern province of Caserta, near Naples, two Algerians were arrested and detained Wednesday after police found them with a woman burning alive in her bed.

Police said the woman’s boyfriend, Fakir Ali Cherif, and another man, Bach Sais Rachid — both 47-year-old homeless illegal immigrants from Algeria — had covered the 30-year-old woman from Kazakhstan with alcohol and set her on fire. When police arrived on the scene, they put out the flames using a bed sheet.

The woman is in hospital in life-threatening condition with burns covering 60% of her body.

14 thoughts on “Welcoming the Behavioral Sink into Italy”