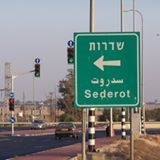 I think MC reported that the Iron Dome had been removed from over Sderot to deploy in more important places. Now that ISIS is in the area, things are heating up for the poor.

According to a report just now from Hope for Sderot on Face Book, two Kassam missiles just fell there.

In an earlier report from October 5th, the Sderot website reported:

As we slept Sunday night two Kassams were fired from Gaza. The Sheikh Omar Hadid Brigade, an offshoot of ISIS, claimed responsibility for the terrorist attacks. It seems that ISIS is now operating in Gaza. Their published goal is the unstabilizing of the August 2014 ceasefire for the purpose of starting another war between Hamas and Israel . With Hamas once again defeated ISIS hopes they can take control of Gaza.

This is not the first time The Sheikh Omar Hadid Brigade has claimed responsible for firing rockets into Israel. July 3, 2015 was their first claim of a terrorist act against innocent men, woman and children in Israel.

September 6th and 19th were the next times they claimed responsibility. One of the rockets fired on the 19th exploded in Sderot, damaging a house and a nearby bus, and once again setting everyone’s nerves on edge.

I have often compared the constant threat and the reality of the past fifteen and a half years of some 8000 rockets landing in Sderot as a wound that has scabbed over only for the scab to be ripped off; again and again, hence the ATSD (Accumulative Traumatic Stress Disorder) we suffer from.

12 thoughts on “When They Take the Iron Dome Away”