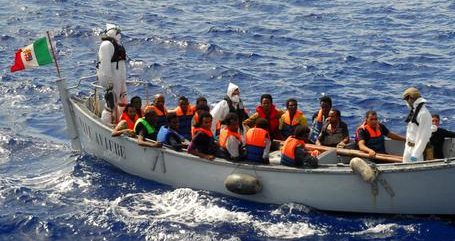 You’re a poverty-stricken peasant in Eritrea. Someone tells you about the amazing deal you can get in Europe, where they give you everything you want and you never have to work again. So you pay an extortionate amount of money to a trafficker, cross the desert to Libya, and board one of the rickety boats loaded with “refugees” heading for Italy.

The boat breaks down fifteen miles out and starts to sink — they almost always do — but it doesn’t matter, because the Italian coast guard or the Swedish navy rescues everyone who might otherwise drown, dropping their charges at the nearest European port of call, which is usually the island of Lampedusa.

The migration agency puts you up in a clean bed and gives you three squares while you wait for your case to be processed. You’re there for two weeks, basking in the sun and enjoying the sea breeze off the Med. Then what do you do?

Why, you stage a protest, of course! What else?

You demand your freedom, insist that your fingerprints not be taken, and call for the Islamic media to pay attention to your pitiful plight. And, if that doesn’t work, you jump into the sea.

It makes me wonder what the Eritrean word for “chutzpah” is.

I showed the article below to Vlad, and he had a few choice words to say: “Jumped into the water in protest? From a beach in Lampedusa? I wish I could afford to! I haven’t been to a warm ocean beach for decades. I would LOVE a cold drink on a hot beach.”

I told him he should revert to Islam, get himself a beanie and a nightgown, and show up at a Libyan port. Of course, he’d have to fork over a few grand for the privilege of climbing aboard one of those overloaded leaky boats. But at least he could count on a nice warm vacation on Lampedusa, courtesy of the Italian coast guard.

Here’s the story from ANSA:

(ANSA) — Palermo, October 9 — A group of about 50 migrants from Eritrea staged protests in the streets of Lampedusa on Friday, the third consecutive day of demonstrations by the group asking to leave the island.

The group chanted slogans including “freedom”, “no finger prints”, and “Al Jazeera contact us”.

On Thursday, divers rescued two men from the group who jumped into the water in protest.

The group has been in a migrant reception centre on the island for about two weeks.

9 thoughts on “Club Med for Whiners”