In 2010, Kingsley Okoro left his native Nigeria in West Africa and traveled across the Sahara. With the aid of people smugglers, he crossed the Mediterranean in a rubber dinghy in search of a better life in Europe. Five years later, his dream of a better life in Denmark did not come true. Now, he has a new dream: To return to Nigeria and be reunited with his five-year-old son, whom he left behind. “Life in Denmark has given me mixed feelings. Denmark itself is not the problem. People are very friendly. The problem is that I am not able to adapt to the system,” the bottle collector Okoro says. “I did not know it was this hard to get want you wanted in Europe. I thought it would take a couple of months, then I would get a house and a car. But it takes time.”[1]

Maybe it comes as a surprise to some Africans, but not all Europeans have a car and a house, either. Those that do usually work far longer than a couple of months to earn it. A long time ago, Europe was a civilization of ancient nations that produced the likes of Isaac Newton, Nicolaus Copernicus, Leonardo da Vinci, Ludwig van Beethoven and Louis Pasteur. These days, Europe seems to be a place where Nigerians, Somalis, Congolese, Syrians, Iraqis, Afghans and Pakistanis travel to get free stuff handed to them from the natives. 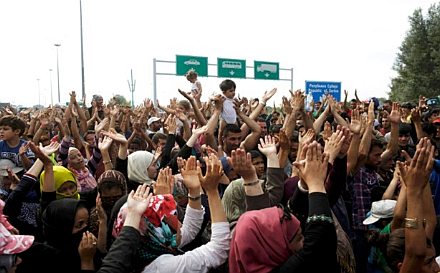 On October 6, 2015, thousands of people marched in Copenhagen to demand that Denmark be more open to migrants. Carrying torches, demonstrators shouted slogans like: “Say it loud and clear, refugees are welcome here.” A cheer went up as thousands entered the public square outside of Parliament.

At the same time, some of these “refugees” were complaining about the level of service they were being provided by the taxpayers in Finland. The asylum seekers mainly seem to be young Muslim men coming from such vibrant places as Afghanistan, Iraq and Syria. One of them was filmed stating that “We want our money” and that the UN must help them in getting what they want.[2] Some of the migrants complain that the food they get served for free is suitable only for animals, that the country is too cold, too boring or that there are too many trees.

In Sweden, the authorities resort to increasingly desperate options to accommodate the vast numbers of migrants, including sports centers and campsites. One of the bureaucrats in charge of dismantling the Swedish nation is Anders Danielsson. He was head of the Swedish Security Service (Säpo) from 2007 to 2012 and is currently Director General of the Swedish Migration Agency (Migrationsverket). By October 2015, more than one thousand asylum seekers were arriving daily in Sweden.[3] Danielsson is organizing the reception of so many asylum seekers that they may soon turn his own people into a minority in Sweden. Mr. Danielsson is so proud of contributing to this that he compares himself to Winston Churchill. Churchill fought against an invasion of his country; he did not facilitate it. The Swedish Migration Agency decided that every single person from Syria should get permanent residency immediately. They informed the government about their decision, Danielsson comments. He says in plain words that they “must ignore the consequences” of their own decisions.[4]

The neighbors of the many asylum centers, however, have to live with the consequences of this immigration on a daily basis. So must the Swedish nation, forever. How many war criminals or potential terrorists enter the country amidst this massive influx of migrants? Does anybody know? In 2016 the Swedish government intends to force all Swedish municipalities to accept migrants, even though there is a chronic shortage of housing.

In October 2015, police officers in Gothenburg (Göteborg), Sweden’s second-largest city, warned that criminal ethnic gangs have taken control of entire neighborhoods in the city’s suburbs.[5] Fear and public gang shootings have become part of everyday life in Sweden. Many witnesses no longer dare speak to the police. Criminals threaten teachers and municipal employees. Gothenburg was once famous for housing the headquarters of the car manufacturer Volvo. These days, it is one of the European cities that has sent the most Jihadists to fight for the Islamic State in the Middle East. In one Gothenburg school, Angeredsgymnasiet, the headmaster warns that sympathies for the brutal mass murderers of the Islamic State is something they encounter among their pupils “on a daily basis.”[6] Meanwhile, many more asylum seekers from the Islamic world enter every day.

Germany is experiencing an unprecedented inflow of asylum seekers. The total number of asylum seekers to Germany in 2015 could be as high as 1.5 million people.[7] Since the authorities and German Chancellor Angela Merkel have virtually abdicated and left the country’s borders more or less open, the influx will not doubt continue next year as well. Once they have a foothold, many of the migrants will continue to bring relatives from their original home countries to Europe. A couple of million migrants could thus soon turn into 10, 15 or even 20 million people coming from all over the Islamic world and Africa. 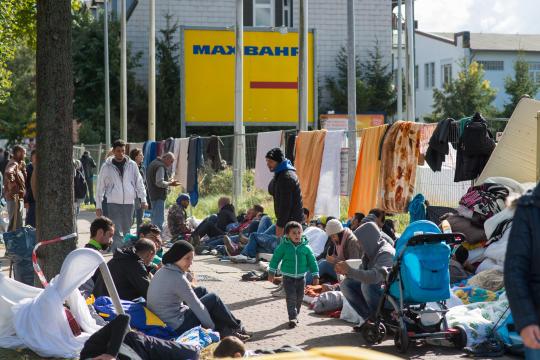 The understaffed police have repeatedly had to stop violent conflicts between Kurdish and Turkish Muslims in German cities. Sometimes asylum seekers harass Christians or Jews. Other times, Muslim men harass women either at reception centers or in the local community.[8] Mass brawls have broken out between Afghan Muslims and Syrian Muslims over something as trivial as who should visit the bathroom first. How can anybody believe that such primitive honor cultures can be absorbed into a European culture that is radically different? It is rather an exhausted and demoralized Europe that risks being reduced to an appendix of the Middle East.