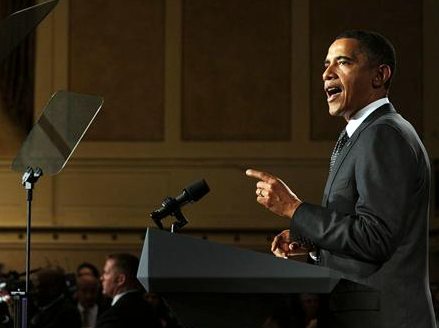 Many of us at Gates of Vienna don’t distinguish between “Islam” and “Radical Islam”. When push comes to shove, to us it’s all the same 1400 years of treacherous barbarity. ISIS gets the headlines at the moment because it knows what the media want. But that’s merely tactical.

However, one can see why others might make such a distinction; thus for the sake of this essay let’s just bracket any differences in order to examine a City Journal essay which seeks to discern the strangeness of Obama’s seeming disconnect about reality and Islamity (yes, that’s my own neologism. “Islamity” and “insanity” seem to be cut from the same black cloth of destruction and death. Obama maybe has a silky tee shirt made of the very same fibers).

Mr. Whalen’s considerations of Obama’s need to “play dumb” about RadIS have the ring of truth, and for that they deserve your attention. They resonate.

All of us know President Obama has done serious damage to the morale of average American citizens with his dissembling and dodging. He appears to be a congenital prevaricator, and his game of dodge ball is similar to President Clinton’s pushback against the scores of women who found ol’ Billy less than a gentleman. Look back to Clinton’s infamous “it depends on what the meaning of ‘is’ is” and you have the essence of the fakery of Obama’s semantics. Same old repetitive dissembling, maybe for different reasons, maybe not. It just may be the case that in his head, semantics is all that counts. Integrity never even gets to sit on the bench in the sport he plays on us.

Mr. Whalen describes Obama’s long-standing refusal to discuss reality as average Americans understand it, and he ticks off some examples of the divide. Then he says [with my emphases]:

Obama’s main source of political support comes from secularized segments of the American population, mostly progressives who — unlike the working-class and Christian conservatives Obama despises — don’t “cling to guns or religion.”

Nevertheless, Obama and his fellow progressives do follow a moral code, which is usually described as Political Correctness (PC). They enforce their PC morality with an iron hand. Tell the PC gang that Bruce Jenner is not a woman, or that you’re a Redskins fan, or that all lives matter and — aided by accomplices in the mainstream media — they will label you a racist and run you out of town. [or find other ways to silence/ruin you — D] But tell them you’ve just murdered four Marines and a sailor, and they’ll focus on your dysfunctional family. Tell President Obama four Jews were gunned down by an Islamic radical in a kosher market in Paris, and he’ll call the attack “random.”

And should some black teenage thug get killed while showing how he’s too cool for rules, you can almost say Obama’s lines with him in the aftermath. We’ve witnessed enough of these in the past seven years to know already that he will have an opinion, he will state his adolescent solidarity with the thug, and he will make an explosive situation worse before he leaves to play golf while municipalities are left to clean up the mess Obama created. Deliberately.

It has become increasingly obvious that this President no longer cares whether anyone outside his “secularized segments” believes him. Complain about it and you’re simply one of “them”; the left has been turning “them” into organisms that take up too much room for a long time now.

Mr. Whalen makes an important distinction, though, between PC’s moral vacuousness and what he calls KC — i.e. Koranic Correctness:

On issues it deems crucial, such as climate change and gay marriage, PC wages relentless campaigns of moral indignation. One might think that PC would be eager to campaign against Koranic Correctness (KC), which advocates the opposite of everything PC holds dear. As enforced by ISIS, KC allows slavery, the oppression of women, capital punishment, torture, intolerance, crucifixion, guns, child marriage, stoning adulterous women, and the execution of homosexuals. PC is “horrified” by KC’s return to the medieval beginnings of Islam. But instead of admitting that KC has declared religious war, PC professes only to be “baffled.” [Being baffled is the new weapon of choice among those who don’t believe in real weapons — except in the case of their own bodyguards, where real weapons are required.-D]

Why does PC retreat into this contrived state of confusion? Possibly because finding oneself in a religious war without a religion is like being in a knife fight without a knife. Religion has long been a powerful motivator in human affairs and a moral armament on the battlefield. But PC, which considers itself too smart for theology, has been working overtime to eliminate any presence of religion in American life. Progressives can only strike at ISIS with the PC weapons they use on Republicans. State Department spokeswoman Marie Harf suggested, for example, that ISIS fighters might be deterred from their bloody work by a jobs program.

PC finds itself face-to-face with a mirror image of itself. It wants KC to be some kind of desert street gang that can be controlled by understanding the root causes of its rage. But alas for PC, KC has no interest in winning shouting matches on cable news. For KC, Islamic law is “settled science”. For 1,000 years, KC has had one rule for atheists: convert or die. In Paris, the survivors at Charlie Hebdo have promised not to publish any more images of the Prophet Muhammad.
PC shrinks from the fray. Progressives keep blaming George W. Bush and keep trying to see radical Islamic attackers as a “senseless” assortment of “lone gunmen.” They deny reality because KC enjoys what military analysts would call an “asymmetric advantage” over PC, which has unilaterally disarmed. KC doesn’t just cling to its religion and guns — it uses them. Progressives don’t play dumb because they are afraid to offend; they play dumb because they are afraid.

In other words, KC has the weapons while all PC has left is words. Words won’t save them. Eventually Obama & Co, even waving FOUR teleprompters at ISIS, won’t be safe.

But long before that Obama will have ceased to be relevant. Will he care? As long as he can escape without appearing to cringe, he’ll probably remain relatively intact. Oh my! Sympathy for whomever follows him! Unlike George Bush’s reticence to talk about his successor, we’ll probably hear Obama’s opinion on America’s affairs far more than we’d like. After all, it’s what he does best now, editorializing on individual mistakes and misfortunes with his whim theory still firmly in place covering the family jewels.

We can’t figure out what Obama’s policy is because he doesn’t have a coherent, congruent plan for anything. “Bully them off the court” is the best he can do. We don’t know what he’s thinking because he doesn’t know either: he makes stuff up as he goes along.

40 thoughts on ““Playing Ever Dumb(er) About Radical Islam””