Anyone who has been reading this website for a while knows my great admiration for the Colonel John Boyd’s OODA Loop. He used this term to describe how a pilot could keep ahead of his enemy — or behind in the case of aviation combat — so as to win any encounter. In many hours of training younger, fitter, hot-shot jet pilots, Boyd would repeatedly challenge them to beat him. No one ever did.

Here’s a schematic similar to those he used in the hundreds of briefings he did over the years at the Pentagon (a place he derisively named “The Building”) and later at various war colleges. 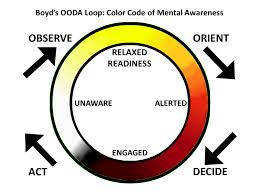 For some years Colonel Boyd’s ideas were widely studied in a number of venues. Boyd was an Air Force officer, but following the familiar dictum about a prophet being without honor in his own country, it was not the Air Force who adopted his ideas, but the Marine Corps. And they did so with great enthusiasm. Their use gradually spread into other fields where competition and staying one step ahead meant success for those who learned to apply the principles with some discernment.

When I read this story in The Daily Mail — which I picked up in the Twitter feed — about the two American Marines on leave in Belgium, the fine print riveted my attention:

Belgian journalist Marin Buxant tweeted that the US Marines were on leave in Brussels when they spotted the man and followed him on the train. When the suspect went into the toilet, the Marines recognised the sound of a weapon being armed and decided to act immediately.

The rest of the story is drama (though being shot in the neck, as one Marine was, isn’t “drama” — but if that jarhead is conscious, he’s already been replaying the scene in his head countless times to figure out how he could have avoided that slug. He will be drawing cold comfort from the fact he prevented over three hundred more rounds from being fired into the passengers on that train).

I usually suggest this book, which I have read several times and loaned out; I’m not now sure to whom:

Boyd: The Fighter Pilot Who Changed the Art of War

However, I see there is a much newer book, tying Boyd’s ideas to “The War on Terror”:

A Vision So Noble: John Boyd, the OODA Loop, and America’s War on Terror

There were far fewer reviews of the second book than the classic by Coram, but one reader/commenter said he found it an “excellent distillation”.

[The second page also informed me, in Amazon’s inimitable record-keeping style, that I’d already purchased A Vision So Noble in May 2012. This happens to me all too frequently: since I belong to Amazon’s “Book Bub” I get daily notices about specials on books (most of them trash, some of them keepers). I go only for the free ones, but they have to meet a basic criterion: that the freebies don’t appear to be post-menopausal chick lit or the equally predictable but manly dic-lit. Ugh.

I think Vision got lost in the crush of that book/bub/hub so I’ve retrieved it; very glad to have this chance at it since I can’t pay for books anymore, and besides, they’re too heavy to hold. C’est la guerre. I’ll admit to having considered begging some authors for review copies, but since I’m too unreliable to keep any bargains, I don’t do that. Sigh.]

Since I haven’t read Vision I can’t tell you his details. But Coram’s book was honest about Boyd’s feet of clay and some worshipers didn’t like delving into his less-than-ideal family life. No, Boyd wasn’t a drinker or a womanizer, he was simply on a mission to change the military milieu into something capable of winning wars and it made him neglectful of his family. I do believe having Obama as his Commander-in-Chief would have sent the Colonel barreling into the Funny Farm.

After seeing what these two Marines did, I have hope that the OODA Loop is alive and well in the lower echelons, those way-down-in-the-military-food-chain where brain matter hasn’t ossified into hyperawareness of the Main Chance.

France and Belgium and the Netherlands ought to get together long enough to give these two Americans several medals a piece.

Semper Fi, y’all. Think of it as an early present for November 10th.