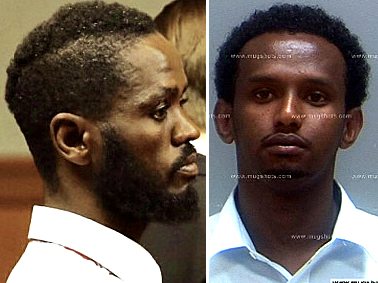 A horrific crime that may have been religiously motivated took place earlier this month in Portland, Maine. A Christian man was savagely beaten to death by three Muslims, but there is almost no information about the Islamic aspect of the murder in mainstream media reports. It’s possible that the victim was actually beaten with his own Bible, but don’t expect to read that niggling detail in any major newspaper.

By the way: the incident has a Mohammed Coefficient of 66.7% — of the three suspected perpetrators, one has a name with a double-Mo.

First let’s look at the TV news report. Many thanks to Vlad Tepes for uploading and annotating this video:

WMTV has the bare bones of the story, minus any information about religious affiliation, as in the screen report:

The affidavit, released Monday, said Akoa was beaten for several hours the night of Aug. 9 by three men with whom he was drinking beer.

Akoa’s body was discovered on his living room floor on Aug. 11 after his family requested a well-being check.

Detectives found a purse in the apartment that lea them to a woman who said she was there the night Akoa was beaten, documents reveal.

The woman told police there were also three other men there who got into a fight with Akoa.

Police used surveillance video to identify the men as Abil Teshome, Mohamud Mohamed and Osam [sic] Sheikh. All three are charged with murder.

Detective said Teshome admitted to assaulting Akoa but he believed Akoa was alive when he left the apartment.

Akoa’s autopsy revealed 22 rib fractures, a lacerated liver, cuts and bruises over his entire body, including several impacts to his head and torso. Those injuries, if left untreated, would cause death, the medical examiner said.

Teshome, Mohamed and Sheikh are being held without bail at the Cumberland County Jail.

The Portland Press Herald is somewhat more forthright. At least it mentions the victim’s bloodied Bible:

Man found dead in Portland apartment had been beaten, kicked to death

A judge unseals an affidavit filed by a Portland detective that reveals how Freddy Akoa, 49, was killed in his Cumberland Avenue apartment.

Freddy Akoa, the Portland man found dead in his Cumberland Avenue apartment this month, had been beaten, kicked and bashed in the head with furniture by his drinking companions during an assault that went on for hours.

Akoa, 49, had 22 rib fractures from the savage attack, cuts and bruises all over his head and torso, and a lacerated liver when his accused killers left him on his living room floor in Apartment 18 at 457 Cumberland Ave. on the morning of Aug. 10.

Those details were made public for the first time Monday when a judge at the Cumberland County Courthouse unsealed an affidavit filed by Portland police Detective Christopher Giesecke to obtain an arrest warrant for three men accused in the killing.

The affidavit had been sealed at a prosecutor’s request for one week after three accused killers appeared in court, each on a charge of murder by depraved indifference. The three — Abil Teshome, 23, Osman Sheikh, 31, and Mohamud Mohamed, 36 — are each being held without bail at the Cumberland County Jail.

The affidavit details how police first learned of Akoa’s death on Aug. 11, and how clues left in the apartment and video surveillance camera recordings quickly led detectives to interview a witness and take the three suspects into custody.

But the document gives no indication of a motive for the men accused in the slaying, who were seen in surveillance footage entering the apartment building with Akoa and a woman on Aug. 9 at 4:40 p.m.

Akoa’s mother, Jeannie Mendomo, became concerned after she couldn’t reach her son by phone and no one answered the door at his apartment. She called the building’s management company to check on him. Two of the company’s representatives used a key to go in the apartment after noon on Aug. 11 and found him dead on the floor with a swollen and bloodied face, Giesecke wrote in the affidavit.

The detectives who arrived found the apartment in disarray, with empty beer cans on the counter and clothes and trash strewn about. On the floor near Akoa’s head was a Bible splattered in blood. Beneath his body was an official court document with Mohamed’s name on it. On the kitchen counter was a purse with contents inside with the name of Jennifer Wilson on them, Giesecke stated.

That afternoon, two detectives found Wilson at the Preble Street Resource Center in Portland, and before they could question her, she asked them, “How is Freddy?” Giesecke wrote.

Wilson told police that she and Akoa and the three men had all walked together to Akoa’s apartment on Aug. 9 after buying beer at a Park Avenue convenience store. She told them that they had been drinking for only about 10 minutes before an argument began in a language that Wilson did not understand, the affidavit states.

Police later found Teshome, Mohamed and Sheikh in Deering Oaks park on the morning of Aug. 13 and arrested Teshome on a charge of criminal trespassing.

Teshome allegedly told Detective Richard Vogel in an interview at the Portland police station after his arrest that he had become angry at Akoa’s apartment and that he Mohamed and Sheikh all assaulted him.

“Teshome said he lost control of himself and started hitting Akoa several times in the head. Teshome admitted to punching and kicking Akoa multiple times and knocking him to the ground. Teshome also stated that he also struck Akoa with his hands and feet while Akoa was lying on the ground,” Giesecke wrote.

Teshome also allegedly confessed that he used a board from a makeshift coffee table to beat Akoa over the head and to strike his foot, the affidavit states.

“(Teshome) said that he and Sheikh left Akoa’s apartment around the same time and that he believed Akoa was alive when he left,” Giesecke wrote.

Video surveillance footage from the apartment building shows Wilson and Mohamed leaving the building at 5:38 a.m. on Aug. 10, but Teshome and Sheikh cannot be seen in the footage, the affidavit states.

Police did not charge Wilson in connection with Akoa’s death.

If convicted of murder, each of the men will face a minimum of 25 years and up to life in prison.

It takes an honestly “biased” outlet, Top Right News, to provide the “Islamophobic” details of the crime:

Portland, Maine has been shocked by a monstrous crime perpetrated by three Muslim immigrants who spent hours beating a Christian man to death after being invited to his home for a party.

But what was found next to his battered body was truly heartbreaking… and should move Americans to action.

The three Muslims were at the home of Freddy Akoa when at some point they decided to slowly murder him by spending hours kicking him, punching him, and hitting him with a piece of furniture until he finally died from his grievous injuries.

A judge on Monday unsealed the court documents of a grisly murder of a Christian man, allegedly at the hands of three Muslim immigrants in Portland, Maine.

In those documents, which had been sealed since the three men were charged Aug. 11, police said they found the brutally beaten body of Freddy Akoa lying on the living-room floor in his apartment. He was the victim of a savage attack that took place over several hours.

According to the autopsy report, he had cuts and bruises all over his body, with the fatal blows coming to his head.

Akoa, 49, apparently knew his assailants, but police have not commented on the nature of their relationship.

He had been beaten and kicked in the head, and bashed in the head with a piece of furniture in an assault that continued relentlessly for hours, police said in the arrest affidavit.

Of the three Muslim assailants, at least two have common Somali names — Mohamud Mohamed, 36, and Osman Sheikh, 31. The third suspect is Abil Teshome, 23.

There were several other people in the apartment when the altercation broke out, Vogel told WND. But how many of them understood what was being said is in question, since the arrest affidavit states that the words being exchanged between Akoa and his assailants were not in English.

A neighbor said he believes the Muslim men got into an argument, “objecting to the victim’s religion”. This is corroborated by the heartbreaking thing police found next to Akoa’s head: the victim’s own King James Bible, drenched in his blood.

Police would not respond to questions about whether the victim was beaten with his own Holy Book.

In fact, not only are the local police are refusing to say that this is a hate crime perpetrated by Muslims who hate Christians, but the Maine media as well is refusing to even mention the national origin or religion of the murderers.

One detective, cornered by a reporter, acted as though he had a gag order on him:

“I can’t go into any of the details,” Detective Rich Vogel of the Portland Police Department told WND. “I’m just not at liberty to give out any information about a case that’s subject to an ongoing investigation. Eventually the whole story will come out.”

Eventually? About such a horrific crime? So much for the public’s right to know, especially regarding yet another act of Muslim savagery on American soil…

15 thoughts on “Beaten to Death With His Own Bible”