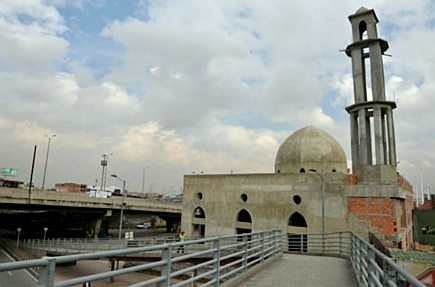 Islam has made serious inroads into South America. Hezbollah is know to be active there, particularly in the Tri-Border Area, and Venezuela has been working with Iran for decades. Narco-terrorists and Marxist groups in the region reportedly cooperate with Al Qaeda and other Islamic terror outfits to help smuggle pseudo-Latino operatives across the border between Mexico and the United States.

We don’t often cover these issues, mostly due to a lack of correspondents in the region (see Fausta’s Blog for comprehensive information on Latin American issues, including the Iranian penetration of South America). To help remedy that, below is an email sent to us yesterday by a young Colombian student named Diego. He presents a brief overview of the Islamization of his country and its neighbors:

I am a law student in Colombia, and I wanted to comment on developments on this region of the world, which is so overlooked but might soon become part of the fight against Global Jihad.

I was still too young to remember when, but I can say that at least from the mid-2000s, the Venezuelan Regime of Hugo Chavez began forging ties with Iran. At the time, here in Colombia, Chavez’s Venezuela was looked upon by the mamertos (derogatory term for the left) as a model, just like Cuba. It took me some time, growing up and reading a lot, just to make the connections.

During the 2000s the political discourse was dominated by the narrative of “Narco-Communist Terrorists”. Maybe it is because it has been going on for a long time, or maybe because we have not had the eye-opening experience of Madrid, London or New York, and of course, the big bad guy was Chavez. At the time what most of us ignored was that he was letting Hizbullah in. They had (I am not sure if they still have, but I would not be surprised if they do) camps in Venezuela.

And of course there is the link with Iran’s nuclear program. In the Esequibo zone, the region of Guyana that Venezuela has been reclaiming since the 19th century, there was the discovery of a rather large uranium mine, some parts of it even crossing into the Venezuelan side of the border.

Remember the explosion at the Amuay refinery? Well, there are rumors — for now just rumors — that there was a cover-up for a possible nuclear centrifuge in Amuay; it just blew up before it could start operating. There is no real way to prove these rumors, but something more real, and to me more frightening, is the fact that Iran helped Venezuela build a drone factory at Maracay. And then there were also the planes with aid sent to “Palestine”, at a time when there is hunger and scarcity in Venezuela.

Anti-Semitic speech has been growing in a covert way in South America, and mixed with a small and usually quiet but now more present Muslim minority in Colombia… well, we may still be able to stop it, but our current president seems just as suicidal as European leaders. If he doesn’t sell the nation to FARC, he might do so to the Islamists in Tehran. But I am getting away from what I am really afraid of.

My mother and grandmother told me that, in the past, when people thought about World War III here, it was always a foreign event, let the Gringos and Russkis kill each other and wait until things get better.

But now I fear that a new missile crisis will happen. Venezuela is getting closer and closer to Iran, and while it seems now to be nearing civil war, there is still the rest of ALBA (Alianza Bolivariana para los Pueblos de Nuestra América, Bolivarian Alliance for the Peoples of our America), Nicaragua, Ecuador, Bolivia, Argentina… they all could be the next Cuba, holding enemy nuclear weapons targeted at US Cities.

Only in the next Missile Crisis, we won’t have a Khrushchev to calm things down and take the missiles away…

P.S: As for the Muslims in Colombia — I don’t know whose idea was to put a mosque next to the most prestigious Cadet School here, La Escuela Militar de Cadetes José María Córdoba in Bogotá. It’s as if someone put a mosque 100 meters away from West Point Academy. It is an attractive building, but there is something that stinks on it…

For more on the controversy over the mosque in Bogotá, and the “Islamophobes” who opposed it, see this an article from July 2013 in El Espectador (in Spanish).

19 thoughts on “The Islamization of South America”