Today is the twenty-second anniversary of the destruction of the Babri mosque at Ayodhya in India. 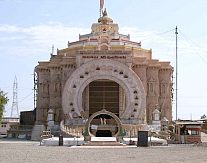 I first wrote about Ayodhya back in 2005, and again in more detail (thanks to Thoughts of a nationalist Indian) in 2009. The ancient Hindu temple at Ayodhya, venerated as the birthplace of Rama, was destroyed by the Muslim invaders, and the Babri Mosque built on the site.

On December 6, 1992, a group of Hindu nationalists gathered at the site and reversed that process, destroying the mosque. A new Hindu temple was later built at the location.

Hence today’s tensions in Ayodhya, necessitating a strong presence of well-armed military guards at the site:

2 thoughts on “Ayodhya on Alert”