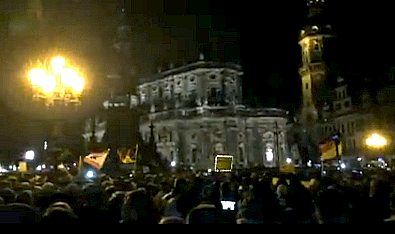 Tonight’s rally in Dresden reportedly drew 17,500 grassroots protesters. I don’t have any extensive reports yet in English, but here are some links:

Concerning this German TV news report on the PEGIDA demonstration in Dresden (and the counter-demonstrators), Rembrandt Clancy has kindly provided this summary:

The anchor, Judith Rakers, announces that again thousands of PEGIDA demonstrators gathered to demonstrate against an “alleged Islamisation of the West”. Parallel to that, thousands of counter-demonstrations have taken place in several cities “against racism and exclusion”. The President of the Council of the Evangelical Churches in Germany, Bedford-Strohm, warned against demonising PEGIDA and “urged a discussion which deals with substantive content”.

At that point we hear the Christmas Carols, which the reporter on location says are being sung before the Semperoper [opera house] in Dresden. The first woman interviewed says she is there because of the ignorance and mendacity of their politicians. The reporter then says that thousands of counter-demonstrators are separated from the PEGIDA demonstrators only by a police cordon.

The scene switches to the Dresden Kreutzkirche [which is Lutheran]. The reporter describes the gathering as a protest against PEGIDA and their singing of Christmas carols.

Then Jochen Bohl is interviewed. He is a state bishop for the Evangelical Lutheran State Church of Saxony. He finds it unaesthetic when people use Christmas carols to put across a political message. He says it is not the meaning of Christmas nor of the carols, and for that reason he takes a very critical stance against it.

The reporter closes by saying that PEGIDA polarises, also on this Monday when Dresden is far removed from Christmas peace.

9 thoughts on “A PEGIDA Roundup”