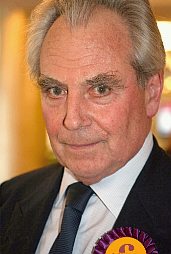 Right about now Tommy Robinson is appearing at a Q&A session in the Oxford Union, where he is legally enjoined not to mention JIM.

Lord Pearson (more fully, Malcolm Everard MacLaren Pearson, Baron Pearson of Rannoch), a former leader of UKIP, is not subject to any such constraints. He has just been taken to task for saying “Islamophobic” things in the House of Lords.

Green Infidel sends the following brief report on what happened.

According to the The Guardian:

[Lord Pearson] told peers: “My lords, are the government aware that Fusilier Rigby’s murderers quoted 22 verses of the Qur’an to justify their atrocity? Therefore, is the prime minister accurate or helpful when he describes it as a betrayal of Islam? Since the vast majority of Muslims are our peace-loving friends, should we not encourage them to address the violence in the Qur’an — and indeed in the life and the example of Muhammad?

Predictably, a “culturally enriched” lord took exception. But take a look at what he found the most “offensive”:

“I find it absolutely offensive that this guy is still able to say this. I will actually tomorrow make a complaint formally to the lords speaker on this issue. This is not tolerable and it should not be tolerated at all.”

That’s right — he wants the mere suggestion that the Quran and life of Muhammad consist of more than just peace, love and flowery words to be made illegal.

Am I allowed to be offended by this?

32 thoughts on “The Intolerable Lord Pearson”