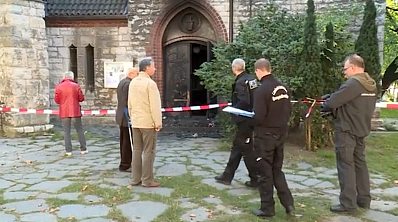 Rembrandt Clancy has translated an annotated an article about last week’s arson attack against a Coptic church in the Lichtenberg district of Berlin.

I have been unable to find an update on this article, nor do other articles offer any additional details of significance. However, in the light of the silence over the very clear arson attack on the Lutheran church in Garson (August 2013), it remains to be explained why the evangelical press, the party of The Left (Die Linke) through its organ neues delutschland, as well as the radically left spokesman on religion for the Greens, Volker Beck, are presently incensed over the burning of a waste disposal bin directly outside a Coptic church. According to evangelical internet portal aktuell,

The religion spokesman for the Greens’ faction in the German Bundestag, Volker Beck, called the event frightful. Arson attacks on houses of worship are attacks against religious freedom and hence on the basis of the constitutional state and democracy.

JLH makes the following observation about the source of this article, neues deutschland: Socialist Daily:

… the newspaper is an old house organ of the East German regime, now independent. And the resistance that flared up leading to the mass exodus even before the fall of the Wall was supported in the Lutheran and other protestant churches in Leipzig and other major cities.

Arson at a Coptic Church

Unknown persons have set fire to the only Coptic church in Berlin. A refugee was sleeping in the church. He remains uninjured. The church offers refugees a home.

Unknown persons have set fire to Berlin’s only Coptic church in the borough of Lichtenberg. A 27-year-old refugee who assists in the church as an altar server, and who was sleeping there, remains unhurt, explained the Coptic Bishop for Germany, Anba Damian, to the press agency dpa [Deutsche Presse Agentur]. This is a new level of violence, he said: “Never in my life would I have expected such a thing in a constitutional state like Germany”, added Damian. “In our homeland we are accustomed to our churches being set on fire.” The Coptic church constitutes the largest Christian community in the Near and Middle East.

On Sunday, after having collected evidence, the police provided no new information. The State Protection Office is continuing their investigation. Their purpose is to clarify whether the “particularly serious incendiarism” was intended to affect the church directly.

According to investigations to date, at about six o’clock Sunday morning the perpetrator ignited a refuse bin adjacent to the side door of the church. A female passerby noticed the fire and called the fire department. By then the flames had already spread to the church’s massive wooden door. The fire brigade extinguished the blaze before it could destroy other parts of the church.

The Governing Mayor of Berlin, Klaus Wowereit (SPD — Social Democratic Party of Germany) in a prepared statement spoke of a “crime against the peaceful social coexistence of all Berliners, independent of their religious affiliation”. He continued: “Such cowardly acts are never acceptable, but will always meet with resistance from the people of our city”.

The church offers refugees a home, reported Bishop Damian. He said that at night the 27-ear-ld, who had been sleeping there, prepares the sacred bread for the liturgy. “He is a very faithful soul”, said Damian. But the man is doing well; it was he who phoned Damian in the morning and told him about the fire.

Also Senator of the Interior, Frank Henkel (CDU — Christian Democratic Union), issued a statement concerning the fire: “Who attacks houses of worship, also attacks cosmopolitan and tolerant Berlin. This cowardly act is directed at all of us,” he said. He assured the Coptic congregation that the Berlin police will do everything in their power to apprehend the perpetrator or perpetrators. Accordingly, they will investigate all possible leads. In the past the church has been burgled with increasing frequency, said Bishop Damian. But in those cases it probably had more to do with articles of value. Hence thieves have purloined, for example, silver vessels.

There are ten Coptic Orthodox parishes in Germany. The church in Lichtenberg was formerly evangelical and was built at the turn of the twentieth century. But since 1998 it has belonged to the Coptic congregation of Berlin.

In Egypt in the past, despite statutory religious freedom, severe, violent confrontations have repeatedly occurred between Muslims and Copts. Under the rule of the Muslim Brotherhood, attacks on Christians had occurred with increasing frequency. dpa/nd

One thought on “Arson at a Coptic Church in Berlin”