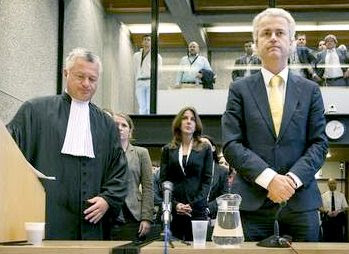 Geert Wilders may be facing another show trial for “group defamation, discrimination and incitement to hatred”. Mr. Wilders, the leader of the Dutch Islam-critical party PVV, caused controversy by agreeing with what most Dutch people think (if you believe the opinion polls) about the excessive number of Moroccans now in their country.

The following article was published today on the front page of the Dutch newspaper De Telegraaf. A translation has been made available by the PVV.

Note the political nature of the proposed prosecution — two judges have been appointed by the court to work with the media:

The court in The Hague is busy preparing the criminal trial against Geert Wilders, although the judicial authorities have not yet decided to prosecute him. The court administration wants to prevent chaos, as happened four years ago in Amsterdam.

It is generally expected that the judicial authorities will decide later this month whether the PVV leader will be prosecuted for his statement about “fewer Moroccans” during an election meeting in a pub in The Hague. Yesterday, a spokeswoman for the public prosecutor in The Hague refused to say on which date the decision to prosecute will be taken, but internally it has been rumored for some time that they are aiming for September.

Wilders’ offending statement, in which he asked his PVV supporters “Do you want more or fewer Moroccans?” caused a lot of protest last March. The supporters chanted sixteen times “Less! Less! Less!” Throughout the country, more than five thousand complaints were made against Wilders for group defamation, discrimination and incitement to hatred. In addition, a few tens of thousands reports of discrimination were made through the police website.

In preparation for the possible prosecution of the PVV leader, the court in The Hague has appointed two judges to assist the media during the trial: Elianne van Rens and Hubert Nijman.

8 thoughts on “Another Show Trial?”