Elisabeth Sabaditsch-Wolff reported on Monday about a little culturally enriched incident at her local public swimming pool. Since then she and some of her fellow swimmers spoke to the municipal authorities, but to no avail.

Here’s her follow-up report, taken from the comments on the earlier post:

Both my friend and my neighbor called the municipality in charge of the pool. The lady on the other end of the phone line could/would not tell my friend how many complaints she has received, but between the lines she let it be known that her day’s fun was limited. However, the gist is: tough luck, it’s allowed. Non-Muslims are not allowed to swim in clothes (shorts and t-shirt), but the Islamic clothes (i.e. hijab, leggings, tunica shirt) are permissible. 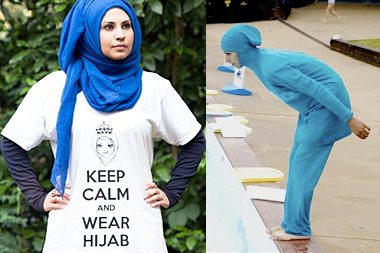 So this is how far we’ve come. The non-Muslim population must adhere to hygienic rules while the Islamic population need not. This is the new equality before the law.

How inclusive our new society has become!

The municipal authorities of Vienna are applying one set of rules to Muslims, and another set to everyone else. In other words: there is no equality under the law. The laws that apply to you depend on your religion.

The original rationale behind this particular set of rules concerns hygiene: public health is compromised when people swim in their street clothes. Yet believing in Allah does not change the hygiene of the situation, regardless of what the believers may think. How do the health officers of the Vienna city government intend to deal with any problems of illness and contagion brought on by these exceptions to the rules? Do they have a way to override the biological reality of the spread of bacteria via the water in swimming pools?

None of that matters. Multicultural concerns trump everything else, including biology. Perhaps the Viennese powers-that-be have converted to Islam, and now believe that Muslims may ignore the rules of hygiene without any biological consequence — insh’allah.

36 thoughts on “The Sharia Pool”