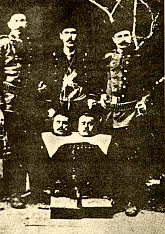 Our British correspondent JP points out a blog post by Shashank Joshi at The Telegraph entitled “Where does the Islamic State’s fetish with beheading people come from?”

The topic in itself is fairly interesting, in a grim sort of way, but Mr. Joshi fastidiously avoids the most obvious explanation for the Islamic practice of beheading infidels: it is permitted (and mandated) by the Koran, the hadith, and the sira. Mentioning that aspect of the issue presumably borders on “Islamophobia”, and we can’t have that, can we? Not under the banner of a respected outlet such as The Telegraph!

Without going into details, the author’s analysis of ISIS’ three principal strategic reasons for beheading and related activities could be summarized thus:

As is often the case on MSM websites, the comments are more interesting than the article itself. JP sends this representative selection — representative, that is, of those that were not deleted by The Telegraph’s ever-vigilant moderators.

well my comment didn’t last long!! Not to worry there are plenty of you saying the same thing. The veil has lifted…we all see what’s going on.

William Law has obviously touched a nerve. “A silly foolish blog with a silly foolish headline. The answer is more evident than the noses on the faces of most people: because they are barbarians. And you do not negotiate or be reasonable with barbarians”

I’m guessing it’s his last sentence that’s upset someone, (see above without it). What on earth has happened to the Telegraph? Who are these newbies writing nonsense? All the talent has moved on and with the time frame involved, there must be something fundamental going on.

The Islamic State are terrorising and killing Yazidis, Christians and Kurds to make themselves popular and to legitimize their rule with their fellow Sunni Arabs. When they arrived in Iraq, they were treated with suspicion by local Sunnis because they were mostly foreigners who had no place in the local tribal culture. Driving out religious minorities creates free homes, cars, land, women to rape/enslave and other kinds of property which can then be redistributed to local Sunnis, ensuring popularity and legitimacy for the Islamic State. This is precisely how Islam has operated for hundreds of years. It is how Mohammed himself operated. Expansionist, revolutionary Islam is a belief system designed to allow alienated and disenfranchised young males to live out fantasies of adventure, violence, vengeance, dominance, limitless wealth through theft and unbridled sexual satisfaction through rape.

I like the way the moderators keep deleting my comments when I point out that Shashank said the caliphate would never, ever happen, yet it was declared five days after he said that in this very publication. And there’s not even a ‘comment deleted’ – it’s just gone.

And now the rest of it. Mohammed’s jihadist career full of beheading and crucifixion, as detailed in the Hadith and Sira, not to mention commands from Allah himself to behead in the Koran.

“strike them in the neck”, “the penalty for those causing corruption in the (Islamic) land is none other than that they be killed or crucified”. And so we find ISIS beheading and crucifying today.

“Where does the Islamic State’s fetish with beheading people come from?”

Are you guys seriously trying to analyse what ISIS are doing without knowing the relevant instructions of violence in the Koran?

this is the case when facts are 100% sufficient for any type of meaningful qualification.

today’s BBC broadcasts were focused on discussion about “IS” properties, aims and traditions, islamic heritage and future, and how it is related to other types of sharia etc.

basically, this is the bogus discussion about which type of islam is good for Britain.

bogus because in reality the subject is – the way and the speed of Britain’s submission to islam, here are the 3 pillars of political islam in the West.

these are the real subjects.

there is no time to conduct long discussions aiming at proving to each other that black is black and white is white.

The answer is simple and the above analysis is superfluous. These people are savages. They understand only force, the bomb, bullet and bayonet are the only way to deal with them. As for the “Britons” we hear of out there, they are not British, any citizenship they have should be immediately revoked and they should never be allowed on these shores again.

Islam is a religion that was born out of hatred and terror, and so it continues today. The liberal elite that have allowed the followers of this backward religion to settle in Britain are to blame and if we should vent our anger we need to vent it at them first. The current incumbent Cameron has doing ABSOLUTELY NOTHING to stop mass immigration from Pakistan the world centre of Islamic terrorism.

I do not believe there are moderate muslims as their rotten religion dictates otherwise, so on that basis the Pakistanis and Bangladeshis allowed in present a huge risk to the stability of Britain. Cameron could stop immigration from these rotten countries tomorrow, so why doesn’t he?

Shashank Joshi is a Research Fellow at RUSI [Royal United Services Institute] and a doctoral student of international relations at Harvard University’s Department of Government. He specialises in international security in South Asia and the Middle East.

He holds Masters degrees from Cambridge and Harvard, and previously graduated with a Starred First in politics and economics from Gonville and Caius College, Cambridge University. During 2007-8, he was a Kennedy Scholar from Britain to the United States.

He has taught as a supervisor and teaching fellow at both Cambridge and Harvard, and also worked for the National Democratic Institute (NDI) in Moscow on electoral analysis and democratic training projects, Citigroup in New York in their regulatory reporting division, and in RUSI’s Asia Programme on India and global security issues. He is a graduate of the Columbia-Cornell Summer Workshop on the Analysis of Military Operations and Strategy (SWAMOS).

He has published peer-reviewed work in academic journals, commented on international affairs for radio and television, and written for newspapers including the New York Times, Financial Times, Telegraph, Guardian, Independent, and Foreign Policy.

18 thoughts on “What is it With Muslims and Beheading?”