Baroness Sayeeda Warsi has resigned as Foreign Office minister for the British government over the latter’s policies concerning the war in Gaza. I noticed when reading news articles about today’s events that the baroness is only slightly more Paliphilic and anti-Israel than the rest of the cabinet — the British government has already taken a fairly harsh position towards Israel.

Our English correspondent Seneca III has a few heartfelt words to say about the departure of Baroness Warsi. See the bottom of this post for excerpts from a BBC article about her resignation.

And good bloody riddance! Rumour has it that this taqiyya-peddling traitor was on the skids anyway, so this is likely nothing more than the accomplished drama queen bailing out in a blaze of self-righteous publicity before being pushed. Although, if she was to be eased out, it would have been better for the Conservative Party to have been seen to do it, and with a firm hand, as that might have encouraged me and a few others like me to return to the fold.

Nevertheless the upside is that we will no longer end up involuntarily vomiting over our bacon and eggs when opening a newspaper and being faced with photographs of her handing out millions of our tax monies to her extended family in Pakistan (a.k.a. The World’s Biggest Lunatic Asylum)… 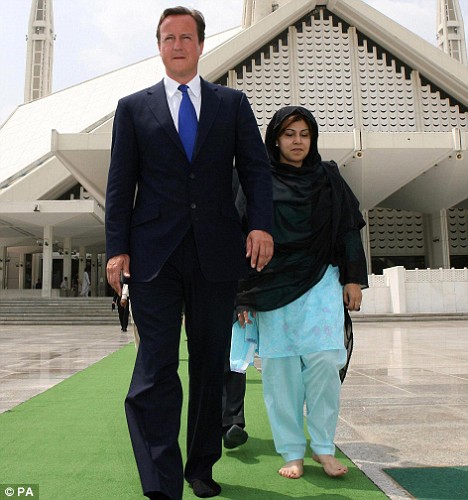 …with that gurning clown “It’s nothing to do with Islam” Cameron — who appointed her to the upper house and made her a Minister — standing in front her smirking face like a spare bridesmaid (or something else) at a wedding. Hallelujah!

But, for the record, here’s what she said just after Hamas was elected and before they set about murdering their Fatah political opponents left, right and centre and waging war on Israel:

“I think what’s happened in the Middle East with the election of Hamas is actually an opportunity and I think that’s the way we’ve got to see it. When groups that practice violence are suddenly propelled into power through a democratic process they get responsibility and responsibility can be a tremendously taming factor.”

…whereby demonstrating either her full commitment to her Jihad disinformation project or the fact that she actually is as thick as two short planks.

Foreign Office minister Baroness Warsi has resigned from the government, saying its policy on the crisis in Gaza is “morally indefensible”.

She wrote on her Twitter feed that she was leaving with “deep regret”.

Lady Warsi, who was previously chairman of the Conservative Party, became the first female Muslim cabinet minister when David Cameron took office in 2010.

The prime minister thanked her for her “excellent work”, adding that he wanted an “unconditional ceasefire” in Gaza.