Pro-Palestinian demonstrators rallied in Vienna today, as they did in major cities across most of the Western world. In comparison with the “third intifada” now underway in Paris, the Vienna event was mild and peaceful (see the photos at ORF.at).

Austrian voices in support of Israel are relatively rare. One of them is Christian Ortner, who has written an impassioned plea in Die Presse on behalf of the Israelis. Rembrandt Clancy has translated Mr. Ortner’s opinion piece, which is preceded by an introduction from Elisabeth Sabaditsch-Wolff. 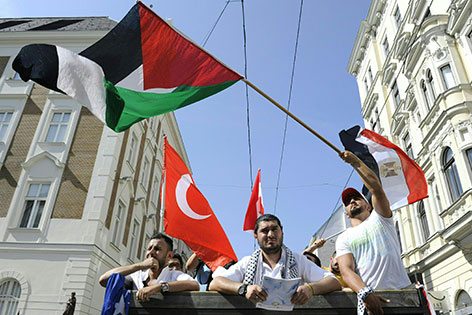 Christian Ortner is a self-termed neoliberal and proud of it. He is the author of several scathingly honest essay-books about the state of Austria and the rest of Europe with regard to current affairs. He is very critical of Islam and the Islamic Faith Community in Austria, frequently writing commentaries about Islam. So it is only natural that Ortner would side with Israel in the current stand-off in Gaza.

Christian Ortner has composed a speech to be delivered by the Austrian government, along the lines of that by Czech president Milos Zeman, but one he is sure will never be delivered. Unfortunately, he is very right in his assessment. Official Austria is eerily quiet about Israel. The comments section in Die Presse shows the rampant anti-Semitism still present in Austria, thanks to Eurabia.

Not-so-official Austria — i.e. the Palestinians and their “friends and allies” — marched in Vienna’s city center this afternoon. Following the recent, often destructive clashes in other European cities, Austrian authorities called for restraint on the part of the demonstrators. It appears their calls have been heeded. I have been told by eyewitnesses on the ground that this restraint may have been due to the massive police presence, while at the same time nearly thirty Jewish facilities were heavily protected.

Whether this situation is sustainable remains debatable. In any case, it is interesting, as noted by Vlad Tepes, to see different strategies employed around the world.

Many underage boys and girls collapsed due to the heat (35°C, 95°F) today. It was painful to watch the suffering of the children. Water was distributed by police union members, but was refused, due to Ramadan.

Adults were exhausted as well. They remained standing in the shade. Many did not continue marching because of the heat.

None of the demonstrators said a word about the Geert Wilders button my contact wore.

The atmosphere was calm. Every five minutes there were chants of “Allahu akhbar!”

Dolls wrapped in white cloth spattered with blood were held.

Let us All Become Israelis Just Once for a Single Moment…

A Speech which the Federal President, the Federal Chancellor, the Vice-Chancellor or otherwise any other Politician will unfortunately not make.

Allow me to stress one thing, free of all ambiguity and with all possible clarity: in view of the rocket attacks by the Islamic terror organisation Hamas on Israeli cities and villages, on children and the elderly and on kindergartens and hospitals, Austria stands unambiguously and without reservation on the side of the state of Israel in this confrontation. And I would like to think that the newly elected President of the European Commission, Jean-Claude Juncker, would likewise explain this clearly and unequivocally in the name of the European Union. 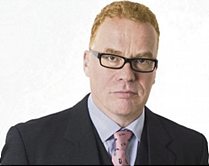 In order to avoid misunderstandings, the reason we are standing on the side of the Israelis is not so as to remove thereby any possible historical guilt on the part of Austria toward the Jews. The present generation of Austrians bear no responsibility for the holocaust and they have to recompense that guilt to the least extent possible.

Therefore, Austria does not stand on the side of Israel because Israel is a Jewish state. Austria stands steadfastly on the side of Israel because she is taking the only position which is right. When a democratic, constitutional state is attacked with thousands of rockets by a terrorist organisation, there can be no neutrality between terrorists and the state which is attacked; just as there can be no neutrality between armed hostage takers and police. With good reason we were not impartial with respect to al-Qaida and the United States after the 9/11 attacks; by the same token, we cannot and must not remain impartial when faced with Hamas’ terrorism against the Jewish state.

Personally, my fellow countrymen, I remain very happy today that during the Second World War the allies did not attempt to bring to a halt the “spiral of escalation” between themselves and Nazi Germany; and I am particularly pleased that the USA did not, for example, attempt to mediate between Hitler and Churchill, but stood clearly on one side: — on the right side.

After 1945 Austria often pursued — too often by my way of thinking — a foreign policy driven exclusively by her own short-term economic interests. Prior to the collapse of Communism and the Soviet dictatorship, we snuggled up to the dictators there for far too long a time instead of standing behind the dissidents; and also, in the quite recent past we have placed the security of our energy supply above the security of other Europeans being pressured by an authoritarian regime. I would not wish to make this mistake once again in the case of Israel.

Allow me the opportunity of correcting a few errors which have been widespread in Austria. The Gaza Strip, from which Israel is being attacked, is not a “concentration camp for Palestinians”; rather, Israel is supplying it daily with hundreds of tons of food, medicines and other life necessities. Israel even delivers electricity, without being compensated for it. Only a few days ago Israeli technicians repaired a power supply line to Gaza which had been destroyed by a Palestinian rocket, so that Gaza is again being provided with electricity — and in making the repairs, the technicians risked their lives because Hamas launched more rockets.

Contrary to what is widely assumed, these rockets are also not “improved fireworks”. Of these, the most powerful currently being fired at Israel can carry a bomb load of 150 kilos — there is not one of you, my esteemed countrymen, who would like to see something of the kind slam into his living room.

Finally, it is also nonsense that Israel is defending itself militarily with disproportionate strength. Although three out of four inhabitants of Gaza voted for Hamas, Israel’s air force warns the civilian population before every attack. Israel, my dear countrymen, has every right in the world to defend itself against this terrorist onslaught on its population, and Austria will defend Israel against every attempt to deprive Israel of this right.

It is certainly nothing more than a gesture in any case; but it is a gesture which is of urgent necessity.

Christian Ortner is a columnist and author in Vienna. He directs “Ortner Online: The Central Organ of Neoliberalism”.

9 thoughts on ““We Cannot and Must Not Remain Impartial””