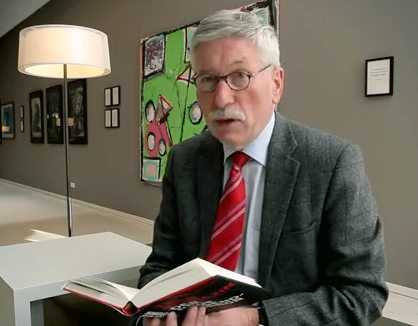 Thilo Sarrazin is a best-selling author and former director of the Bundesbank who became controversial a few years ago in Germany due to his politically incorrect views on immigration and Islamization. He has just published a new book that is being relentlessly panned before it is even published, by people who have not even read it.

JLH has translated a brief interview with Mr. Sarrazin that was published earlier this month in Die Preußische Allgemeine Zeitung. The translator includes this note:

Thilo Sarrazin has done it again. This interview is about his third book — like the first, it has a title on which there will be a committee decision on how to render it into English (I just took my best shot) — but essentially it is about the PC-ness of the media, and the [ordure]-storm that is already building up. You may be amused to discover that, like the attacks on Diana West, this altercation too has at least one adamant critic who not only hates the book, but does not intend to read it.

When the Only Thing That Matters is the Attitude

Thilo Sarrazin has recently published his new book on “virtue terrorism”, to which he immediately fell victim

With Germany Abolishes Itself and Europe Doesn’t Need the Euro, the former Berlin finance senator and ex-federal banker has, to be sure, produced two bestsellers, but he has also become an object of hate for the powerful. In the PAZ (Preußische Allgemeine Zeitung), he accounts for how he evaluates the debates about his book and what makes him think. Questions are put by Rebecca Bellano.

PAZ: Before The New Terrorism by Virtue — On Freedom of Expression in Germany has even appeared, journalists are lining up to trash it. The Tagesspiegel internet site, for instance, called it “a drawer-full of dangerous nonsense.” At the end, the author emphasizes that he doesn’t even want to read the book. How do you as an author deal with this attitude and the widespread hostility?

Thilo Sarrazin: Advance critical reviews by writers who admit they have not even read the book are both amusing and characteristic. Amusing because the reviewer is making himself laughable; characteristic because he confirms the media criticism I apply in the book. An attitudinal journalism, strong in its principles, will stop at nothing to discredit and ridicule questions and perspectives it opposes.

PAZ:In your latest publication, you basically take up all the statements you were criticized for, and confront your opponents with numbers and studies. Which of these subjects is especially important, that is, in which cases do you most want to convince the people?

Sarrazin: In my new book, I turn the tables and put myself in my opponents’ shoes. I formulate 14 axioms of the PC madness that is rampant in the media — all of them revolving around the ideology of equality. I first formulate each of these axioms with the greatest consistency from a pro position. This consistency vividly exposes their hollowness. Then I contrast this to the very different reality, and in this way, theories and analyses from the previous two books reappear. But it goes beyond that. Everything in the ideological viewpoint that I am critiquing is interconnected. That was especially enlightening for me.

PAZ: You write that — viewed historically — the collapse of societies because of their internal narrow-mindedness is the rule rather than the exception. What do you believe Germany will most likely founder on?

Sarrazin: We all know that we will die, but not when, how and why. This ignorance is also a blessing. The same is true for states, nations and societies. They are all finite and they will all go under sometime. Then something new will come along; the end of humanity is still far away. If you analyze such downfalls, the causes are seldom only military, but rather those internal blind spots which prevent a measured reaction to the challenges of the present and future. In Germany Abolishes Itself, I show how it could end for our country. I carefully avoid any prognosis. It is a little like medicine. Heavy smokers greatly endanger their health. Nonetheless, one must be cautious with the prognosis of lung cancer. Helmut Schmidt, for example, to whom I wish long life, will not foreseeably die from the effects of his cigarette smoking.

PAZ: You characterize the media as the custodians of a pseudo-reality. How should we understand that?

Sarrazin: I am criticizing a dominant trend, not the media in general. Where ideology and wishful thinking dominate, the processes of the healthy human intellect clog up and out comes a distorted picture of reality. Did you know that, according to the OECD (Organization for Economic Cooperation and Development) definition of poverty, the percentage of poor in Italy is higher than in Romania, and in Germany higher than in the Czech Republic? This results from the concept of relative poverty — a product of the ideology of equality — and all the poverty reports in the German media are constructed on this concept. And in this process, the fact is obscured that a German “poor person,” by worldwide standards, is rich.

PAZ: How can you explain the fact that you write one bestseller after another and yet bring about no change in public opinion or in the voting habits of citizens (cf. the last national elections)?

Sarrazin: I don’t know if my new book will be a bestseller. Hoping for that would presumptuous, and it would also make me queasy to think that it would be possible to somehow affect the course of world history with a book. Marx’s Das Kapital may have altered the world, but certainly not for the better. The influence of a book on public opinion is more or less like a stone thrown into a lake. It is a great accomplishment if it is possible for a few seconds to see the resulting waves circle outward and eventually mix with the other waves. It is possible to speculate endlessly about causality in the real world. Sometimes a book can be like the sweep of a hummingbird’s wing in the Amazon basin, which ultimately causes the eruption of a volcano many thousands of kilometers away.

PAZ: How do you evaluate the public reaction to the referendum in Switzerland?

Sarrazin: The German media are sneering and insulting the majority of the Swiss people, because they failed to heed the higher wisdom of foreign commentators, and have made it clear that they themselves will decide who is allowed to live on Swiss land. Now it is clear to everyone that the participation of the people must be avoided at all costs, if European integration is to be pushed forward. After the rebellion of June 17, 1953, Bertolt Brecht said: “The people have lost the trust of the government. Would it not be simpler for the government to dissolve the people and elect a new one?”* It is wonderful how a great poet can bring things into focus.

24 thoughts on “The Axioms of PC Madness”