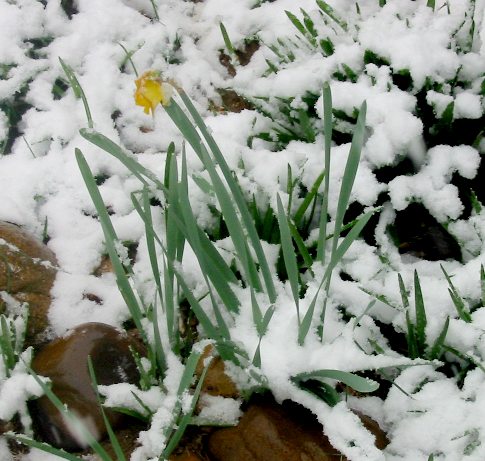 The days of attending parades in South Boston are long past, but still… this snow stuff is getting old. In our part of Virginia no one drinks green beer or sings malty songs, unfortunately. Instead, March 17th is the traditional day to plant peas and onion sets, and put in lettuce plants if you have them. Otherwise scatter seeds and cover them before the birds can see what you’re doing.

Yesterday it was seventy degrees [21°C] and we worked in the yard, removing winter debris.*

Today it is thirty-six [2°C] and what began as rain is finally sticking on the trees and grass. No mention of ice, faith and begorrah. Just six to ten inches of snow starting “sometime” tonight and continuing into tomorrow afternoon.

So will we be here? Definitely.

Will the electricity remain on? Probably. But we’ll fill the bathtub anyway. Just in case the ice moves a bit west.

Are they predicting ice for Schloss Bodissey? Just “a trace”; thus what starts in Richmond should oughta stay there in Richmond, in our humble opinion.

Dumb, dumb, dumb. The Baron warned me, but the first day out is always the most beguiling. As a result I ended up almost crawling into the house. Nor was all that suffering done quietly. Over the years, it’s become apparent that if fibromyalgia pain is accompanied by lashings of whining and gnashing of teeth, these behaviors scare the Pain gods and thus act as an analgesic. Kind of.

Later, when I could think and form words enough to ask, the Baron helped me cut up lidocaine patches and paste them on different muscles and tendons: calves, trapeziuses, etc. Those slippery things don’t stay on well [the patches, not my muscles], so I’ve learned over the years to affix them with a paper-type bandage tape (you can find anything on Amazon). Now we no longer find a trail of pain patches through the house. And when I took the things off this morning, removing that paper wasn’t painful either.

Next, I’ll write one hundred times: Gardening is limited to twenty minutes a day no matter how good I claim to feel.

4 thoughts on “Saint Patrick’s Day Snowed Out… or In, Depending”