Enza Ferreri takes a look at the worldwide issue of the persecution of Christians, which barely merits a whisper in the mainstream media or by Western governments. 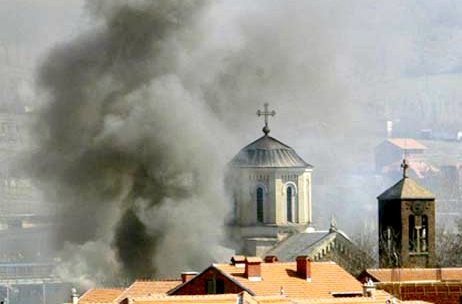 Raymond Ibrahim’s fundamental new book Crucified Again: Exposing Islam’s New War on Christians Amazon USA), (Amazon UK), has been widely reported, covered and praised and does not require an introduction, but it prompts a reflection.

The problem of discrimination against Christians and their persecution by Muslims is in fact two problems. Like unpunished crimes’ victims who suffer twice, for the crime and for the injustice of the criminal’s going scot-free, while the atrocities committed against Christians are unbearable enough on their own, the total indifference of the rest of the world adds to the pain.

Floods, earthquakes, natural calamities and man-induced ones like the recent collapse of a factory in Bangladesh attract lots of media coverage and offers of foreign aid, but this does not happen with what Raymond Ibrahim has rightly called “arguably the world’s greatest humanitarian crisis” and Andrew McCarthy “the great unspoken civil rights issue [and] scandal of our day”.

How much Western governments care about the plight of the Christians living in Muslim-majority countries can be seen by how indifferent they were to the systematic discrimination of which Pakistani Christians, during that country’s 2010 devastating floods, were victims in the distribution of aid — essential to survival — ironically donated by those very same historically Christian Western countries.

The Vatican, to its credit, was one of the few to highlight that injustice. I have never heard of a Western government — or any other government, for that matter — giving aid to Pakistan on that occasion only on condition that a fair and equal distribution was guaranteed.

In Islam “charity” has a different meaning from the Christian one, being a duty extended only to other Muslims. This semantic difference reflects that pseudo-religion’s division of humanity into the Muslim Ummah and the infidels, groups with very unequal status, whereas Christianity proclaims the equality of all human beings:

Allah has bestowed His gifts of sustenance more freely on some of you than on others: those more favoured are not going to throw back their gifts to those whom their right hands possess, so as to be equal in that respect. Will they then deny the favours of Allah? Quran (16:71)

There are theories that aspire to be scientific and are not — the many alternative medical disciplines, for example — and paintings or sculptures whose authors consider art but nobody else does. Similarly, Islam claims to be a religion but it fails the crucial tests for being one: making its faithful better persons and embracing reciprocity, one of the most fundamental, indeed basic, rules of ethics. Hence my choice of the appellative “pseudo-religion”: pretending to be a religion but not being one.

Foreign aid could in fact be used as a tool for Western governments and charities to demand equal treatment of Christians and other minorities in Muslim countries as a pre-condition for receiving that aid.

I have once provocatively advanced the proposal to give Pakistan, which is one of the world’s worst offenders in the persecution of Christians, “the South-African treatment”, isolating and repudiating it from the international community, which in the case of South Africa put pressure on Pretoria and played a big role in ending apartheid. The British Commonwealth, of which that country was part, turned out to be particularly important in this process. Pakistan is also a member of the British Commonwealth, from which it should be banned until it abolishes its blasphemy laws.

South Africa’s bans from sporting events were also used as effective means of pressure, and so could the banning of Pakistan from Commonwealth Games, Cricket World Cup, and similar events.

The obstacle is, obviously, the lack of political will.

The British Pakistani Christian Association’s petition calling for an end to British foreign aid to Pakistan until human rights improve has been rejected because “stopping UK aid to Pakistan will not accelerate progress on human rights and will only make conditions worse for the millions of poor and marginalized across the country, including the Christian community”, although the organization is still collecting signatures for the petition:

We the undersigned petitioners believe that any aid given by Britain to Pakistan should have approriate [sic] accountability and traceability. We urge the Government of the UK to ensure that a significant proportion of the £225m given in aid last year for improvents [sic] to the educational provision in Pakistan, is used to level the diasparity [sic] of opportunity between minority faith groups and the Muslim majority. We call for this disproportionality to be set as a priority before and above overall holistic educational reform. Only 7% of minority people in Pakistan attain an adequate level of literacy and 86%of minority people work as janitors, sewarage [sic] workers or domestic servants.

We also call for the UK to use the commitment to provide aid to challenge the Government of Pakistan to take tangible steps towards a better human rights record (currently 125th out of 160 countries on UN Development index).

Another measure that the West could implement is that of giving preference to Christian asylum seekers and immigrants over others.

In April a Dutch Members of Parliament “offered to consider special status for Christian asylum seekers and refugees fleeing extremism in Pakistan, after hearing a report from Wilson Chowdhry of the British Pakistani Christian Association”.

This was also the idea of Cardinal Giacomo Biffi, Archbishop of Bologna, one of the few high-ranking Catholic clergy with a realistic, non-appeasing approach to Islam. He wrote in September 2000 that, not for religious reasons but purely to favour the peaceful integration of immigrant communities into Italy, we should favour Christian immigration.

To his motivation we can add the great Christian humanitarian crisis. For two reasons we should be particularly concerned about it: first, the numbers; it is estimated that one Christian is killed every five minutes just for his/her faith, giving it priority; second, our particular relationship with the Christian world.

The West owes its existence to Christianity — along with Greco-Roman civilization — and in fact I consider the two terms synonymous. Christians the world over are culturally, if not geographically, part of the West: but then the West is a cultural, more than a geographic, concept.

So, although we should be concerned about all — not just Christian — oppressed peoples of the world, I think that we Westerners owe a particular debt of gratitude to these brothers and sisters who are discriminated against, persecuted and victims of violence just for being Christian, and despite that they keep their faith alive, the same faith that we take so much for granted that we have lost it.

They are martyrs in the true etymological sense of bearing witness to the value of the Christian faith.